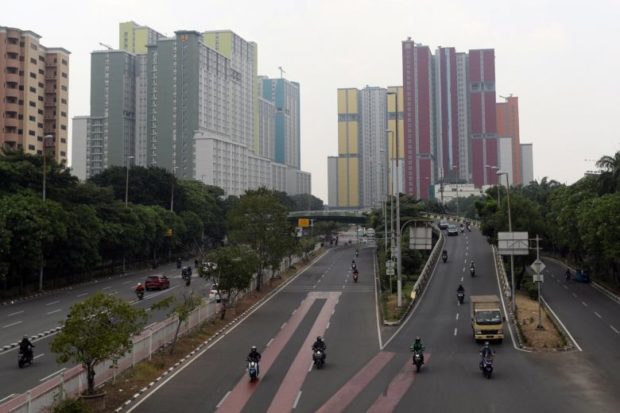 Jakarta will have to endure tighter restrictions again for the second time from Sept 14.PHOTO: EPA-EFE

JAKARTA — Residents of Indonesia’s capital are despondent – angry, anxious and pessimistic about the future.

This follows the announcement that Jakarta will have to endure tighter restrictions again for the second time from Monday (Sept 14) as Covid-19 cases rise inexorably in the city of more than 10 million.

Entertainment venues will be shut, restaurants and cafes will offer only deliveries and takeaways, and staff in non-essential sectors will work from home.

When restrictions – better known here by the local acronym PSBB – were first imposed on April 10, the initial public reaction was that of fear of getting infected.

But not so this time around. Many, in fact, were hoping that Jakarta Governor Anies Baswedan would call off the measures.

Fishcake soup seller Okky Satria, 27, told The Straits Times: “I feel like a ping-pong ball, bouncing back and forth.

“Why must we go through this again? People in other countries never had to. When the government lifted restrictions, they should be for good,” he said.

Then he got angry, mostly at those who ignored safe distancing measures ,as well as at the government for not enforcing discipline and coming down hard on the rule flouters.

“I hate people who do not wear masks. Frankly, I have declined to serve anyone without a mask. They are the biggest culprits,” said Mr Okky who is now expecting business to nosedive.

He said his daily takings had started picking up only two weeks ago, reaching five million rupiah (S$460) on weekends, which was only half the amount he used to make before the pandemic gripped the city in March.

“I’m just so disappointed now. The government should have been stricter,” he said in resignation.

Most residents, perhaps grudgingly, now accept the need to reinstate tougher measures but the impact on livelihoods is hard to swallow.

“This is the time for us to unite and work together to fight this virus,” he added.

Mr Anies was forced to reinstitute tough measures after the spike in cases put a massive strain on Jakarta hospitals and its healthcare workers.

The crisis has rendered millions of Indonesians jobless, and analysts have warned of a sharp rise in the ranks of the poor. Inevitably, South-east Asia’s largest economy of 270 million – like many others around the world – will suffer its first recession in more than two decades.

Informal workers and the urban poor have borne the brunt of the economic fallout from the pandemic, and many are believed to have left Jakarta in recent days to return to their villages.

Mr Muhammad Rusli, 47, who runs a motorcycle steam wash shop in South Jakarta, said his neighbor had returned to his village in Subang, in West Java province.

“He has no choice, as he will have zero income. At least back in his kampung, he can survive, as his parents and other relatives will help him,” said Mr Rusli.

Mr Rusli is already anticipating a cat-and-mouse game with the authorities because he expects to continue operating his business despite the restrictions.

“When they come, I will close my shop. When they leave, I will reopen. They don’t have the right to tell me to stop earning money,” he said in frustration, adding that he had three children to feed.

He said: “Why worry about the coronavirus? Death and diseases are God’s will. Anyone, even the government, should not intervene, otherwise it would be a sin.”

Roadside vendor Herman, who sells hair accessories from a pushcart also said he would “continue to roam the streets”.

“I’m only worried about having fewer customers,” he said.

Understandably, most people are worried about bread and butter issues.

Mr Hajoran Siregar, 49, who rents out dormitory rooms to office workers in the Jakarta business district, said only half of his property is currently occupied.

“We used to be full house. Some of them left because their office decided to let everyone work from home until year-end,” he said.

A check with mosques, supermarkets and wet markets found business as usual at most places. Unlike in April, there was no sign of panic. Five months ago, harried shoppers could be seen clearing the shelves as they stocked up on instant noodles, bottled water and other food staples.

“We have gone through a lockdown before. I’m sure things will run normally. The last time I stocked up on food, nothing happened. Why panic now?” said a shopper, who only wanted to be known as Agus.

He was less indifferent though about the prospects for his shrimp rice business.

“I’m not worried about Jakarta running out of food but I’m anxious about whether I can afford to put that food on the table for my family,” he said.