TAGBILARAN CITY, Bohol, Philippines — Six-year-old Arvin Jay Curangcurang wakes up early to be able to make it to his class at 7:45 a.m. But instead of heading to his classroom, he walks about 600 meters from the family’s house and climbs a makeshift treehouse on top of a hill at Barangay Cabatang in Alicia town, Bohol province.

Arvin, a Grade 2 pupil of Advance Christian Academy-­Banawa Inc., attends online classes after in-person sessions have been canceled by the Department of Education (DepEd) to prevent the spread of the new coronavirus disease (COVID-19).

Before classes opened on Aug. 18, his family built a “treehouse” on a gmelina tree growing on a hilltop — the only place in their neighborhood where cellular phone signal is strong.

The treehouse is made up of wooden planks for floor but has no walls. A tarpaulin sheet serves as roof.

It has a small table and a small chair to make Arvin comfortable during his online classes.

His smartphone is set up on a small table, leaning on the trunk, to keep it steady while the young boy listens to his teacher. 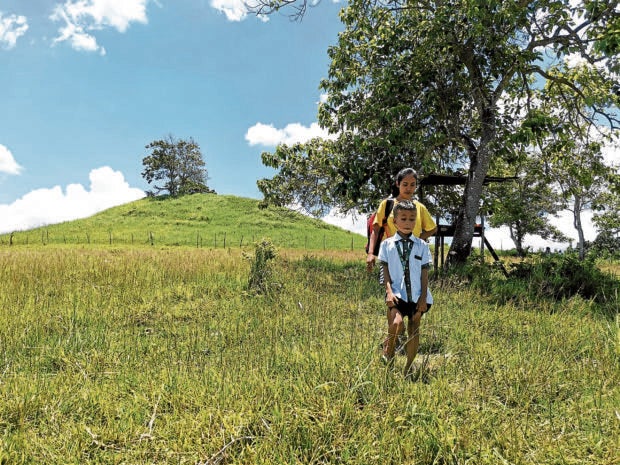 OUTDOOR ‘CLASSROOM’ Giecel Marie Curangcurang makes sure that her nephew, Grade 2 pupil Arvin Jay, will continue learning despite the pandemic as she accompanies him weekly, from Monday to Thursday, to a tree house in their village of Cabatang in Alicia, Bohol, for his online classes. (Photo by LEO UDTOHAN / Inquirer Visayas)

“We really have no signal at all. We can’t even send a text message. Sometimes, we have a signal at an elevated portion in our place but only for a short while,” she said.

The only spot where a signal is somewhat steady and clearer is the hilltop overlooking the village pastureland.

Giecel, 22, stays by Arvin’s side at the tree house during his classes, Monday to Thursday, from 7:45 a.m. to 11 a.m. She borrowed an Android phone and a pocket Wi-Fi from her brother and a relative so Arvin could have gadgets to use for his classes.

Arvin is an only child. His father, a security guard, and his mother, a factory worker, lost their jobs in Metro Manila and could not leave the capital region due to travel restrictions imposed by the government to contain the spread of COVID-19.

The tree house was inspected by Pastor Eleazar Banawa, the school administrator, to ensure Arvin’s safety.

Banawa had told the family not to bring the boy to the tree house during heavy rain since the area was landslide-prone and exposed to lightning. He was also concerned about snakes in the area. 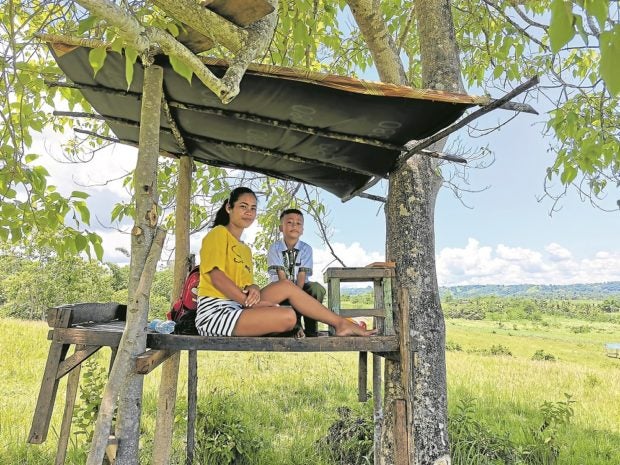 HILLTOP SANCTUARY A makeshift tree house, made from wooden planks and a tarpaulin sheet, may not be the most comfortable learning space for Arvin Jay Curangcurang but it is the only area in their neighborhood in Alicia, Bohol, where mobile phone signal is fairly reliable so the boy, guided by his aunt, Giecel Marie, can attend classes now held online while the country deals with the COVID-19 crisis. —LEO UDTOHAN

He assured the family that the school would provide a module, as well as video and audio recordings, if Arvin would not make it to his online classes.

Giecel said the family was striving hard so Arvin could continue going to school.

“Nobody really wants this but we’re in it, so we’re going to try to make it work. It’s most important for students that teachers and parents remain optimistic, patient and just work through each issue as it comes up,” she said.

But the main problem remained a reliable internet connectivity and cellular phone signal.

When the Inquirer visited Arvin while he was attending his online class, the signal was good and steady only for the first 20 minutes.

Giecel said there were times when they would spend several minutes to log in for video calls. The four-hour class, she said, would be interrupted by either poor or lost signal.

“I hope there will be a reliable signal so that I can attend my class with my classmates and teacher,” Arvin wished. 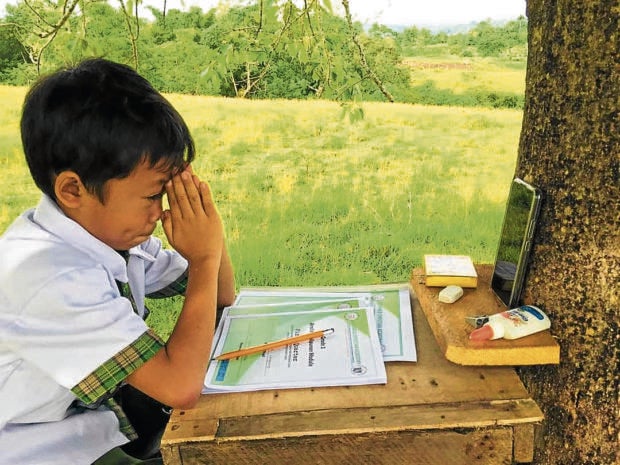 Many students from low-­income families like Arvin’s lack the basic technology needed in this supposed “new normal” brought about by the pandemic. They do not have proper gadgets, like laptops and smartphones, and reliable broadband connection.

Since Bohol is among the areas in the country suffering from poor connectivity, the DepEd in the province is struggling to keep learning accessible to all amid the pandemic.

In its report to the provincial board on Aug. 26, the DepEd said 61 percent of schools in the province did not have internet connectivity while 39 percent had limited internet access (insufficient bandwidth given by providers).

It is also more problematic on island-barangays because of limited power supply. Only 2 percent have electricity.

The figures were lower compared to the total number of enrollees last school year, which reached 285,254.

But among the 933 public elementary schools in Bohol, only one will go full digital learning once classes start on Oct. 5.

This means students can download lessons in a chat room, or any chosen platform, with no teacher-student interaction.

But for students of 533 schools, printed modules would be delivered to them so they can study and answer quizzes and examinations in the comfort of their homes.

At least 351 schools want a combination of online classes and printed modules.

For the 185 public secondary schools, 29 are planning to go into online modular learning, while 129 will rely on printed materials delivered to students’ homes. At least 27 others will go full digital.

But the DepEd’s report showed that not only students were finding it hard to cope with learning amid the pandemic.

Of the 12,848 teachers in Bohol, 78 percent do not have information gadgets, such as laptops, tablets or desktops, while 22 percent have insufficient number of functional computers in schools.

Only 37 percent of guardians or parents were willing to participate in the training for online learning, the report said.

But even if the parents were trained, there was also the problem of connectivity.

To solve the problem on lack of internet connectivity, the DepEd was eyeing radio stations and local cable providers to air its learning programs to be able to reach more students.

The agency was still in the thick of negotiations with local radio stations, especially in Carmen and Jagna towns, where internet signal is absent.