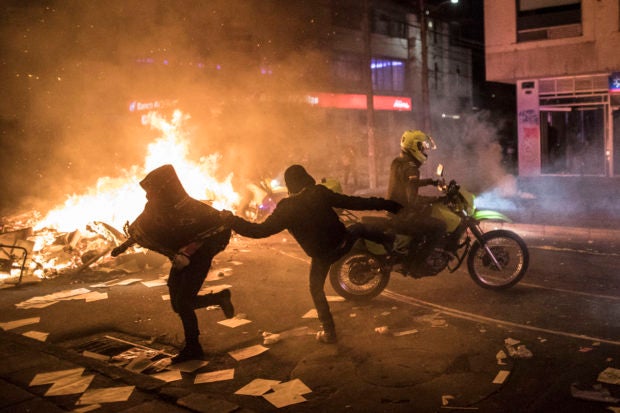 A demonstrator kicks a police officer during protests sparked by the death of a man after he was detained by police at the Villa Luz neighborhood in Bogota, Wednesday, Sept. 9, 2020. Javier Humberto Ordonez, 46, died in hospital after receiving repeated electric shocks with a stun gun from officers who detained him for violating social distancing rules to curb the spread of the coronavirus. (AP Photo/Ivan Valencia)

BOGOTA, Colombia  — Two days of protests in Colombia over the death of a man in police custody have left 13 people dead and over 400 injured, authorities said Friday.

The Defense Ministry reported 13 people dead, 209 civilians injured and 194 officers hurt. Dozens of city buses were vandalized, including 13 set ablaze. Sixty police precincts have also been damaged during the unrest.

As the city emerged from the violence, Defense Minister Carlos Trujillo Holmes offered an apology on behalf of the police for any illegal acts committed during the Ordóñez’s detention early Wednesday morning.

He said a disciplinary hearing has been ordered to determine whether officers committed homicide and abuse of authority. The chief prosecutor’s office will determine if criminal charges are filed.

Seven officers have been suspended as the probe advances.

“The National Police ask for forgiveness,” he said.

The violence erupted after Ordóñez died early Wednesday following a confrontation caught on video by witnesses showing two officers pinning him down and tasering him while he begged them to stop.

He was taken to a police precinct and later a hospital, where authorities say he arrived without vital signs.

The incident sparked a wave of anger over excessive use of force by the police. It comes at the same time as massive protests over racial discrimination and police abuse against Black citizens in the United States.