A tape measure oddly slung around her neck, Charito Sanchez, 64, walks in and out of the Tañong Health Center in Marikina City, busily checking patients’ vital signs and medical records.

There are four patients on this sunny Friday morning. She tells one recently diagnosed with hypertension to sit and wait her turn, and then, after consultation and just before leaving the center, to remember to take her maintenance medicine and to have her blood pressure rechecked.

Sanchez is a barangay health worker (BHW) who assists the doctor and nurses assigned at the center. Until her shift ends at 5 p.m., she will continue to attend to and interact with visitors and patients, all potential carriers of the new coronavirus that causes COVID-19.

She belongs to an age group with high risk of infection, but she performs volunteer work in her community and is one among many unsung heroes and frontliners in the country’s fight against the “invisible enemy.”

“It is really hard for us given our age. Just like everyone else, we are scared of getting the virus. But we are doing this for public service,” says Sanchez, a volunteer for the past 20 years.

As stated in the Barangay Health Workers’ Benefits and Incentives Act of 1995, BHWs are trained in accredited government or nongovernmental organizations and “voluntarily render primary health-care services in the community.”

They take part in house-to-house visits for vaccination and immunization drives, keep medical records and monitor the health status of community members­—demanding duties made even heavier by the COVID-19 pandemic. In distribution activities, Sanchez and her colleagues readily sense the revulsion of the residents who would take cover behind their doors while receiving medicines from the BHWs.

“Nandidiri talaga sila,” Sanchez says. “But that’s OK. We understand that they’re just trying to take precautions and keep themselves safe from the virus.”

And there are those who refuse to admit being sick, thus making the job more difficult. “We never really know if we’re talking to a COVID-19-positive person already,” she says.

In exchange for her service to the community, Sanchez receives a monthly honorarium of P1,500 from the barangay, which, she says, she spends for the additional needs of her grandchildren.

Fortunately for her, the amount serves as a spare fund because her husband and children are employed.

Not so for Edita Platon, 60, a BHW in Barangay Kabalyero, San Antonio, Cavite City, the breadwinner of a family of five.

“It’s really not enough to support my three grandchildren,” Platon says of the P1,500 honorarium. “Even if I’m a senior citizen, I still work to make a living.”

She tries to make ends meet by cleaning her niece’s house or looking after her other grandchildren when their parents are working. “I receive a little help from them by doing those chores. That means a lot to me, and thankfully, we are still surviving,” she says. 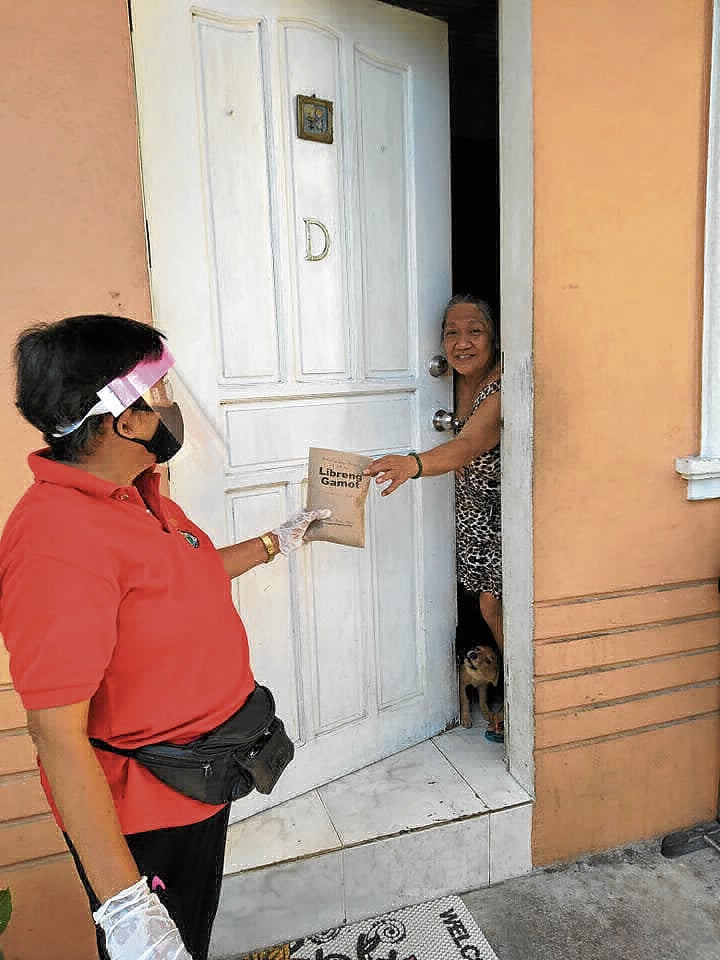 NEIGHBORHOOD ROUNDS During a house-to-house visit, barangay health worker Charito Sanchez, 64, gives away free medicines to residents of Barangay Tañong in Marikina City, reminding them to immediately see the doctor if they are ill and informing them of the services available at the local health center. —CONTRIBUTED PHOTO

Like Sanchez, Platon tends to her community by assisting midwives, accompanying health workers in administering the polio vaccine, doing house-to-house visits for follow-up consultations and—now a dreadful task for them due to the pandemic—contact tracing.

“My experience has been far from easy, especially now with COVID-19,” she says. “I’m always afraid that I might get infected, but I need to help my neighbors and ensure their safety.”

As though risking their lives to serve their barangay was not enough, Platon and other BHWs are greeted with, not gratitude, but resentment, mostly from the same people they are trying to help.

Because BHWs are in charge of reminding other residents of the necessity for follow-up consultations, or announcing the health services offered by the barangay, some make them feel like a nuisance that causes inconvenience when they are actually doing their job.

BHWs are now also at the receiving end of anger from community members because of the contact-tracing system.

“When they find out that someone in the barangay has tested positive for COVID-19, they get mad and say, ‘Why didn’t you tell us?’ Then they would pour out their anger in text messages and calls, blaming us for not telling them when in fact, we cannot disclose the information because it’s confidential,” Platon says.

Other BHWs in rural areas also have to endure the heat of the sun or muddy roads just to check on community members.

They climb mountains in the course of making house-to-house visits, and meet with all sorts of mishaps, including getting bitten by a resident’s pet dog.

Medical anthropologist and Inquirer columnist Gideon Lasco wrote about barangay health workers as “unsung heroes” as early as 2018, noting the “rarely felt appreciation” of their role in community public health. He said this attitude resulted from the lack of discourse and policy briefs related to BHWs.

According to Barangay Health Workers Rep. Angelica Natasha Co, BHWs are mostly female senior citizens who have been in the service for years. “Some of them were still bachelorettes when they started volunteering,” she says.

Co says she wants steps taken to uphold the welfare of the BHWs, pointing out that most of them are vulnerable to disease and are serving at the front lines, especially in poor communities.

In 2019, she filed House Bill No. 3985, or the Barangay Health and Wellness Reform, which aims to standardize the allowance and benefits of BHWs.

But the bill remains pending at the committee level at the House of Representatives, indicating that the much-needed lifeline for volunteers like Sanchez and Platon will take a long time coming.

In the meantime, says Co, the party-list group is extending as much help as it can to all BHWs affected by the pandemic through donations from private organizations and its existing funds.