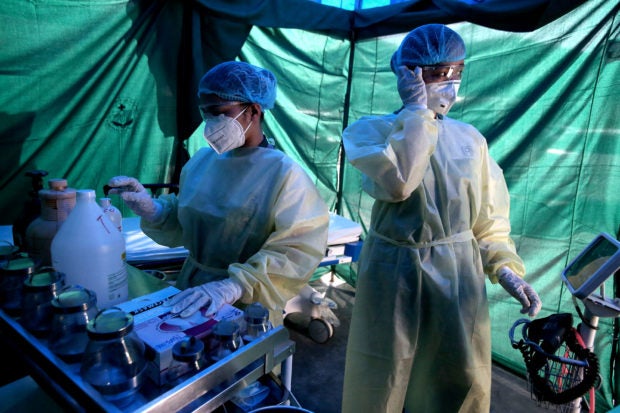 MANILA, Philippines — Bacolod City Mayor Evelio Leonardia on Friday appealed to the national government to prioritize the city in the deployment of healthcare workers.

In a televised briefing, Leonardia said the city does not have enough healthcare personnel to man its hospitals and quarantine facilities.

“In Bacolod, we have 1,276 beds in seven hospitals. Out of that, 246 have been allotted for COVID-19 cases. But while we have 246 for COVID cases, only 131 of that are being used. Not because we lack rooms, but more so because we lack health workers,” Leonardia said.

Leonardia said some of Bacolod City’s health workers are under quarantine after contracting COVID-19 while some have resigned or even taken absences without leave.

“We’ve had those experiences while hiring health workers when we had an initial yes but they changed their minds because they don’t want to endanger their families,” Leonardia said.

“We have that arrangement with Sec. [Charlie] Galvez if the budget coming from Bayanihan 2 is in place, we would like to, we were asking to be given some priority insofar as the distribution of personnel that may be hired by the national government, mabigyan kami ng enough to answer the situation here,” he added.

Some 38 percent of the Department of Health’s (DOH) budget under the proposed Bayanihan 2 or Bayanihan to Recover as One Act is intended for health workers’ deployment.