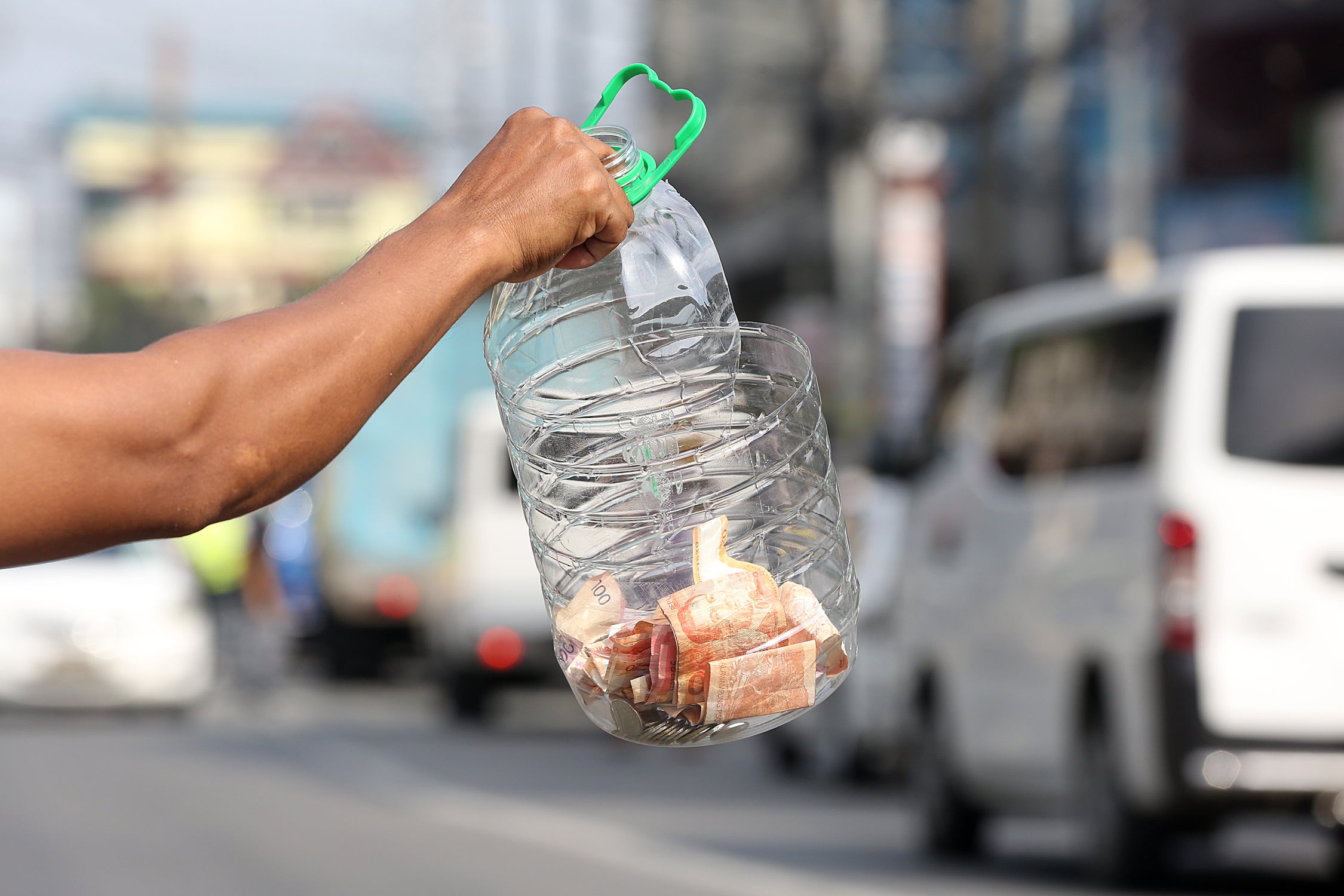 BEGGING FOR AID The prospects for the economy are not bright next year, according to the government, and many jeepney drivers could be forced to continue begging for alms in the streets. The survey by Social Weather Stations says that two in five Filipinos expect the economic situation to worsen over the next 12 months. —NIÑO JESUS ORBETA

MANILA, Philippines — Poverty could worsen next year due to the continuing effects of the COVID-19 pandemic, and the urban rather than the rural areas might bear most of the brunt, acting Socioeconomic Planning Secretary Karl Kendrick Chua said on Thursday.

Chua, who also heads the National Economic and Development Authority (Neda), said that before the pandemic struck, the country was on track to reach its goal of reducing poverty to 14 percent by 2022 from 16.7 percent in 2018.

He told senators during a Senate hearing on the proposed national budget that the government estimated poverty incidence next year could either decline to 15.5 percent or rise to 17.5 percent.

“We don’t see any of the rural poverty worsening,” he said. “We might see a temporary worsening in the urban poverty where the pandemic and the COVID and the quarantine have affected their livelihood at the time being.”

But Sen. Sherwin Gatchalian, citing studies by the Philippine Institute of Development Studies (PIDS) and Social Weather Stations (SWS), said he believed poverty would worsen in 2021 and questioned the lower budget for the Department of Social Welfare and Development (DSWD).

He said the DSWD should continue its unconditional cash transfer (UCT) program, which had provided P300 per month for a poor household. The cash program ends this year.

Under the Tax Reform for Acceleration and Inclusion (TRAIN) Act, UCT is the tax subsidy offered to help 10 million poor families affected by the adjustments in excise tax of petroleum products.

The prospect of worsening poverty was reflected in the results of the latest SWS survey released on Thursday, which showed that a large number of Filipinos shared Gatchalian’s assessment.

The survey said 40 percent of adult Filipinos said they expected the economy to worsen in the next 12 months amid the pandemic.

The percentage of “economic pessimists” or those who expect the economy to worsen was the highest in over 12 years since the 52 percent recorded in 2008, SWS reported.

The survey found that 30 percent of Filipinos are “economic optimists,” or expect the economy to improve, the lowest since the 27 percent in March 2015. It said 24 percent believe the economic situation will remain the same.

Net economic optimism (optimists minus pessimists) fell in all areas, with the biggest decline in the Visayas—from a “very high” +33 in December 2019 to “extremely low” -30 in July.

The July 3-6 poll used mobile phone and computer-assisted telephone interviews of 1,555 Filipinos 18 years old and above nationwide. It had a sampling margin of error of plus-or-minus 2 percentage points for national percentages.

Gatchalian, one of the vice chairs of the finance committee, said the DSWD should continue its unconditional cash transfer program for poor Filipinos in 2021.

He noted that the cash aid, which mitigated the effects of the tax reform measures under the TRAIN law, was removed from the 2021 budget as it would end this year.

“Hopefully, we can do better as the economy recovers faster,” he added.

Gatchalian said the PIDS and SWS studies indicated rising poverty and hunger, the more reason for the DSWD to continue aiding the poorest Filipinos.

“We all know that the DSWD is the vehicle that we use to fight poverty and hunger,” he said.

He said that despite the likely worsening poverty, the DSWD budget was cut by 53 percent—from P366 billion this year to P172 billion in 2021.

Budget Secretary Wendel Avisado explained that the DSWD’s original 2020 budget was P164 billion, and this only went up to P366 bilion because of the additional funds it received for the emergency cash subsidy for poor households when the pandemic broke out.

“There would be no more SAP (social amelioration program) next year. But the regular programs … all the other social services program of the DSWD would be in its budget next year,” Avisado said.

Regarding the unconditional cash transfer, Avisado said Congress could review and adjust the DSWD budget if needed.

Gatchalian said he would ask Finance Secretary Carlos Dominguez III, the head of the administration’s economic managers, to retain the unconditional cash transfer program because of the expected increase in the poverty rate. “This is a good way of helping out constituents at least to keep up and cope with COVID,” he said.

Reacting to the latest SWS survey, presidential spokesperson Harry Roque said the country had “hit rock-bottom and the only way to go is up.”

“So let us link arms, let us resume our livelihoods and reopen the economy. COVID-19 is still here, but we can take care of ourselves and we will recover from this together,” Roque said.

He maintained that “the worst hit us” during the enhanced community quarantine from March to May that shuttered the economy.

“Now, we are gradually reopening the economy and we are also preparing for those who might get sick. Because we have resumed our livelihood, I think we are on the way to recovery. It will not be as bad, it can only be better,” he said. —WITH REPORTS FROM JULIE M. AURELIO AND INQUIRER RESEARCH