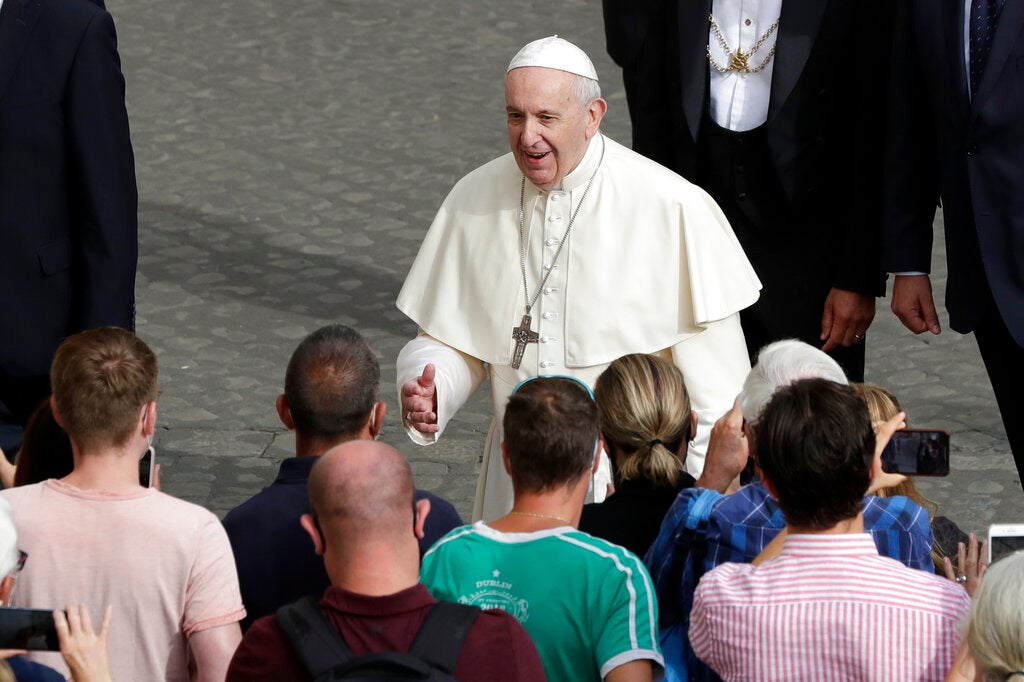 Pope Francis arrives for his general audience, the first with faithful since February when the coronavirus outbreak broke out, in the San Damaso courtyard, at the Vatican, Wednesday, Sept. 2, 2020. (AP Photo/Andrew Medichini)

The pleasures of a well-cooked meal or loving sexual intercourse are “divine” and have unjustly fallen victim to “overzealousness” on the part of the Church in the past, Pope Francis says in a book of interviews published Wednesday.

“Pleasure arrives directly from God, it is neither Catholic, nor Christian, nor anything else, it is simply divine,” Francis told Italian writer and gourmet Carlo Petrini.

“The Church has condemned inhuman, brutish, vulgar pleasure, but has on the other hand always accepted human, simple, moral pleasure,” he added.

Francis — born Jorge Bergoglio in Argentina — said that there was no place for an “overzealous morality” that denies pleasure, something he admitted existed in the Church in the past but insisted is “a wrong interpretation of the Christian message”.

“The pleasure of eating is there to keep you healthy by eating, just like sexual pleasure is there to make love more beautiful and guarantee the perpetuation of the species,” the pope said.

Opposing views “have caused enormous harm, which can still be felt strongly today in some cases,” he added.

“The pleasure of eating and sexual pleasure come from God.”

Francis, the spiritual leader of 1.3 billion Catholics around the world, singled out a 1987 Danish film called “Babette’s Feast” as reflecting his message on pleasure.

Set in the 19th Century, it tells the story of a lottery-winning chef who invites a group of ultra-puritan Protestant worshippers to a sumptuous banquet.

The film is “a hymn to Christian charity, to love,” the pope said.

Wednesday’s book, “TerraFutura, conversations with Pope Francis on integral ecology” was written by Petrini, the founder of the global “slow food” movement created in the 1980s in opposition to “fast food”.

The interviews focus on the pope’s vision of environmentalism with a social face, outlined in his 2015 encyclical “Laudato Si”.