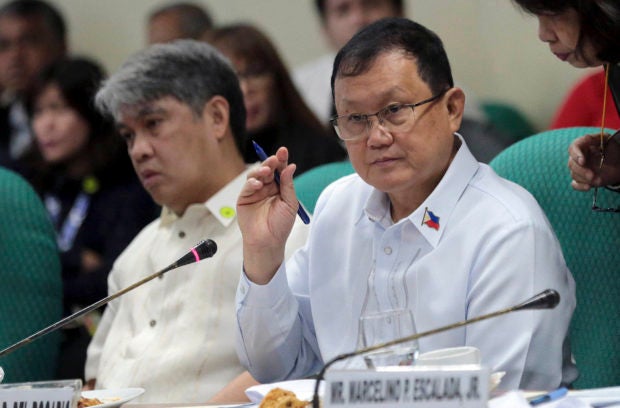 Secretary Eduardo Del Rosario gestures during a meeting with the Senate Committee on Urban Planning, Housing and Resettlement at the Senate in a file photo taken on August 5, 2019.
INQUIRER FILE PHOTO / GRIG C. MONTEGRANDE

MANILA, Philippines — The 94.83-percent budget cut from the proposed budget of the Department of Human Settlements and Urban Development (DHSUD) for 2021 would adversely affect its programs for COVID-19 response and other projects, its secretary said Thursday.

During a House budget hearing, DHSUD Secretary Eduardo del Rosario noted that the Department of Budget and Management had only recommended a budget of P3.68 billion for the agency, or a measly 5.17 percent of the P77-billion budget proposed by DHSUD for next year.

“If we will compute this based on the total budget, it’s only 0.08 percent of the total national budget,” he told the House Committee on Appropriations.

Due to the budget cut, the DHSUD has removed other projects that “will not require prioritization” for 2021, according to Del Rosario.

“The following programs will be adversely affected by this budget cut: full operationalization of the department’s central and 16 regional offices, establishment of housing one-stop processing centers, support to policy formulation and technical assistance, human settlements and urban development program, motor vehicle replacement and acquisition program, and of course our COVID-19 response,” he added.

According to a presentation from DHSUD that was submitted to the House panel, among the COVID-19 response being implemented by the department are the provision of a three-month moratorium on loan payments, allocation of a P10-billion housing finance construction loan for developers by the Pag-ibig Fund, and reduction in the housing interest rate for end-user financing by Pag-ibig Fund, among others.

Cagayan de Oro 2nd District Rep. Rufus Rodriguez, who asked Del Rosario about the proposed budget of DHSUD during the hearing, criticized this significant slash in the proposed funding for the department.

“What a disgusting response of our national government to the needs of our housing sector through the Department of Housing! Can you imagine that? P77 billion is requested because that is really needed for our housing development so we can give dignity as required by our Constitution to give each Filipino human dignity,” said Rodriguez.

“How can the Filipino have human dignity if he has no small piece of land and a shelter?” he added, further asking how the recommended P3.68 billion budget for the agency will be distributed for regional projects.

Rodriguez then urged his fellow lawmakers to “join hands” and “correct” the budget for DHSUD.

He also pointed out that housing has also been left behind whenever budget is being discussed “and that is really the sorry state of the budgeting system of our country.”

Other lawmakers also voiced support for an increase in the budget of the DHSUD during the hearing.

The DBM is recommending a budget of P4.506 trillion under the National Expenditure Program for 2021 that was submitted to Congress.