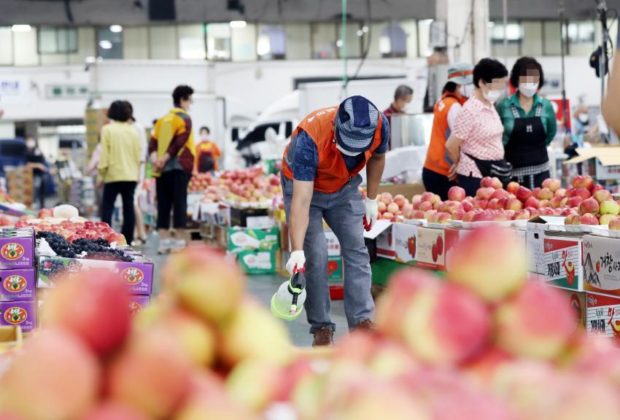 SEOUL — Despite the weekslong social distancing campaign, South Korea is not seeing a sharp drop in COVID-19 infections as sporadic clusters of infections continue to be detected and the virus spreads silently through people with no symptoms or only mild symptoms, health authorities said Wednesday.

Korea reported 156 new COVID-19 cases Wednesday — 144 locally transmitted and 12 imported — bringing the total caseload to 21,588, according to the Korea Centers for Disease Control and Prevention.

“We are expecting the number of infections to decrease to the double-digit range, but it is not dramatically falling,” Jung Eun-kyeong, the KCDC’s chief, said at a briefing Wednesday.

“In February and March, the government did not systematically implement social distancing rules, but we had heightened fears about COVID-19 so we practiced social distancing a lot more intensively,” she said, referring to the country’s massive outbreaks linked to a minor religious sect in Daegu in spring. As the source of infection was clear, the virus was quickly brought under control from the peak of 909 cases on Feb. 29 to 131 on March 10 with extensive COVID-19 testing and contact tracing.

It was the seventh consecutive day that the country’s daily count of new coronavirus cases stayed below 200 since the resurgence of COVID-19 triggered by a Seoul-based church and a massive rally Aug. 15. Since reaching a second peak of 441 on Aug. 27, the daily tally has gradually declined, but slowly. Korea has posted triple-digit rises for the 27th day since Aug. 14.

Authorities are on alert over the silent spread of the virus by people with no symptoms. They are also concerned about untraceable cases and new small-scale outbreaks.

For the past two weeks, an estimated 30 to 40 percent of people testing positive for the new coronavirus had no symptoms at the time they were diagnosed, Jung said. Despite showing no symptoms, they were detected in the process of contact tracing by the authorities.

Transmission routes were unidentified for 22.2 percent of new cases reported from Aug. 27-Sept. 9, according to the KCDC.

Sohn Young-rae, a senior Health Ministry official, asked for compliance with the stricter social distancing campaign in the Seoul area for five more days. If the coronavirus gets clearly under control this week, there will be no need to extend it further, he added.

A decision on whether to end or extend the current level of social distancing is expected at the end of this week.

“Level 2.5” social distancing rules are in place until Sept. 13 in the Greater Seoul area, which includes Incheon and Gyeonggi Province. Combined, the area is home to nearly half of the country’s population. Level 2 guidelines are in place nationwide until Sept. 20.

Of Wednesday’s locally transmitted cases, the vast majority were still registered in the Seoul metropolitan area — 48 in Seoul, one in neighboring Incheon and 51 in Gyeonggi Province, which surrounds the capital.

Of the 12 imported cases, eight were identified while the individuals were under mandatory self-quarantine in Korea, with the other four detected during the quarantine screening process at the border. Seven came from Asia, three from the Americas and one each from Europe and Africa. Ten of those newly diagnosed were foreign nationals.

The number of COVID-19 patients in serious or critical condition was 154 as of midnight Wednesday, with 86.4 percent being in their 60s or over. For the past two weeks, 36.2 percent of the confirmed patients were 60 or older.

Two more people died of the coronavirus, bringing the death toll to 344. The overall fatality rate came to 1.59 percent.

So far, 17,023 people, or 78.86 percent, have been released from quarantine upon making full recoveries, up 387 from a day earlier. Some 4,221 people are receiving medical treatment under quarantine.