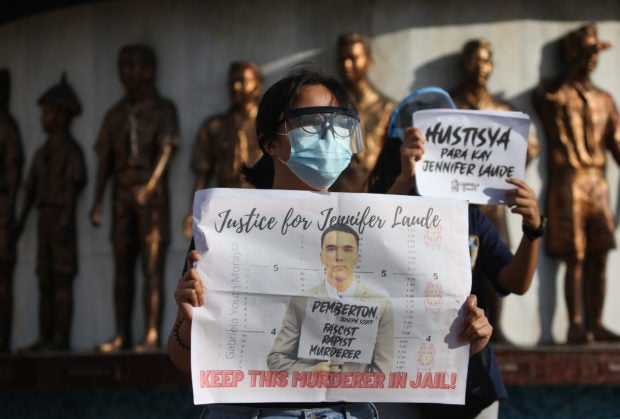 Protest by LGBTQ+ organization Bahaghari and Gabriela against President Rodrigo Duterte’s granting of absolute pardon to Lance Cpl. Joseph Scott Pemberton held at the Boy Scout Cirle in Quezon City. The US Marine soldier was convicted of homicide for the killing of transgender woman Jennifer Laude in 2014 in Olongapo City. INQUIRER PHOTO/LYN RILLON

MANILA, Philippines — In a series of tweets on Wednesday, Foreign Secretary Teodoro Locsin Jr. expressed sympathy for former US Marine Joseph Scott Pemberton and defended President Rodrigo Duterte’s decision to grant the American absolute pardon, saying it was the right and fair thing to do.

The pardon showed who are the real friends and enemies of the United States in the Philippines, Locsin said.

The country’s top diplomat said Pemberton “wasn’t powerful” and had been abandoned by his own government, even though the former Marine lance corporal remained in US custody while serving his 10-year sentence for killing Filipino transgender Jennifer Laude in October 2014.

“Everyone had ditched him and I mean everyone,” Locsin said in one post on his Twitter account. “No one even asked about him from his side … He’ll go home to no welcome, except possibly among his poor own. The reality of an uneven society.”

He was reacting to an Inquirer report quoting Vice President Leni Robredo calling the pardon “one of the numerous instances where the government favors the powerful.”

Robredo had questioned whether Duterte’s decision was fair and just in view of the thousands of Filipinos languishing in jail for much lighter offenses but not getting similar attention from the President.

Locsin retweeted another report which quoted Sen. Christopher “Bong” Go, Duterte’s longtime aide as saying no one could question the President’s judgment.

“There you go. Only rabid anti-Americans see wrong in an act of right and fairness. Now America knows who are its friends and who are its implacable enemies in the Philippines,” the foreign secretary said.

Transgender and human rights groups and opposition leaders denounced the pardon as an affront to Philippine sovereignty and the Duterte administration’s subservience to the United States.

It was Locsin who first disclosed on Monday that the President had decided to grant pardon to Pemberton. Duterte later said the country “did not treat him [Pemberton] fairly” and that his “good character” should be presumed and credited.

Pemberton’s lawyers had argued that he had more than fully served the sentence if his good conduct were accounted for. The Olongapo City Regional Trial Court (RTC) which convicted him in November 2015 agreed and ordered Pemberton’s release.

In another tweet, Locsin indicated that Duterte was initially against the RTC ruling.

Locsin said the President “merely chose to withdraw his objection to the court’s presumption favoring the accused.”

“He’ll take heat for a government decision, e.g., to let the prisoner go for time served on the observation and presumption of good behavior in detention,” he added.

In a television interview on Wednesday, Justice Secretary Menardo Guevarra said he was “a bit taken aback” and surprised when the President informed him on Monday about the pardon as the DOJ earlier that day filed a motion for reconsideration of the RTC’s order to release Pemberton.

“I found it kind of awkward for me to question his personal judgment after hearing what he said, which I did not find to be objectionable anyway,” Guevarra said.

Bureau of Immigration (BI) chief Jaime Morente said he had asked Bureau of Corrections (BuCor) Director Gerald Bantag to turn Pemberton over to immigration authorities after his release from prison so that his deportation immediate departure from the country could be arranged.

A summary deportation order was issued on Sept. 16, 2015, by the bureau’s board of commissioners against Pemberton for being an “undesirable alien.”

Rowena Garcia-Flores, a lawyer for the American, said the American had been drafting a letter of apology which he planned to give to the Laude family before his departure.“He is still composing [the letter]. I don’t know what he will say,” Flores said in a text message to the Inquirer.

She said Pemberton would not undergo court-martial or any legal processes in the United States.

Suarez earlier lamented that Pemberton had not apologized to the family while he was in detention. The apology “would have simply shown his good manners and right conduct,” she had said.

Pardoning Pemberton was an “injustice not only to Jennifer and her family but a grave injustice to the Filipino people,” Suarez said.

—With reports from Tina G. Santos and Joanna Rose Aglibot