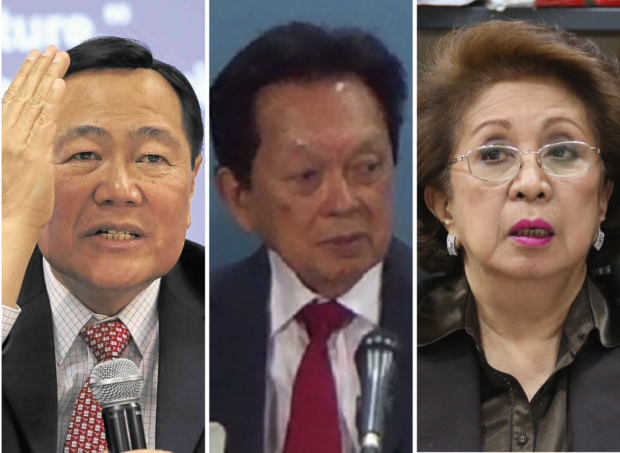 MANILA, Philippines — “Come to the battlefield on open terms and on equal footing as the rest of the parties.”

With these words, former Supreme Court Justices Antonio Carpio and Conchita Carpio-Morales presented a challenge to former solicitor-general Estelito Mendoza, who requested participation in the upcoming oral argument on petitions against the Anti-Terrorism Act of 2020 but only as an “amicus curiea” or friend of the court.

Under the rules, a “friend of the court” is invited by the court to shed light on the issues related to the subject of the debate and guide the court on how to decide on the matter.

But in a manifestation and opposition by the group led by the two former high court magistrates, they told the Supreme Court that Mendoza is misleading the court when he offered himself as “friend of the court” when he is actually seeking for the outright dismissal of the more than 30 petitions against the controversial anti-terrorism law.

In the case of Mendoza who is taking the stand of the government, they said that if he wants to participate in the oral arguments, he should intervene in the case.

“Atty. Mendoza is approaching ‘not as a friend of court’ but as a ‘friend of the respondents’. If he desires glory, he should come to the battlefield on open terms, and on equal footing as the rest of the parties,” they said.

Qualification-wise, they said Mendoza’s experience during the martial law years where he defended the arrests and detentions conducted by the authorities as the then solicitor general does not qualify him to become an amicus curiae in the current petitions.

In fact, they said, the former solicitor-general, even with his litigation and academic experiences, does not make him qualified to be a “friend of the court” citing Rule 138 Section 36 of the Rules of Court, which, among others, require that one must be impartial.

In Mendoza’s case, he already stated his position and that is for the dismissal of the petitions against the Anti-Terrorism Act of 2020, they stressed.

The former Senior Associate Justice and former Ombudsman added that “there is nothing wrong with being in parity with other litigants if one seeks to advance a cause” given that some parties calling for the nullification of the anti-terror law have “considerable stature and qualifications equal to if not greater than that of Atty. Mendoza.”

They further stressed that the high court has never allowed someone to invite himself or herself as an amicus curiae.

“Thus, beyond the procedural inequalities it will create, even on a matter of substance, his desired participation does not inspire confidence as to the level of assistance he may potentially offer as amicus curiae to the Honorable Court. Accordingly, his petition for leave ought to be denied and accompanying comment ignored,” they added.

Joining Carpio and Morales in their original petition against the anti-terrorism law are UP Associate Dean and Institute for Maritime Affairs and Law of the Sea Director Jay Batongbacal, former Supreme Court PIO chief and now UP Law professor Theodore Te, and lawyers Victoria Loanzon and Anthony Charlemagne Yu.

The Free Legal Assistance Group (FLAG) also filed a similar opposition to Mendoza’s bid calling it “frivolous and dilatory,” and “disruptive to the orderly administration of justice.”

According to FLAG, Mendoza’s experience as solicitor-general during the time of martial law era is not the kind of experience that the high court is looking for in a “friend of the court.”

Mendoza, in his petition filed last month, said the petitions against the Anti-Terrorism Act of 2020 were filed prematurely and should be dismissed for lack of “actual controversy involving a legally demandable and enforceable right.”

He explained that penal law like the controversial measure may not exist without the commission of any act and that the petitioners have failed to prove that any act they have questioned and challenged is committed by the respondents.

With this, he stressed there can be “no actual controversy involving rights which are legally demandable and enforceable.”

Likewise, he said the petitions do not sufficiently allege that the petitioners have committed any act in violation of the anti-terror law to create again an actual controversy for the exercise of judicial power.

Mendoza specifically referred to the petitions filed by the Carpio group and that of lawyer Howard Calleja, who was the first group that challenged the constitutionality of the anti-terrorism law before the Supreme Court.

The anti-terrorism law is to date the most contentious law in the country’s history with more than 30 petitions questioning its constitutional basis.