Pope sports a face mask for the first time in public 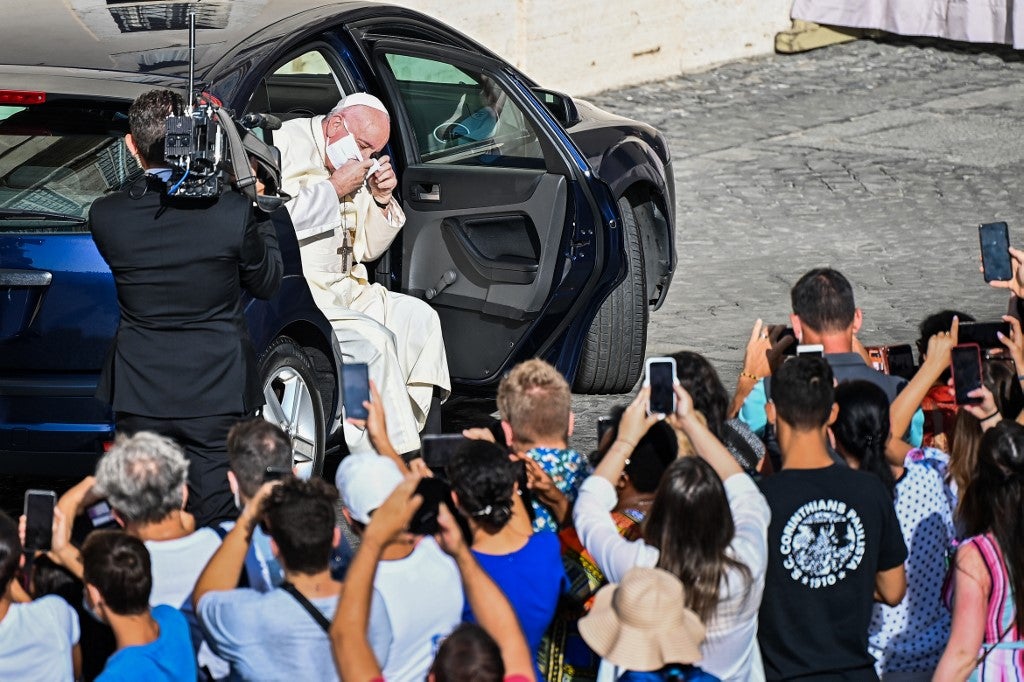 Pope Francis takes off his face mask as he arrives by car to hold a limited public audience at the San Damaso courtyard in The Vatican on September 9, 2020 during the COVID-19 infection, caused by the novel coronavirus. (Photo by Vincenzo PINTO / AFP)

Pope Francis was seen Wednesday for the first time wearing a protective face mask as he attended his second traditional general audience before a limited public presence after a six-month suspension.

The pontiff — known for a fondness for close personal contact — however quickly removed the mask as he emerged from the car carrying him to the audience, which was suspended in February over the coronavirus pandemic.

But he shunned his usual practice of shaking hands and kissing babies as some 500 faithful filled a courtyard at the Apostolic Palace inside the Vatican.

At his second meeting since suspending general audiences on February 26, the crowd thronged behind a barrier and some even lowered their masks to greet the leader of the Roman Catholic Church.

The pope shook hands with prelates attending the audience and, smiling, then turned to the crowd, urging them not to shake hands and to return to their seats in order to “avoid contagion.”

Francis focused on the socio-economic impact of the pandemic which he said was “without barriers.

He advocated a society in which people should have more solidarity with their neighbors.

Pope Francis, whose birth name is Jorge Bergoglio, has shown little fear for his health since the outbreak of the coronavirus pandemic early this year.

Before Wednesday he had never appeared with a mask and had continued to receive visitors within the Apostolic Palace — albeit fewer groups than before.

Last Thursday he shook hands with a group of French actors committed to defending the environment. The group was exempted from wearing face masks and included the actress Juliette Binoche.

The 83-year-old pontiff found it difficult to wear a mask that restricted his breathing, a member of his entourage said Wednesday.

When he was 21 Jorge Bergoglio suffered from acute pleurisy and surgeons removed part of his right lung, according to his biographer Austen Ivereigh.

This forced him to give up his dream of becoming a Jesuit missionary in Japan and he also had to give up playing football.