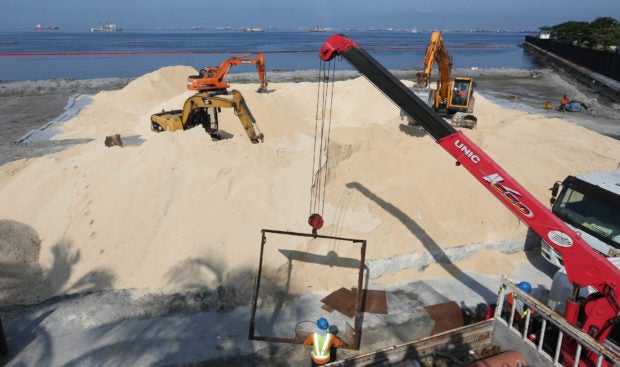 FILE – In this Sept. 6, 2020 photo, workers continue to pour white sand composed of crushed dolomite over the 500 meter stretch of Manila Bay as part of the DENR’s Manila Bay Rehabilitation Project aimed at discouraging people from littering in the ocean that has now drawn ire from advocates. INQUIRER/ MARIANNE BERMUDEZ

MANILA, Philippines — The Makabayan bloc in the House of Representatives is seeking an investigation into the government’s rehabilitation of Manila Bay to include the dumping of crushed dolomite, which the Department of Health (DOH) had previously warned of its possible public health hazard.

The Makabayan bloc filed House Resolution No. 1194 on Tuesday—the same day the Department of Environment and Natural Resources (DENR) faced the lower chamber for the deliberations for its proposed 2021 budget.

The lawmakers cited several groups and members of the academe who have expressed concerns over the said project such as the Pambansang Lakas ng Kilusang Mamamalakaya ng Pilipinas (Pamalakaya) which branded the project as “artificial rehabilitation focusing on aesthetic appearance rather than addressing the environmental degradation problems” of Manila Bay.

They also cited environmental groups such as the Kalikasan People’s Network for the Environment which said that “land reclamation activity might endanger marine wildlife and affect the coastline communities situated around and nearby the area.”

Marine conservation advocacy group Oceana, as cited by the lawmakers in the resolution, pointed out that the material being dumped along Manila Bay does not seem to have come from the area and that putting it there “may not just be destroying the natural ecosystem in Manila Bay but also of the source of this white sand.”

Also questioned were the health hazards of the project particularly on the use of dolomite sand, which comes from crushed dolomite from Cebu and dumped in Manila Bay to transform it into a white-sand beach.

To recall, no less than the DOH said that dolomite dust can cause respiratory illnesses when inhaled or irritation if it enters the eyes of a person.

(If this is ingested, it can have discomfort in a person’s gastrointestinal system it will cause pain and diarrhea.)

But during the budget deliberations on Tuesday, Environment Secretary Roy Cimatu defended the project and insisted on the safety of dolomite—even responding on the affirmative when asked if he can categorically state that dolomite is safe.

“What is hazardous is the fine silica quads in some dolomite in the form of dust that is generated during crushing and screening,” he added.

According to Cimatu, the dust particles are only 10 to 15 microns and are hazardous if inhaled for long periods of exposure without personal protective equipment.

However, the size of the dolomite sand being used in Manila Bay is two to five millimeters or equivalent to 2,000 to 5,000 microns or 100 times bigger than dust, said Cimatu.

“Therefore, [they are] not suspended in air and it cannot be inhaled,” he added.

Aside from the health hazards of the project, the Makabayan bloc also raised questions over the use of funds for the project.