Duque close to tears, on verge of quitting amid PhilHealth controversy – Go 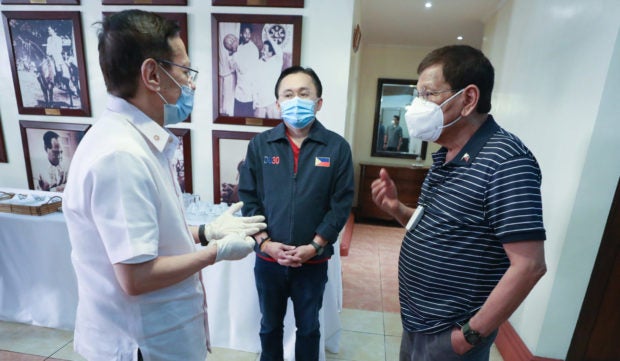 In this photo taken on May 25, 2020, President Rodrigo Roa Duterte discusses matters with Health Secretary Francisco Duque III, as Senator Bong Go (center) watches, on the sidelines of the meeting with members of the Inter-Agency Task Force on the Emerging Infectious Diseases (IATF-EID) at the Malago Clubhouse in Malacañang. ACE MORANDANTE/PRESIDENTIAL PHOTO

MANILA, Philippines — Health Secretary Francisco Duque III was nearly in tears and close to stepping down from his post as he continued to be linked to alleged corruption in Philippine Health Insurance Corp. (PhilHealth), Sen. Christopher “Bong” Go disclosed Tuesday.

“Health Secretary Duque still has the trust and confidence of the President and we must respect that,” Go said in a statement.

READ: Duterte tells Duque: ‘This is not the time for you to resign’

“In truth, Secretary Duque is close to tears and would really want to let go,” Go said.

The senator also defended the Department of Health (DOH) in its handling of the COVID-19 pandemic, saying the agency has been doing its best to perform its duty during the pandemic.

Go, a long-time supporter of Duterte, is often seen among members of the government’s COVID-19 task force that includes Duque. He has often been part of televised briefings of the President though already a member of the legislative branch.

Duque has repeatedly earned the ire of senators over his handling of the pandemic. Fourteen senators earlier signed a resolution calling on him to immediately resign because of this.

Recently, several lawmakers also called out Duque for not being able to address the alleged rampant corruption in PhilHealth, which he has led in different capacities since 2001.

As the current DOH chief, Duque sits as ex-officio chairman of the PhilHealth board.

The Senate Committee of the Whole, which conducted an investigation into the PhilHealth mess, even recommended the filing of criminal charges against Duque and several others over the allegedly questionable release of billions of funds under the state-run firm’s emergency cash advance measure.

The health chief, who vowed to clear his name, has since dismissed the committee’s report as “baseless findings” made on “mere allegations alone.”

Aside from recommending criminal charges, the Senate panel also called on Duterte to replace Duque and appoint a new health secretary with a “stronger will to fight corruption.”

While Go agreed with most of the recommendations in the Senate panel report, he said that he would leave it to the President to decide – because he the sole appointing authority – if there is a need to revamp his Cabinet.

“As I have explained in the Senate Session last week, this is my only reservation upon signing the Committee Report,” Go said.

The senator also noted that a task force led by the Department of Justice (DOJ) was already wrapping up its probe on PhilHealth.

“If it could be proved that there’s corruption, then there’s nothing else to talk about. He has to go. And anyone else involved in corruption has to go, be held responsible, and be imprisoned,” Go said.

Further, Go said the findings and recommendations contained in the report of the Senate committee would help the DOJ task force “to accomplish its task to investigate, audit, conduct lifestyle checks, recommend suspensions or dismissals, prosecute and file charges, and put in jail those who are found guilty of corruption.”