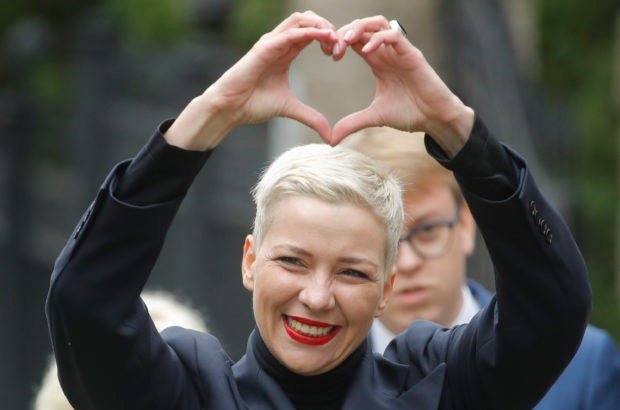 In this Thursday, Aug. 27, 2020 file photo, Maria Kolesnikova, one of Belarus’ opposition leaders, gestures on the way to the Belarusian Investigative Committee in Minsk, Belarus. Maria Kolesnikova, a leading opposition activist, and several other members of an opposition council in Belarus went missing Monday and their colleagues feared they were detained as part of the authorities’ efforts to squelch nearly a month of protests against the re-election of the country’s authoritarian leader. (AP Photo/Dmitri Lovetsky, File)

KYIV, Ukraine — A leading opposition activist in Belarus was held on the border Tuesday after she resisted authorities’ attempt to force her to leave the country.

Maria Kolesnikova, a member of the Coordination Council created by the opposition to facilitate talks with longtime leader President Alexander Lukashenko on a transition of power, was detained Monday in the capital, Minsk, along with two other council members.

Early Tuesday, they were driven to the Ukrainian border, where the authorities told them to cross into Ukraine. Kolesnikova refused and remained on the Belarusian side of the border in the custody of the Belarusian authorities.

The authorities have applied similar tactics to other opposition figures, seeking to end a month of demonstrations against the re-election of Lukashenko in a vote the protesters see as rigged,
Sviatlana Tsikhanouskaya, the main opposition challenger to Lukashenko, left for Lithuania a day after the Aug. 9 vote, under pressure from the authorities.

On Saturday, a top associate of Tsikhanouskaya, Olga Kovalkova, moved to Poland after the authorities threatened to keep her in jail for a long time if she refused to leave the country.

Belarusian prosecutors have opened a criminal probe against members of the Coordination Council that opposition activists set up after the election to try to negotiate a transition of power. Several council members were arrested and some others called for questioning.

Last week, Kolesnikova announced the creation of a new party, Together. She said the move will help overcome the current crisis, but the party founders’ call for constitutional changes has stunned some other opposition council members, who argued that it could divert attention from the main goal of getting Lukashenko to step down.