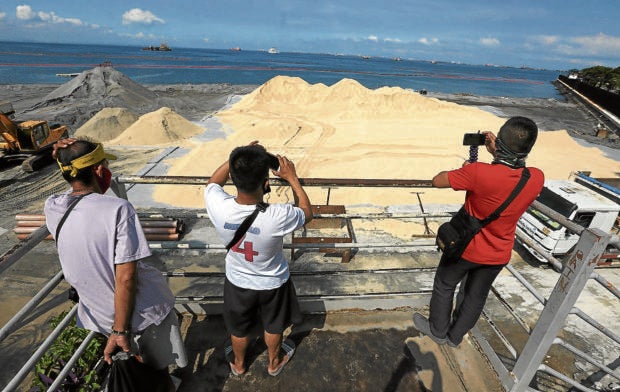 MANILA, Philippines — An environmental group on Monday urged the Department of Environment and Natural Resources (DENR) and the Department of Public Works and Highways (DPWH) to fully disclose the studies and results of consultations they had carried out before proceeding to develop an artificial white sand beach on the rocky shore of Manila Bay.

In a statement, EcoWaste Coalition said the DENR and the DPWH should make public all information on the steps they had taken that led to the government’s decision to spend P389 million in taxpayer money to build the artificial beach.

Pending the disclosure, the group said, the two departments should stop developing the project, given evidence showing that dolomite — a type of calcium magnesium carbonate mineral pulverized to make the artificial white sand — can cause respiratory illnesses and is categorized as a potential carcinogen.

“As the public has the right to know, we urge the DENR and the DPWH to post on their websites all pertinent documents that will provide environmental, health, legal and financial justification for pursuing this beautification project,” said Aileen Lucero, the coalition’s national coordinator.

In particular, Lucero said the two agencies must show they “have considered potential harm to the marine and coastal ecosystems and to human health, and how much [taxpayer] money will be required for the continuing monitoring, maintenance and replenishment of the ‘white sand’ beach, which could be used for truly rehabilitating Manila Bay and for supporting the poor who depend on it for their livelihood.”

Two US contractors have warned about the danger of dolomite to public health.

In a 2012 safety data sheet, Texas distributor and builder Lehigh Hanson Inc. warned that dolomite could cause skin and eye irritation, as well as cancer and damage to the lungs through prolonged or repeated exposure.

Lhoist North America, in its 2018 safety data sheet, warned that dolomite contains crystalline silica, classified as a potential carcinogen when inhaled by humans.

“Inhalation of silica can also cause a chronic lung disorder, silicosis,” Lhoist said.

Maritime affairs expert and University of the Philippines law professor Jay Batongbacal said on Sunday that the warnings from the two US companies could be ground for filing a petition for a writ of kalikasan, a legal remedy to halt projects potentially damaging to the environment.

But the Department of Health (DOH) on Monday defended the DENR, saying the agency would not have pushed through with the project if it knew this would harm the environment and the people.

Health Undersecretary Maria Rosario Vergeire acknowledged the safety warnings, but said people would not immediately suffer from these “minor” health effects just by going to the 500-meter stretch of Manila Bay’s shore being covered with pulverized dolomite.

Since the DENR greenlighted the project, Vergeire said, the DOH believed the agency did due diligence before proceeding with it.

“The DENR wouldn’t have implemented this if they did not study that this will cause harm to the environment and to our people,” Vergeire said.

On Sunday, Vice President Leni Robredo slammed the project as “insensitive” and “insulting,” as P389 million was being poured into it when that money could have been spent to help thousands of poor families who had lost their livelihood due coronavirus lockdowns.

The Archdiocese of Manila added its voice to the opposition to the project on Monday, saying the project was “unresponsive to the needs of the poor.”

“These days, many people are jobless. They do not have food. Now [the government is] spending over P300 million for white sand,” said Bishop Broderick Pabillo, apostolic administrator of the archdiocese. “If [the] DENR has money, that should go to purchase of food and [provision of] employment [to] people.”

Malacañang, however, continued to defend the project, saying the P389 million was part of the DENR’s 2020 budget.

“[I]t is part of an overall adaptation policy of the DENR,” he added.

—With reports from Jovic Yee, Jodee A. Agoncillo and Julie M. Aurelio