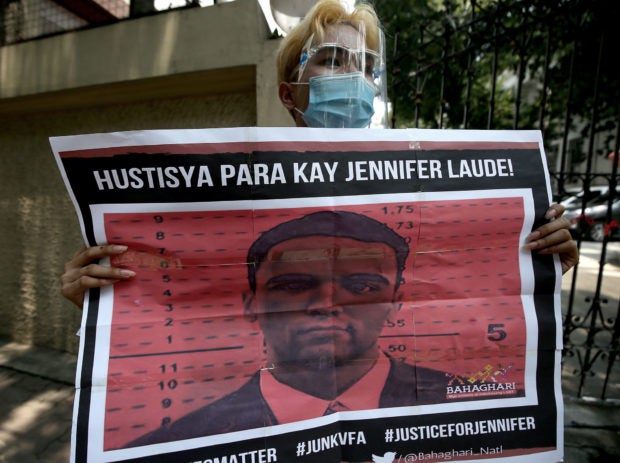 FILE- Members of the LGBTQ rights group Bahaghari expressed their opposition to the
early release of former US Marine Joseph Scott Pemberton and demand justice for transgender Jennifer Laude, whom he choked to death in Olongapo City in 2014. Pemberton was sentenced in
2015 to 10 years in prison for the homicide. —RICHARD A. REYES

MANILA, Philippines — President Rodrigo Duterte’s decision to grant absolute pardon to US Marine Lance Corporal Joseph Scott Pemberton drew mixed reactions from senators, with one lawmaker thanking him for settling the issue while another branded it as a diversionary tactic.

“This questionable and highly controversial pardon helps to redirect and divert the public’s attention away from the incompetent, corrupt and failing [COVID-19] campaign,” Senator Francis Pangilinan said in a message to reporters.

Meanwhile, Senator Imee Marcos surmised that the President’s decision to pardon Pemberton was to “prevent any future discordant issues that opposition politicians would try to exploit.”

“The President has laid the issue to rest and we thank him for it,” she said in a separate message.

Further, she said that it shows that the relations between Manila and Washington “are very deep and very cordial.”

“Mr. Pemberton came to our country as part of the traditional friendly military exercises, the Balikatan, between our 2 countries. It was very unfortunate that this had to happen,” Marcos said.

“However, the Philippines took jurisdiction over the case as mandated by the VFA (Visiting Forces Agreement). Justice has been served with the Philippine judicial system functioning in accordance with its constitutional duties,” she added.

Pemberton was convicted of killing transgender woman Jennifer Laude in 2014 but the Olongapo Regional Trial Court (RTC) recently released an order allowing the release of the American soldier.

According to the Olongapo court’s order, Pemberton was said to have already served the 10-year maximum of his penalty after taking into account the good conduct time allowances he accumulated while detained.

In a statement, Hontiveros said this move by the President was “an unbelievable affront” not only to the LGBTQI+ community but also to the Filipino people.

“While Filipinos who are convicted even of lesser crimes are never accorded such a privilege, an American who brutally killed a Filipina is allowed to walk free by the President himself,” she said.

“This current move also gives the lie to the so-called support of the president for the trans and LGBTQI community,” she added.

Hontiveros said that instead of showing support for the Laude family, Duterte chose to “favor” Pemberton.

However, Senate President Vicente Sotto III and Senator Panfilo Lacson recognized the President’s exercise of power in granting the pardon to Pemberton.

“That settled all debates and discussions on the legality of Pemberton’s GCTA issues. Some people may question the wisdom and reasons behind the grant of absolute pardon by the President until they are black and blue,” Lacson said in a statement.

“Since we cannot question the exercise of that power by the President under the Constitution, it will be a waste of time and effort to further deliberate on the matter,” he added.

Lacson also noted that the US soldier could still visit the Philippines if he opts to do so in the future since “absolute pardon carries with it the extinction of criminal liability and full restoration of Pemberton’s civil rights.”

Sotto, meanwhile, pointed out that the granting of a pardon is “a power granted to the President alone by the 1987 Constitution, Article VII, Section 19.”

“Such Presidential charity is immune from any challenge from any person, institution or other branch of government,” the Senate leader said.

“Any complaint about its exercise is futile. Such a complainant must first seek to amend the Constitution if he so desires. The case is closed. Consummatum Est (It is completed),” he added. [ac]