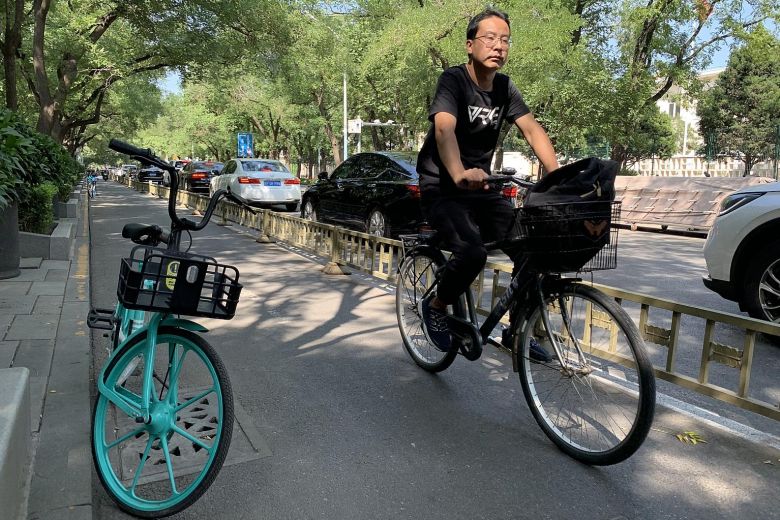 A cyclist in downtown Beijing. Shared bicycle service companies such as Meituan and Hellobike have seen a steady rise in both the frequency and length of trips taken by users. ST PHOTO: DANSON CHEONG

BANGALORE AND NEW DELHI — When Mr Krishnan Hariharasudhan’s employer in Singapore lost its 40-year-long contract with an engine oil manufacturer in April this year, 110 employees, including him, were laid off.

Unlike his colleagues, Mr Hari was lucky to receive a new job offer while in Singapore, but he said his old company refused to transfer his work permit.

On Aug 11, the firm put him on a repatriation flight back home to Chennai in Tamil Nadu, India.

“I didn’t want to go home because the salaries here are a third of what I used to get.

“I would have preferred to stay in Singapore, look for a job, and directly transfer my work permit to a new employer,” said 29-year-old Mr Hari, who had worked as a supervising manager earning about $1,200 a month.

Migrant workers like Mr Hari who have lost jobs are torn between staying back to look for work, or returning to their home country.

Initially fearing deaths and illness under the Covid-19 pandemic, thousands of migrants flew back home.

The High Commission of India in Singapore said “17,000 Indians have been evacuated in 115 flights”, most of them traveling to the cities of Tiruchirappalli, Coimbatore, Madurai and Chennai in Tamil Nadu in the past five months.

But as India and Bangladesh struggle with crashing economies and unprecedented unemployment, most expat workers are reluctant to leave, and those already home are eager to go back abroad.

About 300,000 of 2.5 million Tamils working in different countries have come back to Tamil Nadu in five months.

In Kerala, another major sender of migrants, only 254,000 expats have returned, out of about 500,000 who had originally registered for repatriation.

Mr S. Irudaya Rajan, a migration expert at the Centre for Development Studies and a member of the Kerala task force for expats, said: “We expect more to come home until December, but many who returned in panic of Covid-19 are already regretting it.

“With no great livelihood in their hometowns, returnees are spending their savings. There is a great clamor to go back abroad.”

Jobs are scarce in India; the gross domestic product contracted a record 23.9 per cent between April and June, and at least 19 million have lost salaried formal economy jobs after the lockdown.

Mr Raj S, a 45-year-old construction machine operator who worked in Singapore for 14 years and returned to Tirupattur in Tamil Nadu in July, now says his farm income at home is poor, and debts are mounting.

“I left because I was very afraid I’ll get Covid in the dormitories, but I have to go back somehow,” he said.

He had spent 15 days in quarantine in Singapore before leaving, and seven days after landing in India.

Even with a job, Mr Hari said he will have to pay $150 for a flight, about $300 for paperwork, and at least $200 for Covid-19 swab tests and quarantine when he gets to Singapore.

Returning travelers have to pay for their tests. However, the borders in Singapore remain closed to travelers except for safe travel pass holders from South Korea, Brunei, China, Malaysia and New Zealand.

Many migrants laid off because of the pandemic-associated downturn, and now back home, experience shame and impoverishment.

Some even face discrimination from locals because of the fear that they could be carrying the virus.

Shipyard mechanic Anisur Rahman, who worked in Singapore for eight years, went home to Bangladesh’s Tangail district on Feb 26 on what was meant to be a month-long holiday.

But the pandemic struck and the 42-year-old was not able to fly back.

He waited to rejoin work at his employer’s request, but did not hear from them.

Last month, he found out from the Ministry of Manpower’s website – his employer did not inform him – that his work permit had been cancelled, leaving him without a job.

“I had hoped to return but now I will have to find some work here in my country,” a dejected Mr Rahman said. “I even used up whatever I had saved.”

More than 95,000 Bangladeshi workers have returned home from different countries since April this year after losing their jobs.

One of them is 42-year-old Iqbal Hossain, who worked as a tailor in Kuwait.

His residency permit expired in January but his employer did not apply to renew it.

Mr Hossain then spent several weeks under a strict lockdown and 20 days in a government camp for those without residency permits.

He eventually returned to Bangladesh in May under an amnesty scheme.

“I have been struggling since, surviving on money borrowed from others,” he said, adding that accessing a government financial support scheme aimed at migrants like him has been difficult because of extensive paperwork.

He added that he plans to open a small grocery store.

Many laid-off blue-collar workers say their dues are unpaid.

Ms Marina Sultana, director of programs at the Dhaka-based Refugee and Migratory Movements Research Unit, asked: “Don’t employers have a responsibility for their employees when a crisis erupts? Or do they dump their helpless workers in an even more helpless situation?”

Major migrant-source countries like India and Bangladesh should collectively advocate to better protect their workers’ rights, and also identify potential job markets abroad to train returned migrants accordingly, Ms Sultana said. “An unemployed migrant will not feel secure until he or she has a steady job.”

“A cleaner in Singapore or Dubai will not work as a cleaner in India, that’s a reality,” said Mr Rajan.

He suggested that before returnees who are staying home “burn through their savings and fall in deep financial crisis”, states must encourage them to invest in small businesses that also create employment.