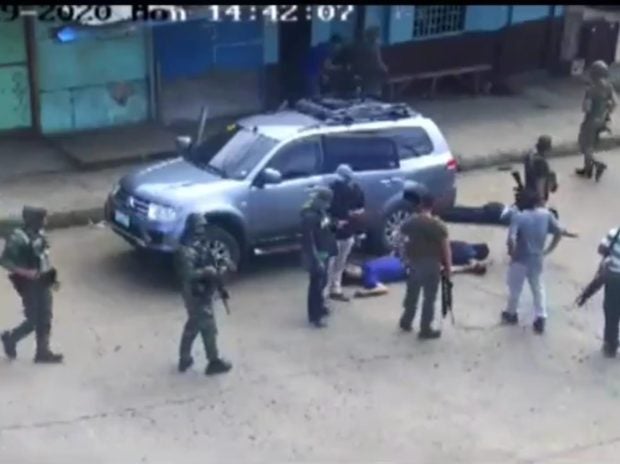 Screengrab of the CCTV footage of the shooting incident in Jolo, Sulu

MANILA, Philippines — The Philippine National Police – Internal Affairs Service (PNP-IAS) has filed administrative complaints against nine police officers and three of their unit commanders in connection with the fatal shooting of four intelligence officers of the Philippine Army in Jolo, Sulu last June.

“The PNP Internal Affairs Service has formally filed admin cases against nine PNP personnel who are respondents in a criminal case for murder and planting of evidence filed by National Bureau of Investigation (NBI)  before the Department of Justice (DOJ)  in connection with the death of the four Philippine Army personnel in Jolo, Sulu last June 29, 2020,” Police Gen. Camilo Cascolan said in his first press briefing as PNP chief on Monday.

The nine officers are currently under restrictive custody at Camp Crame in Quezon City.

“Aside from the six police non-commissioned officers of Jolo Municipal Police Station and the three members of the Provincial Drug Enforcement Unit of the Jolo Provincial Police Office, IAS also filed admin cases against three police commissioned officers who are direct superiors of the nine respondents for gross neglect of duty under the doctrine of command responsibility,” Cascolan also said.

Cascolan said they will also be summoned at Camp Crame.

“I am giving the Internal Affairs Service the freehand in exercising its mandate to determine the administrative liability of these personnel and to impose the appropriate penalty as prescribed under PNP regulations,” he added.

The PNP chief also assured that all personnel tagged in the administrative case will be given due process throughout the course of the investigation.

The four slain Army officers were tracking two suicide bombers when their vehicle was flagged down by the police despite identifying themselves as members of the military.

They were then instructed to proceed to the police station for verification of their identities.

The involved police officers claimed the Army officers later tried to escape and pointed their weapons against them prior to the shooting.

The military, however, refuted this claim, with former Army commander and now Armed Forces chief Gen. Gilbert Gapay branding the incident as murder.