Julian Assange: prolific leaker of secrets back in spotlight 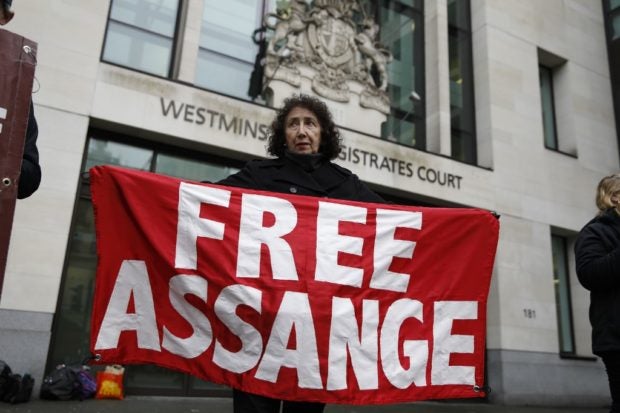 (FILES) In this file photo taken on February 19, 2020 a protester holds a banner in support of Wikileaks founder Julian Assange outside Westminster Magistrates Court in London.  A London hearing resumes on Monday, September 7, to decide if WikiLeaks founder Julian Assange should be extradited to the United States to face trial over the leak of secrets relating to the wars in Afghanistan and Iraq. (Photo by Tolga AKMEN / AFP)

LONDON — A fearless campaigner for democratic openness? Or a criminal trying to avoid justice? WikiLeaks founder Julian Assange is a highly polarizing figure.

Australian national Assange, 49, is the figurehead of the whistleblowing website that exposed government secrets worldwide, notably the explosive leak of US military and diplomatic files related to the Iraq and Afghan wars.

But he has spent most of the past decade either in custody or holed up in Ecuador’s London embassy as he has tried to avoid extradition — first to Sweden to answer allegations of rape, and then to the United States.

Born in Townsville, Queensland, in 1971, Assange has described a nomadic childhood and claims to have attended 37 schools before settling in Melbourne.

As a teenager, Assange discovered a talent for computer hacking, which soon brought him to the attention of Australian police.

He admitted most of the charges levelled against him and walked away with a fine.

After launching WikiLeaks in 2006 with a group of like-minded activists and IT experts, he was constantly on the move, bouncing between cities and frequently changing his phone number.

“We are creating a new standard for a free press,” Assange told AFP in an interview in August 2010.

His current legal saga began in 2010 — soon after he published revelations from classified documents about US military campaigns in Iraq and Afghanistan — with rape allegations in Sweden, which he always denied.

He was in Britain at the time but dodged an attempt to extradite him to Sweden by claiming political asylum in the Ecuador embassy.

For seven years he lived in a small apartment in the embassy, exercising on a treadmill and using a sun lamp to make up for the lack of natural light in a situation he compared to living in a space station.

It was revealed in April that Assange had fathered two children with his partner, South Africa-born lawyer Stella Moris, while at the embassy.

Moris, 37, told The Times newspaper in an interview published on Saturday that she informed Assange she was pregnant with Gabriel, now three, by writing it down on a piece of paper to avoid surveillance.

He watched the birth on livestream and the baby was smuggled into the embassy with the help of an actor friend posing as his father, she said.

Moris described Assange as someone who “loves children” and a “hands-on father,” who speaks to his sons regularly, although to his youngest, Max, now aged 18 months, he is a “disembodied voice on the phone.”

Assange has an adult son, Daniel, who was born near Melbourne in 1980, and at least one more child, who was living in France.

Moris, who changed her name from Sara Gonzalez Devant for security reasons after getting involved with Assange, said the couple planned to marry and he proposed using a virtual-reality headset.

Assange’s situation changed after the new government in Quito turned him over to British police in April 2019. He was arrested for jumping bail and jailed.

Swedish prosecutors confirmed last year they had dropped the rape investigation, saying that despite a “credible” account from the alleged victim there was insufficient evidence to proceed.

But as he had feared, after his arrest it was revealed that Washington was charging him with violating the US Espionage Act over the 2010 leaks.

Assange was initially supported by human rights groups and newspapers that once worked with him to edit and publish US war logs.

They included a leaked video showing a US military Apache helicopter firing on and killing two journalists and several Iraqi civilians on a Baghdad street in 2007.

But many were horrified when WikiLeaks dumped unredacted documents online, including the names of informants, and Assange fell out spectacularly with erstwhile media partners such as The New York Times and The Guardian newspaper.

Questions also mounted about his relationship with Russia.

Special prosecutor Robert Mueller’s probe into interference in the 2016 US presidential election found that Russians hacked Democrat Hillary Clinton’s campaign, “and publicly disseminated those materials through various intermediaries, including WikiLeaks.”

In a preliminary court hearing in London in February, Assange’s lawyer alleged US President Donald Trump had promised a pardon if he denied that Russia leaked the emails that so damaged Clinton.

The White House denied the claim and Trump — who in 2016 declared his “love” for WikiLeaks — has always angrily rejected allegations that his campaign colluded with the Kremlin.

Read Next
Public directly asking resource persons on budget hearings ‘against the rules’ — solon
EDITORS' PICK
Manila is 78th most expensive city in the world for foreign workers
TeaM Energy pushes development programs to help in pandemic rebound
Want to help local farmers? Shop small and eat Real Food
Piolo Pascual: The Ultimate Heartthrob continues to level up
ICC is everything but a court of ‘white people’
Garcia softens stance, meets IATF halfway on swab-upon-arrival policy
MOST READ
Sharon Cuneta on living in the US: ‘Nagagawa ko lahat ng normal na bagay’
ICC is everything but a court of ‘white people’
After flying PAF jet, AFP chief vows more modern aircraft for PH defense
Duterte-Duterte tandem possible but ‘winnability is another question’ — Binay
Don't miss out on the latest news and information.