MANILA, Philippines — They end up on our sidewalks and in our waterways, those blue-and-white medical masks that used to be on someone’s face. They clog our rivers and drift out to sea where fish and other creatures could mistake them for food or they could dissolve into microplastics, harming corals and the marine ecosystem.

Suddenly, contracting the dreaded coronavirus from discarded masks isn’t the only concern of the public. Disposing the protective gear properly to minimize harm to the environment has become a headache.

This is part of a large and growing problem with personal protective equipment (PPE) during this pandemic, according to environment officials and activists in interviews this week. They believe that one way to reduce medical waste and still protect the people’s health is to adopt reusable PPE.

The Department of Environment and Natural Resources (DENR) reports that over 19,000 metric tons of infectious wastes, including PPE suspected of harboring pathogens, have been collected in just four months — from April to July — at the height of the lockdown.

But what is more challenging for the DENR are the infectious wastes coming from households: masks, food waste and other contaminated materials, which are hardly segregated and mixed with municipal waste, said Geri Geronimo Sañez, chief of the DENR’s hazardous waste management division.

The numbers are expected to rise with no immediate end in sight for the pandemic, prompting health and environmental groups to demand that the government lay out new waste disposal standards for the general public and promote reusable PPE whenever possible.

Before the pandemic, it was mostly hospitals that dealt with infectious wastes, according to Paeng Lopez, a campaigner for Health Care Without Harm. But after the COVID-19 outbreak and with the universal and mandatory use of masks and face shields, that responsibility was added to the public.

Global scientific consensus says surgical masks are the most effective personal protection against droplets that carry the coronavirus. But these masks are made of nonwoven polypropyline fabric, a type of plastic that is not biodegradable.

Most people are unaware that even masks have to be treated as infectious wastes in accordance with Republic Act No. 6969 and Republic Act No. 9003, both of which prescribe guidelines for hazardous waste management, Sañez said.

He strongly advised households to segregate and isolate the masks for at least three days—the period that a virus could survive outside a host — before disposing of them.

“In fact, I even suggest to others that they destroy it, cut it, because others may pick those up, wash it and reuse it,” Sañez said.

Poorly disposed masks will end up scattered on roads or in rivers, where the DENR has been scooping them up.

As with any waste, masks pose a threat to wildlife, said Marianne Ledesma, Greenpeace Philippines campaigner.

“Any plastic floating in bodies of water can be mistaken as food by marine creatures and they can be choking hazards. And when they break down into microplastics, reef corals start to absorb them as food and these corals can’t digest or release them back in the water,” she said. 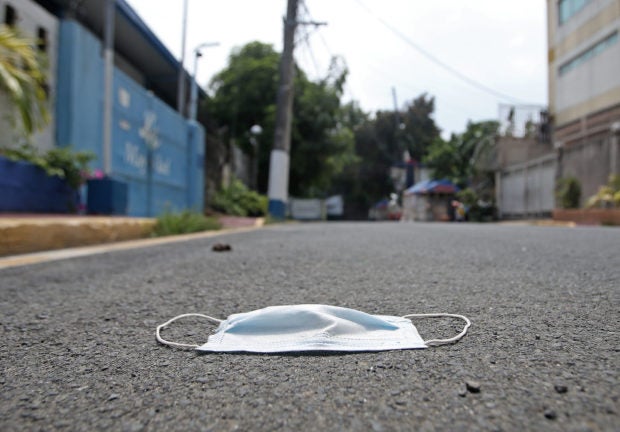 BLOWN IN THE WIND A surgical mask has been left lying on Belen Street in Manila last July and was probably among those blown in the wind and later formed part of the 19,000 tons of infectious waste, including other personal protective equipment, collected that month, according to the Department of Environment and Natural Resources. —RICHARD A. REYES

“You’re killing wildlife, at the same time you’re killing an entire ecosystem because those corals are a habitat for other wildlife too,” she said.

Recent studies estimate that about 8 million metric tons of plastic of all types end up in the world’s ocean annually.

The surge in PPE use, as well as the plastic generated by takeout deliveries and e-commerce, “really worsens” the waste problem, Ledesma said.

The same is happening inside hospitals. Because of the contagious nature of the disease, hospital personnel are required to change their PPE gear regularly to prevent contamination, Lopez said.

“Health-care workers use so much PPE and they generate a lot of waste at the moment. Most of it is because they’re observing the World Health Organization (WHO) recommendation to treat everything as infectious waste, so even pieces of paper or food waste that are in the vicinity of red zones in hospitals are discarded as such,” he said.

Lopez explained that hospitals have to first disinfect their infectious wastes, using either autoclave, alkaline hydrolysis or microwave treatment, before throwing them out for garbage collection.

Some hospitals have their garbage transported to designated medical waste landfills like Metro Clark in Tarlac and Cleanway in Silang, Cavite. Others go to municipal landfills but are segregated from municipal wastes.

For now, the system in place is sufficient, Sañez said.

But apart from proper waste management, Lopez and Ledesma also urged the public and hospitals to consider reusable PPE to reduce the total waste volume.

The 110-year-old St. Paul Hospital in Iloilo was one of the first medical establishments to adopt and promote reusable PPE.

The private hospital run by Paulinian sisters had their first suspected COVID-19 in January, who later recovered. By March, just as the cases started to rise nationwide, the hospital decided to make its operations sustainable, said hospital administrator Sr. Arcelita Sarnillo.

Like other hospitals, they also had trouble procuring PPE, particularly coveralls, or protective suits, because of the lockdown restrictions imposed across the country.

They first used plastic raincoats as substitute for medical coveralls.

“It was the first thing that came to mind, just something to protect because everybody was not ready,” she said. “Later we began to make our own reusable PPE made of taffeta cloth with silver backing, [a nonpermeable cloth] used to make parachutes and umbrellas.”

That saved the hospital over P10 million a month, and millions of pesos more in reduced waste. But despite its advantages, Sarnillo said the reusable protective suits was stigmatized by some local doctors who shunned them.

“I have heard doctors question our PPE because they’re not disposable, to which I tell them, ‘Shouldn’t the fact that medical-grade PPE are disposable mean they are not [of superior] quality and unsustainable?’” she said.

Sarnillo noted that there were very few cases of hospital staff getting COVID-19 even after they shifted to reusable PPE, including cloth masks.

“This is also an issue of political will and being committed to doing your part in sustainability,” she said. “It’s a matter of explaining and making them understand why you need to do this.”