How a ‘carinderia’ cooked 6,000 food packs for frontliners

MANILA, Philippines — On a normal day, Heaven’s Touch (HT), a small family-run eatery in Sampaloc, Manila, would serve budget meals to students. But when nearby schools and universities were forced to close down and shift to online classes due to the new coronavirus disease (COVID-19) pandemic, it was left without customers like most household-based food establishments.

The “carinderia” felt its loss early in March when San Lazaro Hospital, a few blocks away, recorded the first case of COVID-19 death outside China. Universities had suspended classes even before the Luzon-wide lockdown was declared.

“We were aware of the situation, but in terms of food and what to do next, we have nothing because everything was sudden. In terms of capability to be prepared, we lacked time,” Reggie Piadoche, 27, who supervises daily operations of HT, said in Filipino.

The family relied on the eatery’s remaining supplies, like raw meat and canned goods, to survive the first few weeks of the lockdown. They were also forced to use their savings for their everyday needs.

“We approached the loss of business amid the pandemic like how we dealt with summer classes. But at least during summer classes, there are still students who come to eat,” he said.

Despite the difficulty, the eatery saw an opportunity to help other people. The family thought of giving food packs to front-liners of a nearby hospital, University of Santo Tomas (UST), where most of their student-customers come from, offering what they do best—cooking.

“We thought of giving back, somehow … [W]e’ve been here since 2006 and mostly our customers are from UST. It was our treat, at first, and when I posted it on Facebook, it trended,” said Reggie, who coordinates with possible sponsors of their food drives and handles their funds.

The carinderia began in 2003, but it was only in 2006 that its management, along with the other businesses in the building, was transferred to Reggie’s mother Gay Piadoche, 53, who is also the cook. 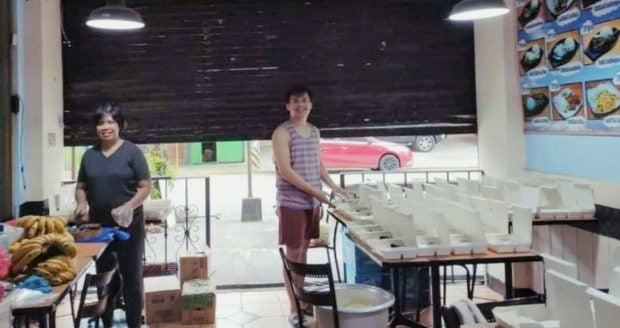 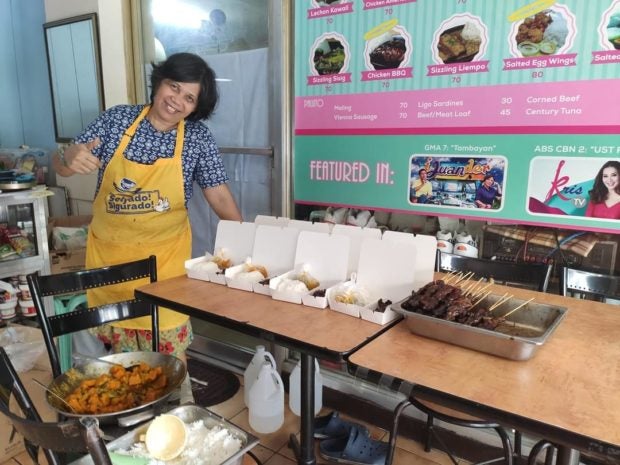 GIVING BACK Top photo shows Gay and her son Reggie Piadoche preparing food packs to be given for free to health workers as well as policemen, village guards and the homeless. Gay, who is also the cook of Heaven’s Touch eatery in Sampaloc, Manila, is now in charge of the establishment, which has been at the forefront of food delivery charities amid the coronavirus pandemic. —PHOTOS BY REGGIE PIADOCHE/CONTRIBUTOR

HT started giving food packs for breakfast, lunch and dinner to doctors and nurses. Eventually, it served medical personnel in other hospitals, looked for homeless people, village guards (“tanod”) and policemen at checkpoints.

Small businesses and big corporations, such as Mega Corp., NutriAsia and Del Monte Corp., have reached out to the eatery to give donations. Encouraging messages and monetary donations from friends and customers have inspired the family to continue their mission.

One celebrity even took notice and chose the eatery to be a partner, this time in helping stranded individuals and blue-collar workers in the city. HT used the P300,000 budget to fund its project to produce 2,500 more food packs.

Reggie said the family was not into recovering lost earnings, especially because most of their student-customers are in the provinces or do not live nearby, while partnerships with their benefactors are usually exchange deals. They are simply thankful that food donations come as simply a return of capital.

As of the month of August, HT has distributed 6,000 food packs. It is already soliciting funds and seeking partner brands. But it is also looking forward to a clear government plan to allow the eatery to prepare for the coming days—or years.

“What my mother and I wish is for the situation to at least lighten, like the prayers of medical front-liners. We want a break because these past few weeks were so heavy. We pray that even though it’s not totally OK, at least the situation would lie low,” Reggie said.

He believes that a miracle will happen soon, like in HT’s past advocacy.

“We feel proud that we have given something, somehow. We are really happy because in our own little way, even though it’s not our money, we managed to gather the resources that we have to help,” he said.