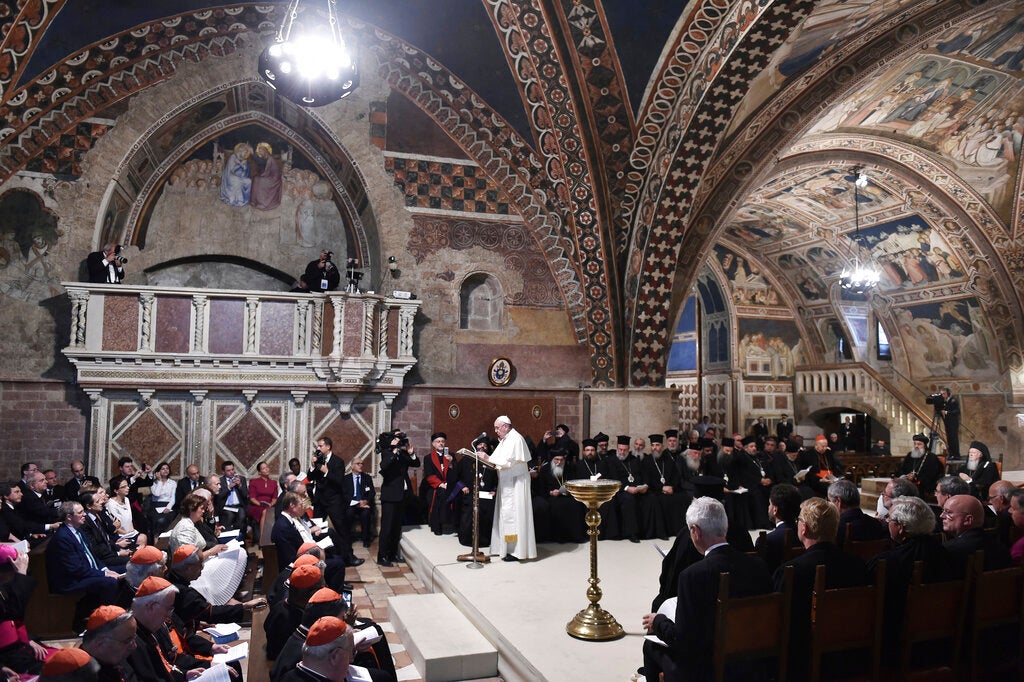 FILE – In this Tuesday, Sept. 20, 2016, Pope Francis, standing, leads a prayer with representatives of different religions, inside the Basilica of St. Francis, in Assisi, Italy. The Franciscan friars in Assisi say Pope Francis will journey there next month to sign a new encyclical, expected to stress the value of brotherly relations during and after the pandemic, in what could be his first visit outside of the Rome area since Italy went into lockdown. (Tiziana Fabi/Pool Photo via AP, File)

VATICAN CITY— Pope Francis is next month set to make what would be his first visit outside Rome since Italy was put under lockdown in early March when it became the first country in Europe to feel the full brunt of the coronavirus pandemic.

The pope is to journey to Assisi, the birthplace in the central Italian region of Umbria of his namesake saint, to sign an authoritative papal letter to clergy and faithful worldwide — a document known as an encyclical, the Vatican said Saturday.

The encyclical is expected to stress the value of brotherly relations during and after the pandemic, a theme Francis evoked repeatedly during the pandemic. Encyclicals lay out a pontiff’s views on important issues and usually shape Catholic teaching and policy in the years to come.

“Because of the health situation, it’s the desire of the Holy Father that the visit be carried out privately, without any participation by the faithful,” a reference to rank-and-file Catholics, the Vatican said.

The encyclical will be entitled in Italian “’Fratelli tutti’ sulla fraternita’ e l’amicizia sociale.” The English-language version’s title wasn’t given, but it roughly translates to “’Brothers all’ on brotherhood and social friendship.”

“Brothers all,” is a saying of St. Francis that the pope has cited in the past.

Francis has repeatedly stressed how the COVID-19 pandemic dramatically revealed how fragile existence can be and how vitally important it is for people to unite in helping each other, with special attention to the poor.

Francis’ last trip away from Rome was to the southern Italian city of Bari, in late February of this year, just as the COVID-19 outbreak was erupting in northern Italy.

A couple of weeks later, the Italian government banned travel between regions and even towns until late spring, when the spread of the coronavirus in the country began to slow.

This year seems set to become the first year in decades that a pope hasn’t made a pilgrimage abroad.

Francis will celebrate Mass near St. Francis’ tomb, which is under the lower level of the Basilica of St. Francis. The next day, Oct. 4, the church celebrates the saint’s annual feast day.

“It is with great joy and in prayer that we welcome and await the private visit of Pope Francis,” said the Rev. Mauro Gambetti, an official of the Franciscan Sacred Convent in Assisi. The one-day trip will “highlight the importance of and the need for brotherhood,” he said in a statement.

Francis issued his last encyclical, “Praised Be,” 2015. In the landmark document, Francis exhorted people to work together worldwide on healing and protecting the natural environment.