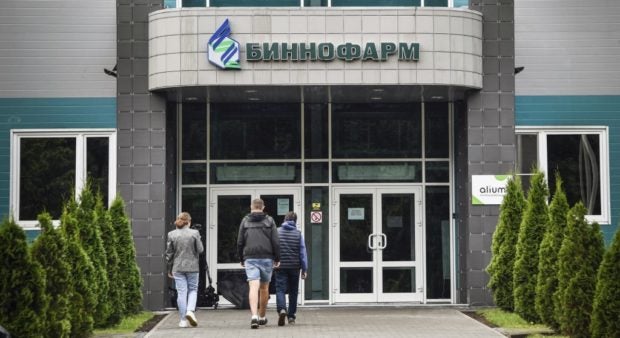 A view of the pharmaceutical factory Binnofarm in the town of Zelenograd outside Moscow on August 12, 2020, where Russia is starting to produce the anti-coronavirus vaccine. Russia claimed it has developed the world’s first vaccine offering “sustainable immunity” against the coronavirus, despite mounting skepticism about its effectiveness as fears grow over a second wave of infections across the globe. President Vladimir Putin said the vaccine was safe and that one of his own daughters had received the inoculation, dubbed “Sputnik” after the pioneering 1950s Soviet satellite. (Photo by Alexander NEMENOV / AFP)

LONDON — Early tests of a Russian coronavirus vaccine showed encouraging results when details were published Friday, but experts said the trials were too small to prove safety and effectiveness.

Russia announced last month that its vaccine, named “Sputnik V” after the Soviet-era satellite that was the first launched into space in 1957, had already received approval.

This raised concerns among Western scientists over a lack of safety data, with some warning that moving too quickly on a vaccine could be dangerous.

In the Lancet study, Russian researchers reported on two small trials, each involving 38 healthy adults aged between 18 and 60, who were given a two-part immunisation.

Each participant was given a dose of the first part of the vaccine and then given a booster with the second part 21 days later.

They were monitored over 42 days and all developed antibodies within the first three weeks.

The report said the data showed that the vaccine was “safe, well tolerated, and does not cause serious adverse events in healthy adult volunteers.”

The trials were open label and not randomized, meaning there was no placebo and the participants knew they were receiving the vaccine and were not randomly assigned to different treatment groups.

Researchers underlined that larger and longer trials — including a placebo comparison — would be needed to establish the long-term safety and effectiveness of the vaccine for preventing Covid-19 infection.

The report said the 76 participants of these trials would be monitored up to 180 days, adding that a more rigorous phase 3 clinical trial was planned with the involvement of 40,000 volunteers “from different age and risk groups.”

‘Powerful response to the sceptics’

Kirill Dmitriev, who heads a Russian investment fund behind the vaccine, told an online news conference in Moscow that the Lancet publication “is a powerful response to the sceptics who unreasonably criticised the Russian vaccine.”

Naor Bar-Zeev of Johns Hopkins Bloomberg School of Public Health, who was not involved in the study, said the research was “encouraging but small,” adding that it did not give any data on effectiveness among older age groups, who are particularly vulnerable to Covid-19.

“Showing safety will be crucial with Covid-19 vaccines, not only for vaccine acceptance but also for trust in vaccination broadly,” he said in a commentary in the Lancet.

“Since vaccines are given to healthy people and, during the Covid-19 pandemic, potentially to everyone after approval following phase 3 trials, safety is paramount.”

The pandemic has seen an unprecedented mobilization of funding and research to rush through a vaccine that can protect billions of people worldwide.

This week the US urged states to get ready for a potential Covid-19 vaccine rollout two days before the presidential election in November, sparking concerns President Donald Trump’s administration is accelerating research to fit a political timetable.

Russia has said that industrial production of its version is expected from September.

President Vladimir Putin said in early August that the vaccine gave “sustainable immunity” and that one of his own daughters had been inoculated, even though Russia’s health ministry said clinical trials were not yet complete.

The World Health Organization has urged Russia to follow established guidelines and go “through all the stages” necessary to develop a safe vaccine.

Sputnik V was developed by the Gamaleya research institute for epidemiology and microbiology in Moscow in coordination with the Russian defence ministry.

It uses a cold-causing adenovirus, which is then modified and combined with a part of the new coronavirus, SARS-CoV-2.

Dmitriev said vaccine production “will initially be aimed at a Russian market, but we hope to have the possibility to supply the vaccine to an international market,” signalling interest from around 40 countries.

The WHO insisted it would never endorse a vaccine that has not proven safe and effective and also said it did not expect widespread immunisation against the novel coronavirus until mid-2021.

The organisation said a total of 176 potential vaccines were being developed worldwide, including 34 being tested on people. Among those eight are at stage three, the most advanced.