Greek FM heads to UN amid tense standoff with Turkey 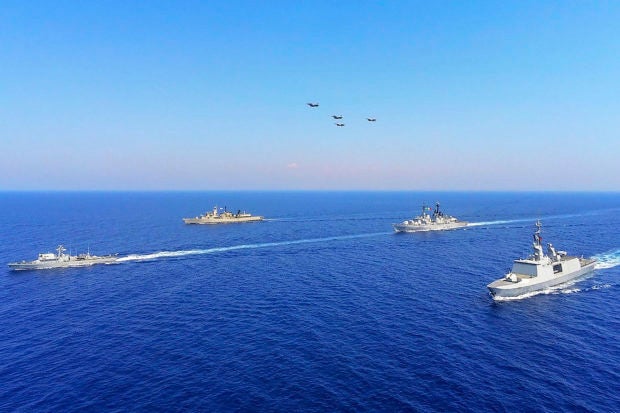 In this photo provided on Monday, Aug. 31, 2020, by the Greek Defense Ministry, warships from Greece, Italy, Cyprus and France, participate in a joint military exercise which was held from 26-28 of August, south of Turkey in the eastern Mediterranean sea. Turkey on Monday, Aug. 31, accused Greece of “piracy” and warned it will stand up to Athens’ alleged efforts to militarize islands near its coast. (Greek Defense Ministry via AP)

ATHENS, Greece — Greece’s foreign minister is heading to New York for talks with the United Nations secretary-general, amid escalating tensions with Turkey over maritime boundaries.

The Foreign Ministry said Nikos Dendias was traveling Friday for a meeting with Antonio Guterres.

Talks will focus on “issues of international and regional interest, with an emphasis on current developments in the eastern Mediterranean and the Cyprus issue, as well as the role of the U.N.”

Neighbors and NATO allies Greece and Turkey have been locked in a tense standoff in the eastern Mediterranean, where Turkey is prospecting the seabed for energy reserves in an area Greece claims as its own continental shelf. Ankara says it has every right to prospect there and accuses Greece of trying to grab an unfair share of maritime resources.

Greece’s armed forces have been placed on alert. Both countries have sent warships to the area and have been carrying out live-fire exercises between the islands of Crete and Cyprus and Turkey’s southern coast, while simulated dogfights between Greek and Turkish fighter pilots have multiplied over the Aegean Sea and the eastern Mediterranean. A Turkish and a Greek frigate collided last month, reportedly causing minor damage to the Turkish frigate but no injuries.

The current crisis is the most serious in the two countries’ relations in decades. The neighbors have come to the brink of war three times since the mid-1970s, including once over maritime resources in the Aegean Sea along which both share a border.

On Thursday, NATO Secretary-General Jens Stoltenberg said the two sides had agreed to start “technical talks” to reduce the risks of military “incidents and accidents.”

But Athens quickly denied any such agreement, saying neighboring Turkey must first withdraw its ships from the area where it is carrying out gas and oil prospecting. Ankara, on the other hand, said it backs Stoltenberg’s initiative for military and technical talks and called on Greece to do the same.

Read Next
Widespread COVID vaccinations not expected until mid-2021—WHO says
EDITORS' PICK
Powered by style, innovation and passion
Why Tagle is a leading papal contender
House energy committee chair Arroyo bats for cheap electricity
KWF has no power to ban, censor written works – Lagman
In Borongan, nuns play hoops (not mahjong)
A laptop that maximizes your WiFi so you can maximize your productivity
MOST READ
Why Tagle is a leading papal contender
Arjo Atayde reveals proposal to Maine Mendoza was ‘more than a year’ in the making
My neighbor FVR: From soldier to president
Gilas gets solid core with Clarkson, Sotto planing in
Don't miss out on the latest news and information.