MANILA, Philippines — The millions of funds used for the “white sand” makeover in Manila Bay’s coastline could have been “better spent” to aid pandemic-hit sectors, Senator Joel Villanueva said Friday.

“Environmental protection cannot be achieved by mere aesthetics alone, and certainly not at the cost of sacrificing one area to preserve or make the other more pleasing,” Villanueva said in a message to reporters.

“This will lead to further environmental degradation, if not fool-hardly and waste of resources in a time of great hunger and economic hardship,” he added.

The project is part of the Manila Bay Rehabilitation Program launched by the Department of Environment and Natural Resources (DENR) early last year in compliance with a 10-year-old Supreme Court order for the government to clean up coastal areas in Metro Manila.

Environmentalists and fisherfolk groups, however, questioned DENR’s project, calling it “artificial rehabilitation” that focused on appearance.

But Antiporda defended the project, saying that the “white sand,” which is made of crushed dolomite transported from Cebu to Manila, will discourage people from throwing garbage in the area. 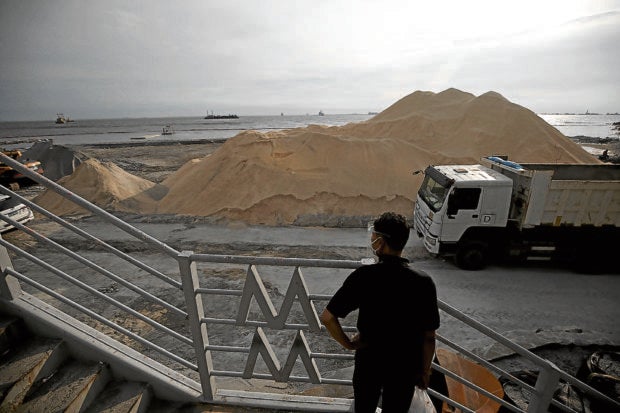 TO SAVE THE BAY A 500-meter stretch of the 190-kilometer coastline of Manila Bay will be covered with sand derived from crushed dolomite in a bid by the
government to beautify the scenery and encourage the public to protect it. Environmental activists are not exactly pleased. —RICHARD A. REYES

“Funds for this project could have been better spent in buying the needs of our students, or providing more assistance to displaced workers and [overseas Filipino workers],” Villanueva, chair of the Senate labor committee, went on.

Meanwhile, Senator Panfilo Lacson said he would think that the project is a “worthwhile endeavor” if “proper studies and consultations with experts, especially on its sustainability and effects on the environment, [as well as] due diligence on the financial investment were made before its implementation.” [ac]