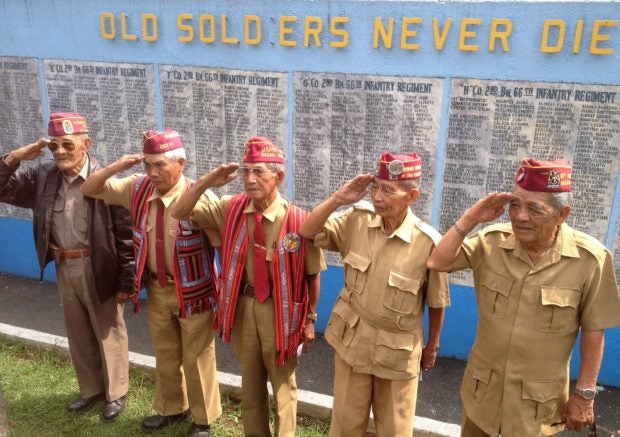 A WALL OF VALOR at the Baguio Veterans Park lists the names of Filipino soldiers and guerrillas who resisted the Japanese occupation from 1942 to 1945, including these war veterans in this stock photo. PHOTO BY VINCENT CABREZA

BAGUIO CITY–Seventeen veteran soldiers, who helped liberate Baguio City from the Imperial Japanese Army in 1945, were honored on Thursday, the 75th anniversary of the surrender of Gen. Tomoyuki Yamashita at Camp John Hay here.

Due to the quarantine, the veterans were not asked to join any program commemorating the surrender but will be given commemorative medals that will be delivered to their homes.

A wreath was offered at the veterans’ park here where a wall of valor engraved with the names of Filipino soldiers and guerrillas who organized a resistance campaign during the Japanese occupation from 1942 to 1945 stands.

Men and Women of History

They were honored for their role in fighting during the most critical moments of the global conflict, according to the city information office. Their accounts and memoirs make up the official record of the war.

“The signing (of Japan’s official surrender) was a solemn occasion as the world shifted its focus from conflict to recovery. The devastation in Asia, Europe, and elsewhere demonstrated that in global conflict, there are no real victors. Survivors feel the loss of loved ones, the despair of seeing the consequences of war around them, and the immense burden of rebuilding,” said United States Ambassador to the Philippines Sung Kim in a message.

“History has demonstrated that the United States, Philippines, and Japan are strongest when we work together as friends, partners, and allies,” the ambassador said, given the “entirely new and unprecedented set of challenges (of the coronavirus disease) to our people, our economies, and our nations.”

A painting rendered by National Artist Fernando Amorsolo depicts Yamashita signing the surrender papers on Sept. 4, 1945 atop the fireplace of the official residence of the American ambassador at Camp John Hay.

The signing at John Hay followed the formal declaration of surrender by Emperor Hirohito on Sept. 2, 1945, a month after the United States dropped atomic bombs in Hiroshima and Nagasaki cities in Japan.

Yamashita’s surrender was symbolic because of Baguio’s role in World War II. Japanese planes attacked Camp John Hay on Dec. 8, 1941, hours after the bombing of Pearl Harbor in Hawaii that started the war.

Yamashita surrendered on Sept. 2, 1945, in Kiangan town, Ifugao province, where the Japanese Army retreated after American bombers flattened Baguio in April of that year. Following a post-war trial, Yamashita was executed as a war criminal in 1946.