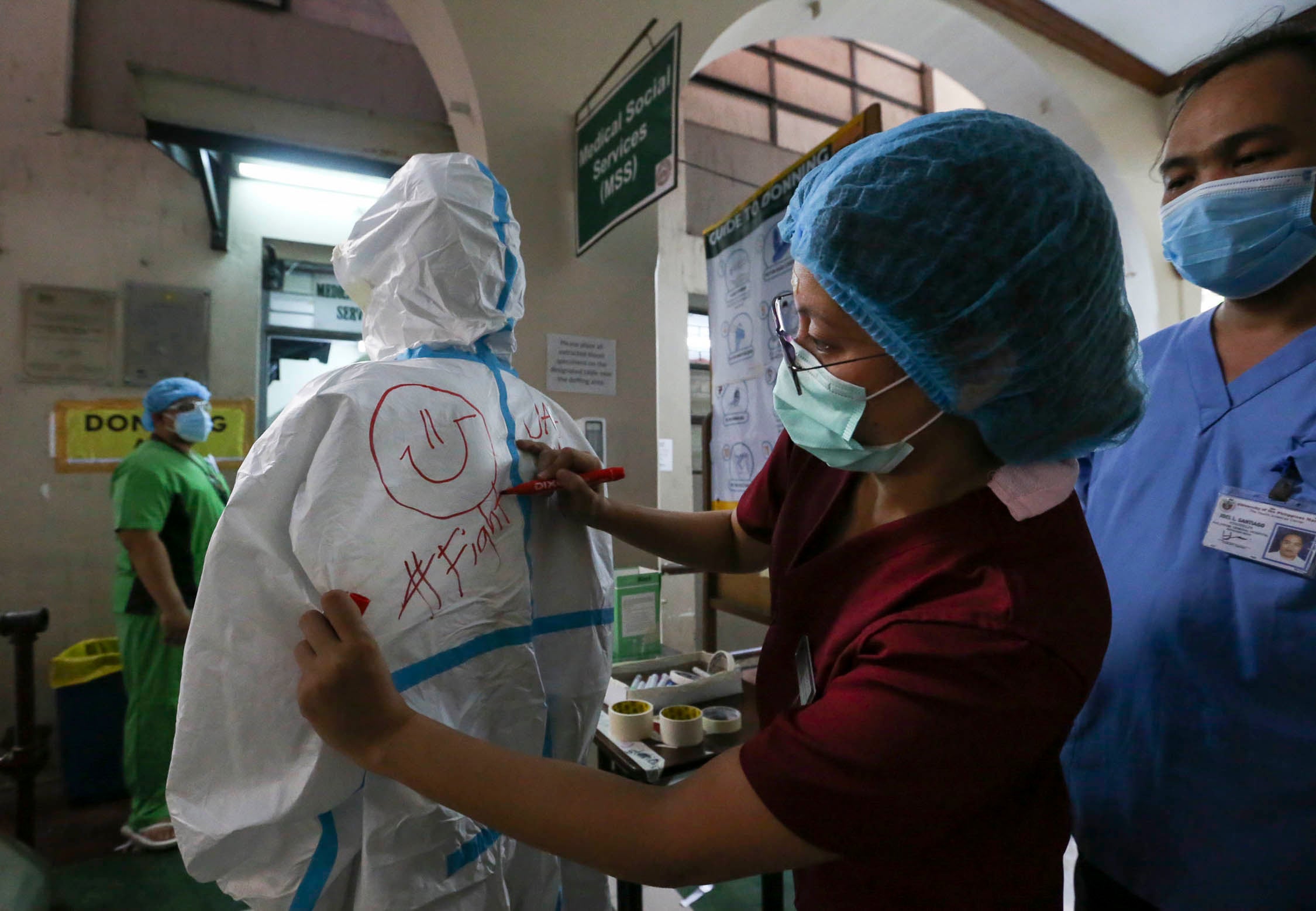 FIGHT, NURSE A government nurse draws a smiley and #FIGHT on the back of an intensive care nurse at Philippine General Hospital in Manila. —LYN RILLON

MANILA, Philippines — After an international study revealed that Filipino nurses and medical technologists are among the lowest-paid health workers in Southeast Asia, nurses’ groups complained about recent government actions that “insult” and “degrade” them while they wallow in involuntary servitude.

“If the government wants to keep our health workers within our country, then we must offer competitive salaries and benefits so they will choose to stay, instead of being forced to,” said lawyer Faith Paquiz, spokesperson of Ang Nars party list.

The government, Paquiz said, has already violated nurses’ right to travel and seek employment abroad when the Philippine Overseas Employment Administration issued Board Resolution No. 09-2020 that bans the deployment of nurses abroad, a directive that is prohibitory, rather than regulatory.

“Through this ban, our government is obstructing life-changing opportunities that may be lost forever by promoting involuntary servitude. While secondarily, the right to liberty of abode and the right to travel is being curtailed. Primarily, the right to life, liberty and property or to earn a competent salary and decent living is being deprived of our health-care workers without due process of law,” Paquiz said.

The nurses did not complain because they knew that they were and continue to be needed in the country but the government added insult to injury when the Department of Budget and Management (DBM) added a provision in a budget circular that would adjust the numerical classification of government nurses.

Pacquiz said that while they were gratified that the DBM finally enforced the Supreme Court ruling that allowed the increase in the pay grade of entry-level nurses, the reclassification under DBM Budget Circular No. 2020-4 effectively meant demotion in rank and diminution and distortion in position, classification, duties, seniority and opportunity.

Hoping in a promise

For Kenneth Goyena, a Nurse 2 at Philippine General Hospital (PGH) in Manila for three years, the move was “demoralizing, more so insulting” as it “equates their acquired skills and years of service and experience to that of an entry-level nurse.”

Goyena said President Duterte’s statement to prioritize the welfare of frontliners kindled a little hope for those who decided to stay and serve in the Philippines.

Most nurses, he said, have been holding on to that promise.

“But with that circular, our hopes of getting a better life in the Philippines, that we all know could be achieved abroad, were shattered by the DBM,” he said.

“We are appealing as a group… We are already studying the legal basis for the reconsideration and the preservation of the status quo, such as violation of the constitution, wage distortion,” he added

On Wednesday, Labor Secretary Silvestre Bello III said the government might allow more workers to leave for abroad, but he would have to first meet with the Department of Health, the Professional Regulation Commission and Philippine Nurses Association to determine “if we can already afford to send some of our [frontliners] abroad.”

“My concern is that we might be forgetting the fact that we are under a health emergency situation. Because if there will be an uncontrolled deployment of our medical workers abroad, I don’t want us to reach that point where there might be no one to look after our sick countrymen,” he added.

Bello made the remark as another group of nurses, Filipino Nurses United, appealed for government to lift the deployment ban.

“We must understand that they also have families who rely on them, who they need to lift from poverty and hunger,” Abenojar said.

Bello, a former justice secretary, agreed that the rights of health workers should also be considered.

Goyena was a little cynical at his nurses’ station at PGH.

“Our profession suffers so much oppression from both the government and the private sector for decades now,” the young nurse said.

“This pandemic somehow placed us under the spotlight, finally getting our sentiments noticed. Just like an umbrella, you only remember it when it rains,” Goyena added. (With a report from Jovic Yee)