No immediate release for Pemberton 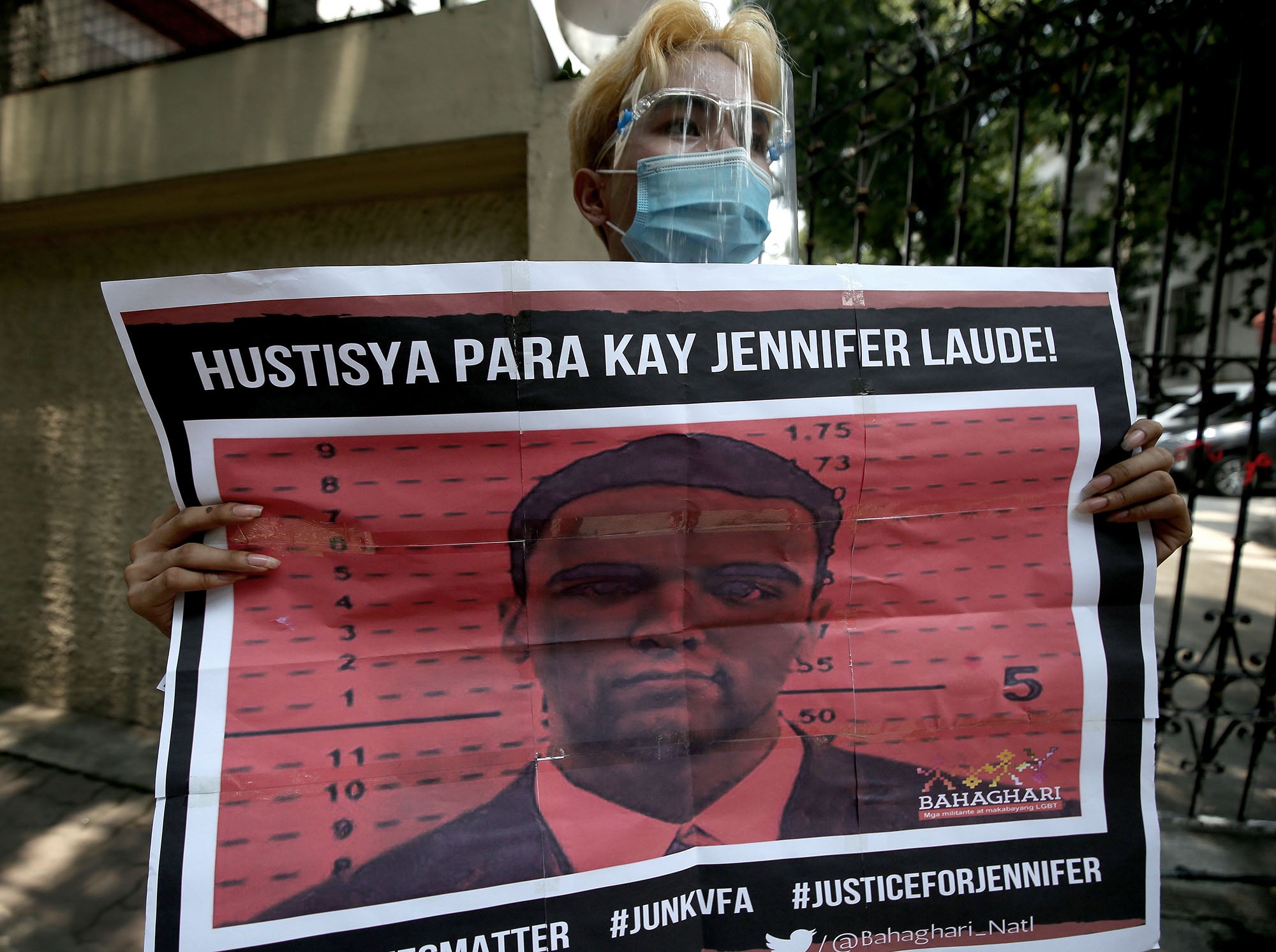 NO JUSTICE, NO RELEASE Members of the LGBTQ rights group Bahaghari on Thursday express their opposition to the early release of former US Marine Joseph Scott Pemberton and demand justice for transgender Jennifer Laude,whom he choked to death in Olongapo City in 2014. Pemberton was sentenced in 2015 to 10 years in prison for the homicide. —RICHARD A. REYES

MANILA, Philippines — A dispute over whether former US Marine Joseph Pemberton should be given good conduct time allowance (GCTA) while serving his sentence for killing transgender Jennifer Laude is blocking his immediate release, and he won’t be freed until a court resolves the issue raised by his victim’s family, officials said on Thursday.

Judge Roline Ginez-Jabalde of the Olongapo City Regional Trial Court (RTC), who sentenced Pemberton to a maximum 10 years in prison for the 2014 killing of Laude, ruled on Monday that he had already served his sentence by more than 10 months with good conduct credits and ordered his release.

Virgie Lacsa Suarez, a lawyer for the Laude family, had filed a motion against Pemberton’s early release.

“No good conduct can be attributed to someone in solo confinement, did not relate to other convicts, never participated in any rehab program, never did any authorized work activities—to warrant a single credit under good conduct clause,” Suarez said.

She said the Laudes were shocked and devastated when they learned about the court’s release order.

“They now realized why Pemberton was in a hurry to pay the civil damages. It was all a ploy. But we’re not giving up the case,” Suarez told the Inquirer.

Justice Undersecretary Markk Perete said the Bureau of Corrections (BuCor) “will not yet process the release of Pemberton” pending the resolution of the Laude family’s motion for reconsideration.

Foreign Assistant Secretary Eduardo Meñez said the release order was still on appeal, “so nothing appears to be final yet.”

In a statement, BuCor said it respected the court processes “and will wait for the resolution” of the motion. “Meanwhile, the normal release process is on hold,” it said.

The court noted that Pemberton had already served a total of 3,690 days, more than the maximum penalty it imposed for his homicide conviction.

The total number of days was based on computations by BuCor, which said Pemberton served 2,142 days in jail and obtained an additional 1,548 days in good conduct time credit.

Since his conviction in November 2015, Pemberton has been held at a special military jail in Camp Aguinaldo, Quezon City, as part of the US-Philippines Visiting Forces Agreement (VFA).

Romel Bagares, one of the counsels for the Laude family, said Pemberton was not entitled to a sentence reduction because the Philippines and the United States did not agree that the GCTA law would apply to him.

“The Visiting Forces Agreement requires both parties to agree specifically on benefits Pemberton may enjoy as a convict under Philippine law. There is no such agreement,” Bagares said.

He said “there is a substantial difference in treatment between someone under the VFA and an ordinary convict,” citing two Supreme Court rulings on visiting US troops who commit crimes in the Philippines.

Presidential spokesperson Harry Roque, another former lawyer for the Laude family, criticized the judge’s decision to give good conduct credit to Pemberton, saying it was “an instance of judicial overreach.”

“To those holding Pemberton, let the executive branch move for reconsideration because the decision on GCTA is an executive function,” he said, stressing that he was speaking for Malacañang.

He said that the Olongapo court’s ruling in favor of Pemberton could affect agreements between the Philippines and the United States, considering that President Duterte had already ordered the abrogation of the VFA.

“I think the President’s decision to terminate the VFA is the true deliverance of justice for Jennifer Laude, because the killing of Jennifer Laude is symbolic of the death of Philippine sovereignty,” Roque said.

He said the VFA showed that “if an American kills a Filipino like an animal, it will only mean five years in prison. That shouldn’t be the case.”

He added that the fact that Pemberton was not under Philippine custody even during his imprisonment was a violation of the country’s sovereignty.

Sen. Risa Hontiveros lamented that Pemberton enjoyed a privilege not granted to many Filipinos, referring to the “swiftness by which our institutions have acted on a white male American’s case.”

She also said Pemberton’s release would be a loss to the LGBTQ community’s fight for equality and justice as his “hate crime” and Laude’s “gruesome killing” got him only a 10-year sentence for which he had served less than six years.

She also deplored Pemberton’s lack of an apology.

“Those years of deafening silence, and now an early release—this is not what Jennifer deserves. Pemberton paid the Laude family over P4.6 million in civil damages, but no amount can ever bring back the life and dignity of Jennifer,” she said.

Members of the LGBTQ rights group Bahaghari on Thursday picketed the Department of Justice, condemning the possible early release of Pemberton.

“Pemberton’s release is two-pronged: it represents the unfettered injustice the LGBTQ community continues to face, and moreover, the government’s continued submission to US imperialism,” the group said in a statement. “Justice for Jennifer cannot exist without both being decisively ended.”

The Laude family and their supporters have started a signature campaign to oppose Pemberton’s early release with a petition on Change.org to keep him in jail and to terminate the VFA.

“Pemberton is not an ordinary American citizen who killed Jennifer Laude on Oct. 11, 2014. He is a lance corporal of the US Marine Corps and thus represents the US military and state,” said the petition initiated by the LGBTQ rights group True Colors Coalition (TCC).

TCC and the Kilusan para sa Pambansang Demokrasya also announced that they would hold a rally on Monday at the Olongapo RTC where the motion for reconsideration of its order to release the American was scheduled for hearing. —(With reports from Dexter Cabalza, Julie M. Aurelio, Leila B. Salaverria, Krixia Subingsubing and Joanna Rose Aglibot)