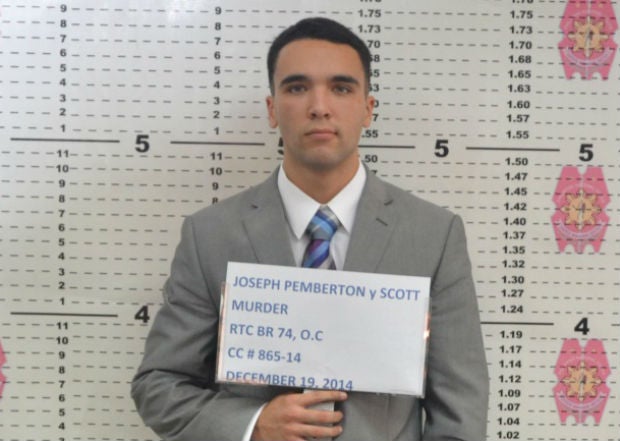 MANILA, Philippines — Convicted United States Marine Lance Corporal Joseph Pemberton is not entitled to the benefit of the Good Conduct Time Allowance (GCTA) program that provides the reduction of prison term for every month of actual detention as a reward for good conduct, a lawyer of the family of slain transgender woman Jennifer Laude said Thursday.

“We disagree with that conclusion with the court. We don’t think that he could actually avail of the benefits of this rule,” Atty. Rommel Bagares said in an interview with ABS-CBN News Channel.

The US serviceman was convicted for homicide in 2015 for the killing of Laude in 2014. He was sentenced to imprisonment from six years to 10 years and is detained in Camp Aguinaldo in Quezon City.

In objecting to the court order, Bagares pointed out that the situation of Pemberton is covered by the Visiting Forces Agreement (VFA) between the Philippines and the United States.

“There are two cases by the Supreme Court that ruled on this question. The first one is the Nicolas case from 2009 and of course this Laude case in 2015,” he said.

“Because in this case, there was also the question of his detention while he is being tried, and the SC also handed down a ruling on that question where the court, following the Nicolas case, said that there has to be a specific agreement between the Philippines and the US under the VFA on his disposition after his conviction,” Bagares explained.

He stressed that “there is no such specific agreement that would apply the GCTA.”

“In fact the court said there is no question here on the equal protection of law. The SC already recognized that under the VFA, any American personnel convicted under the VFA would be in a ‘sui generis’ situation because he or she would be treated under a separate modality and that is a treaty,” Bagares added.

“We are arguing that the GCTA should not have been applied to him for that reason in the absence of a definite agreement that would cover him,” he also said.

The lawyer likewise, pointed out that Pemberton committed a heinous crime that should not qualify for the GCTA.

“This was a hate crime without any question. He should not qualify under the GCTA rules because heinous crimes are not covered by the rules,” Bagares said.