75th anniversary of end of WWII is mostly virtual amid virus 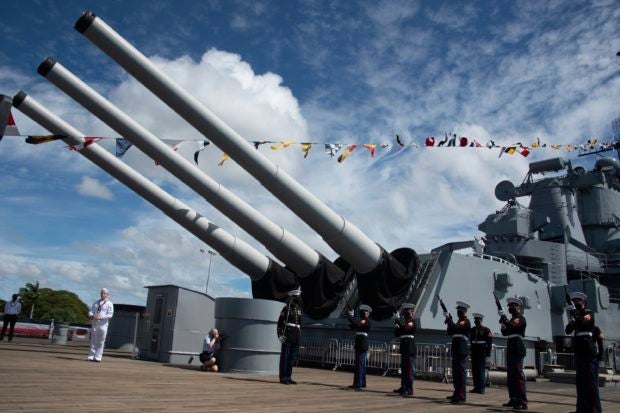 A U.S. Marine detachment performs a rifle salute aboard the USS Missouri during the official ceremonies marking the 75th anniversary of the Japanese surrender that ended World War II, in Honolulu, Wednesday, Sept. 2, 2020. (Craig T. Kojima/Honolulu Star-Advertiser via AP, Pool)

HONOLULU — When Japanese military leaders climbed aboard the USS Missouri in Tokyo Bay on Sept. 2, 1945, the battleship was packed with U.S. sailors eager to see the end of World War II.

On Wednesday, the 75th anniversary of the surrender, some of those same men who served the United States weren’t able to return to Missouri in Hawaii’s Pearl Harbor because of the world’s new war against the coronavirus.

The commemoration initially was supposed to be a blockbuster event with parades, movie premieres, galas, and thousands of people honoring the veterans in their 90s or beyond, some who may be marking the milestone for the last time.

Because of the threat of the virus, the ceremony was scaled down to about 50 people, with local veterans and government officials gathering on the USS Missouri in masks. The names were read of surviving WWII veterans, including 14 who were on the ship the day the Japanese surrendered.

Jerry Pedersen, 95, was one of them, watching history unfold as a young Marine. He and his comrades who live in the mainland U.S. had to watch a live stream of the ceremony from home instead of on the decks of the battleship as planned.

“Well, I was very disappointed, yes. I was hoping to maybe see a friend or two,” he said. “I just want to share with at least my family and a couple of other folks some of the feelings that I was going to express when I got there.” 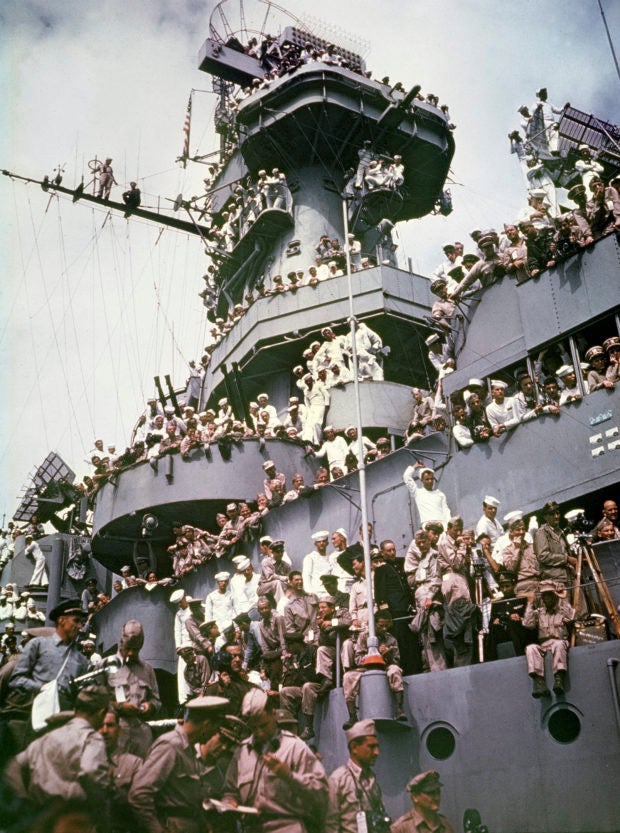 In this Sept. 2, 1945, file photo, servicemen, reporters, and photographers perch on the USS Missouri for the onboard ceremony in Tokyo, in which Japan surrendered, ending World War II. Some U.S. veterans and government officials will gather Wednesday, Sept. 2, 2020, in Hawaii to mark the 75th anniversary of the surrender. (AP Photo, File)

Those feelings are complicated, said Pedersen, who dedicated his life to peace after the war ended.

“War must not happen again,” he said, recalling the words uttered by Gen. Douglas MacArthur on the day the Japanese surrendered. But “we’re still oscillating on many of the things that are necessary to bring us peace.”

Pedersen wore a blue Marine uniform recently sent to him for the ceremony as he watched the event from a laptop at his son’s house in rural West Sacramento, California. His three adult children, their spouses, and some grandchildren gathered around the computer, clapping and hooting when his name was called. Pedersen smiled and gave a fist pump.

“For me, it was the end of the killing, the war that had taken millions of soldiers and many, many, many millions of civilians in wars in Europe and finally in the Pacific that came to an end that day. And we were celebrating,” he told The Associated Press.

“I had the feeling that day. I made a pact with myself that I’m going to be a peacemaker in my life,” said Pedersen, who went to college after the war, got his doctorate, and became a minister.

He watched remotely as WWII-era “warbirds” flew over Pearl Harbor and video messages played from veterans and others in a tribute to those who couldn’t attend or had passed away.

Defense Secretary Mark Esper said he was honored to “commemorate and reflect on the sacrifices and victories of our service members and allies who helped fight for and secure peace.”

At the end of his keynote address, he built a case for a strong military for the future.

“We honor the legacy of those who came before us and recommit ourselves to defending today’s international rules and norms so that the road is safer and is better for generations yet to come,” Esper said. “The United States’ commitment to the role today is the same one we made to the freedom-loving people of the world in 1941 — that we will remain ready to fight any foe and defend any friend.”

The U.S. entered the war after Japanese warplanes attacked Pearl Harbor on Dec. 7, 1941. Thousands of service members were killed and wounded, about half of them dying on the USS Arizona, which still sits submerged in Pearl Harbor next to the USS Missouri Memorial, a floating museum. 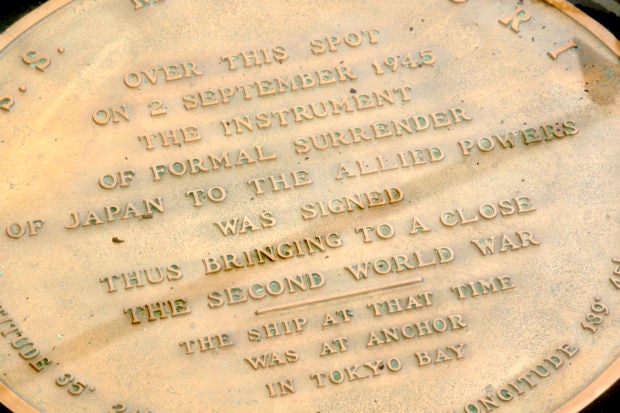 In this Aug. 11, 2020, file photo, a plaque marks the spot where World War II surrender documents were signed on the USS Missouri Memorial in Pearl Harbor, Hawaii. A Pearl Harbor ceremony in Hawaii marking the 75th anniversary of World War II will only feature veterans living in Hawaii after organizers limited those who can attend over coronavirus concerns. The plan had been to allow about 200 people, mostly WWII veterans, their families, and government officials, to gather on the battleship USS Missouri, which hosted the Japanese surrender on Sept. 2, 1945, in Tokyo Bay. (AP Photo/Caleb Jones, File)

Four years later, after massive losses on both sides that included the dropping of atomic bombs on Hiroshima and Nagasaki, the Japanese indicated they would surrender on Aug. 15, then met with Allied forces aboard Missouri on Sept. 2 to sign the Instrument of Surrender.

Hawaii Gov. David Ige said the country can learn from WWII veterans about targeting the problems of our time.

“Some compare fighting a pandemic akin to fighting a global war,” Ige said. “What I do know is that we cannot go wrong in following their example in the face of any adversity. Their courage under fire, strength of character, resilience over time provides a clear road map for us to follow in all that we do, whether we are fighting a social injustice or a virus.”