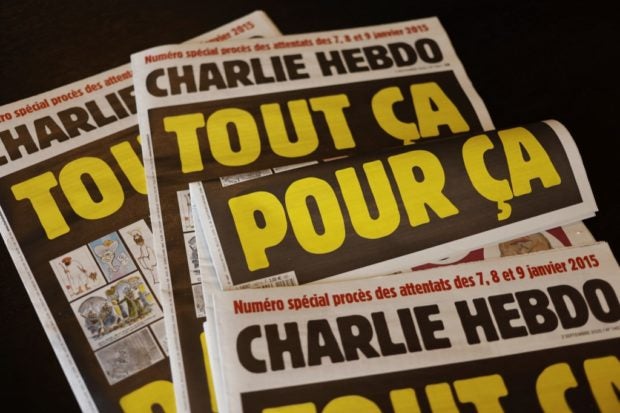 This picture taken on September 1, 2020 in Paris shows covers of French satirical weekly Charlie Hebdo reading “All of this, just for that,” to be published on September 2 to mark this week’s start of the trial for 14 accused in January 2015 jihadist attacks in Paris. Twelve people, including some of France’s most celebrated cartoonists, were killed on January 7, 2015, when brothers Said and Cherif Kouachi went on a gun rampage at the paper’s offices. Photo by AFP

PARIS — French satirical weekly Charlie Hebdo, the target of a massacre by Islamist gunmen in 2015, said Tuesday it was republishing hugely controversial cartoons of the Prophet Mohammed to mark this week’s start of the trial of alleged accomplices to the attack.

The cover of Wednesday’s new issue has a dozen cartoons mocking the prophet of Islam, reproducing images that sparked protests when first published and a debate about the limits of freedom of speech.

“We will never lie down. We will never give up,” director Laurent “Riss” Sourisseau wrote in an accompanying editorial.

“The hatred that struck us is still there and, since 2015, it has taken the time to mutate, to change its appearance, to go unnoticed and to quietly continue its ruthless crusade,” he said.

Twelve people, including some of France’s most celebrated cartoonists, were killed on January 7, 2015, when brothers Said and Cherif Kouachi went on a gun rampage at the paper’s offices in Paris.

The perpetrators were killed in the wake of the massacre but 14 alleged accomplices in the attacks, which also targeted a Jewish supermarket, go on trial in Paris Wednesday.

The latest Charlie Hebdo cover shows a dozen cartoons first published by the Danish daily Jyllands-Posten in 2005 — and then reprinted by the French weekly in 2006, provoking outrage across the Muslim world.

In the center of the cover is a cartoon of the prophet drawn by cartoonist Jean Cabut, known as Cabu, one of those killed in the massacre.

“All of this, just for that,” the front-page headline says.

The issue will be available from French newstands just as the trial gets underway Wednesday morning and can already be read by subscribers online.

‘The right to blaspheme’

The editorial team wrote that now was the right time to republish the cartoons and “essential” as the trial opens.

“We have often been asked since January 2015 to print other caricatures of Mohammed,” it said.

“We have always refused to do so, not because it is prohibited — the law allows us to do so — but because there was a need for a good reason to do it, a reason which has meaning and which brings something to the debate.”

The paper’s willingness to cause offence over a range of controversial issues has made it a champion of free speech for many in France, while others argue it has crossed a line too often.

But the massacre united the country in grief, with the slogan #JeSuisCharlie (I Am Charlie) going viral.

The former director of Charlie Hebdo, Philippe Val, hailed their decision as a “remarkable idea” for defending freedom of thought and expression in the face of “terror.”

The president of the French Council of Muslim Worship (CFCM), Mohammed Moussaoui, urged people to “ignore” the cartoons, while condemning violence.

“The freedom to caricature is guaranteed for all, the freedom to love or not to love (the caricatures) as well. Nothing can justify violence,” he told AFP.

Pakistan’s foreign ministry condemned the republication of the cartoons as “deeply offensive”.

“Such a deliberate act to offend the sentiments of billions of Muslims cannot be justified as an exercise in press freedom or freedom of expression,” said a ministry statement.

French President Emmanuel Macron, speaking from the Lebanese capital Beirut, paid tribute to the victims of the attack on Charlie Hebdo and defended the “freedom to blaspheme” and criticise in France.

He added it is not up to a French president to weigh in on editorial decisions.

But he said that “with freedom of expression comes the duty to not have hate speech,” referring to social media and not Charlie Hebdo’s caricatures.

The suspects, who go on trial from 0800 GMT on Wednesday, are accused of providing various degrees of logistical support to the killers.

The trial had been delayed several months with most French courtrooms closed over the coronavirus epidemic.

The court in Paris will sit until November 10 and, in a first for a terror trial, proceedings will be filmed for archival purposes given public interest.

National anti-terror prosecutor Jean-Francois Ricard dismissed the idea that it was just “little helpers” going on trial since the three gunmen were now dead.

“It is about individuals who are involved in the logistics, the preparation of the events, who provided means of financing, operational material, weapons, a residence,” he told France Info radio on Monday.