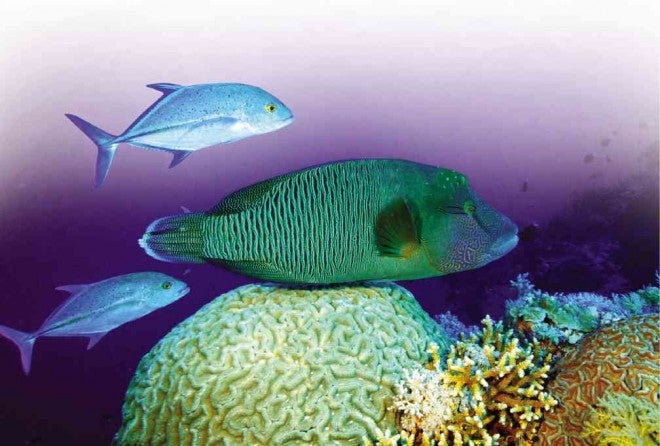 THE TUBBATAHA Reefs Natural Park is one of the few areas in the world where the Napoleon wrasse, locally known as “mameng,” thrives without the risk of overfishing. The Convention on International Trade in Endangered Species of Wild Fauna and Flora penalizes the catching or possession of mameng. YVETTE LEE/CONTRIBUTOR

MANILA, Philippines — The multimedia travel guidebook company Lonely Planet has cited several Philippine diving areas as among the “most surprisingly spectacular” in the world.

An article on the Lonely Planet website published last week named the Tubbataha Reefs National Park and Puerto Princesa City diving spots in Palawan, and Moalboal in Cebu as among “gems to be found underwater around the globe.”

Tubbataha, a Unesco World Heritage Site, and Puerto Princesa dive sites such as Amos Rock, Washing Machine and Black Rock were cited for their “incredible diversity” in terms of corals, sharks, dolphins, whales, manta rays, barracudas, nudibranchs, seahorses and other fish species that are found there.

Moalboal earned praise for its world-renowned “sardine run,” found on the Pescador Island marine park, featuring a large school of sardines, often numbering in the millions, that found sanctuary on a reef, attracting various sorts of bigger predatory fish species.

The article was written by American travel writer and photographer Angela Ballard, who, together with her husband Michael, are behind the popular We Married Adventure travel blog where they describe in detail their visits to more than 100 countries across six continents.

Other dive spots on Ballard’s list are found in Kenya, Greece, Iceland, the Dutch Caribbean island of Bonaire, and Tanzania’s Zanzibar archipelago.