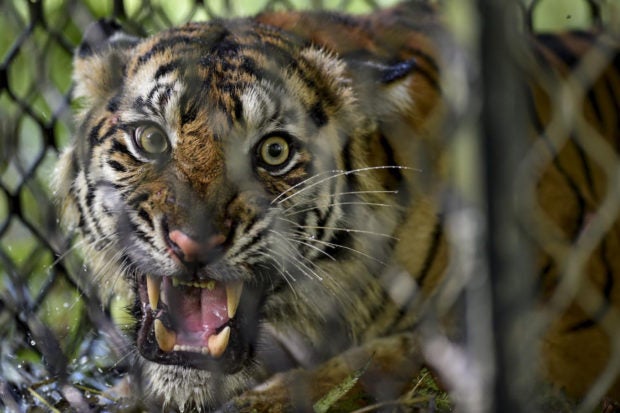 A female Sumatran tiger inside a cage before being released into the wild in the Leuser ecosystem forest in the southern Aceh province on Aug. 19. AFP/Chaideer Mahyuddin via The Jakarta Post/Asia News Network

The 3-year-old animal was captured on Aug. 22 by the BKSDA team as it kept preying on villagers’ livestock.

The tigress’ latest attack was on Aug. 15 when it caught a resident’s goat, BKSDA head Hotmauli Sianturi said.

He added that the tigress was weak when captured and suffering from dehydration and anemia.

“The animal was malnourished. It only weighs 45.2 kilograms while the normal weight for a 3-year-old tiger is around 60 kg,” Hotmauli said during a press conference at the North Sumatra BKSDA office on Monday.

The Sumatran tiger has been running out of food in their habitats due to continuous illegal logging and plantation development, causing an increase in human-tiger conflicts.

To make things worse, the tiger’s population has been shrinking due to illegal hunting, Hotmauli said.

Only 33 Sumatran tigers are left in North Sumatra, from a total population of 400 to 600 on the entire island of Sumatra, according to official estimates.

The Sumatran tiger is actually the only surviving species of the Sunda Islands tigers that once included the now-extinct Bali tiger and Javan tiger. It has been listed as critically endangered on the International Union for Conservation of Nature (IUCN) Red List since 2008.