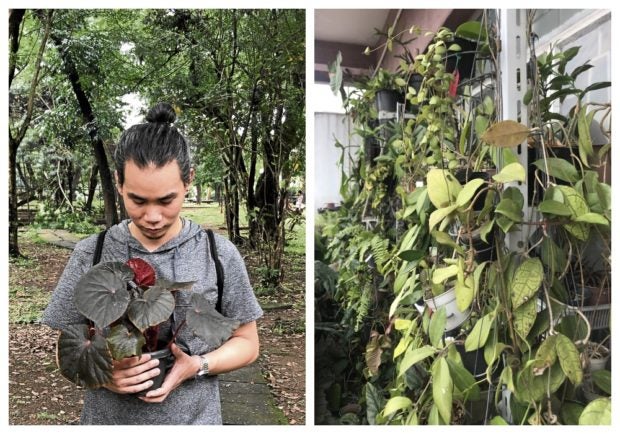 FRESH GREEN SPOT Aris Trinidad, who goes by the name Plantrippy, got his Begonia U497 for P300. The plant now costs three to four times that amount. Right photo shows a view of Trinidad’s balcony. —PHOTOS COURTESY OF PLANTRIPPY

MANILA, Philippines — Aris John Trinidad discovered his green thumb in 2017. As a means to destress, he started caring for herbs and succulents, until he eventually tended to variations of cacti, and then ornamental and tropical plants.

Three years later, Trinidad has amassed more than 200 potted plants in his apartment and has transformed his abode into a fresh green spot in a concrete jungle.

For him, it is a therapeutic hobby.

That has been the case for a lot of people now.

Plant aficionados like Trinidad used to be outliers, but the pandemic has turned a lot of Filipinos to try home gardening.

To cope with the varied lockdowns in the country that forced people to stay home for the past six months, a new wave of “plantitos” and “plantitas”—or people between the age of 22 and 38 who have turned to gardening—have kept themselves busy by caring for plants and finding new ornamentals for their collection.

But these quarantine trinkets have also given rise to irregularities in what was formerly a niche community of gardeners, with prices of plants being jacked up by as much as 3,000 percent, and with plant sellers reporting cases of theft.

Worse, conservationists have sounded the alarm as cases of poaching wild plants have begun to rise.

Trinidad, who is also behind the YouTube channel Plantrippy, said “prices [of plants] are steadily increasing since the pandemic. It is shocking.”

It is easy to link the exorbitant markups to the surging number of plant lovers. But according to Amor Alcantara, owner of garden store Ms. Potts and Plants in Rizal, some have taken advantage of the situation as a way to rake in more money in this uncertain time.

“Suppliers would jack up the prices to any amount they want so long as people are willing to buy them. Other sellers even label their plants as ‘rare’ even though they did not nurture the plants and [these] were actually illegally [taken from] the mountains,” she said.

The irregular pricing is not limited to plants. Alcantara said even pots and other implements for gardening are now being sold at three to five times their prepandemic prices. This has forced her to stop buying clay pots for the meantime, while others have resorted to using plastic pots instead.

The craze for botanical ornaments has been so intense that last month, P9,000 worth of dwarf anthuriums were stolen from Alcantara’s garage. The incident has been caught on closed-circuit television.

Jean Ferry, a plant collector since 2016 who is behind the famous Instagram account @flora_filipina, has also heard similar horror stories from her followers and friends.

In an email exchange, Ferry said there were instances when someone has bought a one-leafed hoya that never took root and a pot of philodendron that never grew because there were hardly any roots.

She said “Since the pandemic, I have seen the prices of plants increase while the sizes of the plants on offer have generally gotten smaller … In 2017, you can get a full pot of Epipremnum aureum N’joy, for P50. Now, I’ve seen a tiny pot with about five leaves going for P300 and up. I bought my three-stalked small Zamioculcas zamlifolia (ZZ) Raven in 2018 for P150 and I was told that a one-stalked ZZ Raven is now going for at least P4,000. I bought my Anthurium clarinervium for P500 and I was told that a pot was being offered for P18,000 now.”

Ferry said she also received a screenshot of a Facebook post from a person in Surigao del Norte showing supposedly wild alocasias being sold in the market that were allegedly poached.

Ricardo Calderon, director of the Department of Environment and Natural Resources’ Biodiversity Management Bureau, said his office also noticed a rise in the number of reports of plant poaching since the COVID-19 contagion began.

He pointed out that in most cases, these poachers were migrants from Metro Manila who decided to return to the provinces to evade the pandemic.

Others are members of indigenous communities who can barely make ends meet. With fewer job opportunities, some resort to selling wild plants to make a quick buck.

“We get a lot of reports through Facebook. Most are pitcher plants and bantigue trees that are being turned into bonsai. A lot of them are in the coastal areas of Aurora, in the Sierra Madre. These are very expensive and are well-loved by bonsai enthusiasts,” Calderon said.

He expressed concern that “very rare” orchids in the wild might be the next targets for poachers. Orchids are considered one of the most expensive plants because they are difficult to find.

While owning wild varieties of flora can be exciting for home gardeners, this has serious implications.

“The potential extinction of flowering ornamentals like orchids, hoyas, medinillas, tayabak and many others can have consequences as they often support pollinator species that can’t live without them,” said Gawayn Coronel, an agriculture student at the University of the Philippines Los Baños and a member of Youth Advocates for Climate Action Philippines (Yacap).

Coronel said, “Ornamentals have different ecological roles from providing food … [to] habitats for animals … [R]emoving a species from a forest can result in a chain reaction of lowered population of pollinators.”

Under the Wildlife Resources Conservation and Protection Act, poachers face a jail term and fine. But according to Calderon, no one has been charged since the pandemic began.

Without proper propagation of these plants and the government’s dwindling manpower in monitoring human activity in the country’s forests, the rise of ornamental agriculture could further accelerate the destruction of the country’s wildlife.

For Ernie Lito Bollosa, agriculturist at the Bureau of Plant Industry, this could be an opportunity to develop the country’s ornamental agriculture industry. But the government has yet to keep up with the changing commercial demand.

“We have no guidelines, so to speak,” he said. “What we can do is accredit interested individuals or enterprises who would like to be taught how to properly identify and care for their plants. We conduct seminars for free. We can give them mother plants to propagate a certain species. We also offer loans. We want to uplift the industry … but we cannot force them to sign up.”

Plant enthusiasts remain divided whether there is now a need for the government to impose regulations, at least on the prices of these plants.

“I do not think the government should regulate the industry to address issues on pricing and false advertising,” Ferry said. “Once the pandemic is over, I believe the supply of plants will stabilize because it will be easier to import plants from outside the country and to bring in plants from Mindanao to Metro Manila. Once the frenzy of plant buying has calmed down, buyers will be more discriminating and will have more choices on where to buy their plants. The market can self-regulate.”

Trade Undersecretary Ruth Castelo said the Department of Trade and Industry had no plans to implement a price scheme for ornamental plants, adding that “it is neither a basic nor a prime commodity for survival.”

Nevertheless, plantitos and plantitas, it seems, are still willing to pay for the runaway prices of these plants.

Gizelle Octaviano, for one, has already spent P20,000 on plants since the pandemic began.

“It gives my husband and me a quick mental break from the pandemic,” she said. “Tending to our plants brings us joy. That is something you really cannot pay for.”