Reeling from pandemic, Baguio starts crawling out of economic crisis 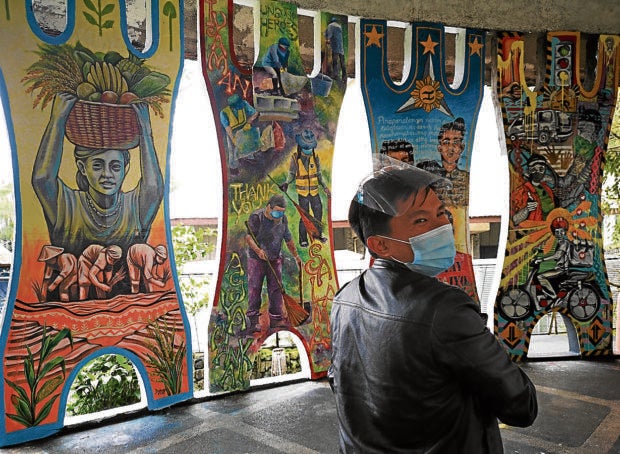 FRONTLINERS Cordillera shields adorning a stage at Sunshine Park in Baguio are painted with murals depicting the city’s unsung heroes and front-liners in the battle against COVID-19. —EVESPIRITU

BAGUIO CITY, Benguet, Philippines — Twenty horses were rented by the Baguio City police for a small parade on Aug. 24 when it staged a flag-raising ceremony at Wright Park here.

That was the first time Baguio’s “pony boys” got paid since the coronavirus pandemic forced the Luzon lockdown in March, said Simber Serong, 50, who had made a living renting out his horses to riding enthusiasts and tourists for two decades.

The pony boys’ business is how Serong’s trade has been called. It is an informal enterprise began by Ibaloy clans, which has grown into 10 associations of riders that take care of about 200 horses.

Like the rest of the country, Baguio was unprepared for the losses and stress brought on by the lockdown that shut businesses, kept families indoors, and prevented tourism and leisure enterprises from operating.

But Baguio folk also displayed the Filipino tenacity to skirt the crisis and dig out opportunities from this year’s bad breaks.

That willpower is being honored today, Sept. 1, when Baguio celebrates its 111th Foundation Day—not with pomp and pageantry that no longer have a place in a pandemic—but with the easing of restrictions on the road to reviving its economy.

The city government hopes to get in 2021 half of the taxes and revenue it generated last year because of the economic slowdown.

Tourism-oriented industries suffered a P1.6-billion loss when the crowd-drawing Panagbenga (Baguio Flower Festival) in February was scrapped and visitors were banned.Manufacturers and exporters at Baguio City Economic Zone were hampered by restrictions on movement, which crippled their operation. They also suffered from the sharp plunge in demand overseas.

On Saturday, Mayor Benjamin Magalong announced plans to once more relax some rules to get businesses going, but he appealed to the people to continue exercising prudence as they “forge on by learning to live with this virus.”

But residents began picking themselves up as early as March when they realized their jobs and enterprises were gone.

The initiatives were sparked by community altruism, which inspired households to launch pocket businesses.

In Barangay Dominican, two sari-sari (variety) stores were soon joined by four others put up in converted garages. In ordinary times, such a setup would not be sustainable for this type of enterprise. But because they bring food closer to their neighbors’ doorsteps, business has been brisk.

“The pony boys sat down one time in April and decided we could make a fresh start by selling compost mixed with horse manure,” he said.

In the first months of the quarantine, they suffered losses amounting to P7 million.

“Our business is not like a tricycle business where you can store your vehicle when times get tough. We need to continue feeding and tending to the health of our steeds during the worst of times,” Serong said.

Being a part of an old Ibaloy family, Mary Cois-Fernandez, 85, said she had seen public health problems that struck the country, and was convinced nothing was as bad as the coronavirus.

The city has allowed the elderly to go out on Sundays, but Fernandez said she would not take any chances. She now spends most of her time tending to her garden and learning how to use tablet computers to watch her favorite shows.

Asked how she thought the city would recover from the pandemic, Fernandez said, “Only God knows.”