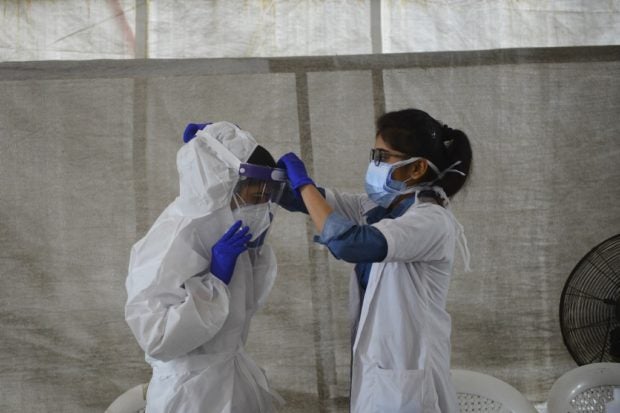 An health worker (L) is being helped by a colleague to wear a Personal Protective Equipment (PPE) as she prepares to conduct a Covid-19 coronavirus test of bus passengers at a testing camp in Sanathal, on the outskirts of Ahmedabad on August 30, 2020. India on August 30 set a coronavirus record when it reported 78,761 new infections in 24 hours — the world’s highest single-day rise — even as it continued to open up the economy. Photo by SAM PANTHAKY / AFP

NEW DELHI — India has crossed a new sombre milestone with a daily spike of 78,761 fresh coronavirus cases within a 24-hour window. This is the highest single-day jump in Covid-19 infections reported by any country since the beginning of the pandemic.

India has now recorded a total of more than 3.5 million cases, moving it closer to Brazil’s 3.8 million figure. The Latin American country, which recorded 41,350 cases on Saturday, ranks second in the list of countries affected by the virus. The United States has more than 6.1 million cases, with 42,843 fresh cases recorded on Saturday.

The three worst-hit countries continue to chalk up massive infection numbers every day, and are largely responsible for the global tally soaring past the 25 million mark yesterday as countries further tightened restrictions to try and rein in the billowing pandemic.

India, which has been recording more than 75,000 cases daily since last Thursday, instead chose to further relax its lockdown restrictions. It will allow metro services, which have remained shut since March, to resume operations from next Monday and gave the go-ahead for social functions with a maximum gathering of 100 persons from Sept 21.

“Starting metro services is a huge risk given the spikes we have recorded,” said Dr M.C. Misra, the former director of the All India Institute of Medical Sciences, a top government hospital in Delhi.

“Social gatherings should have been avoided because of the large number of asymptomatic individuals who may pass it on to others,” he told The Straits Times.

There are also fears India will record more positive cases as testing rates go up. More than 1.05 million tests were conducted across the country on Saturday, the highest ever in a single day for India.

“Whatever spike we are seeing today is despite the fact that not everybody carrying the virus has been tested. The number of actual infections could be double, triple or 10 times,” Dr Misra added, referring to recent sero-surveys that indicate widespread asymptomatic infections in some Indian cities such as Mumbai and Delhi. A sero-survey is conducted by testing blood serum drawn from a sample of people in a community to detect antibodies.

Despite the worrying spread of the pandemic that has engulfed even India’s rural areas, government officials have highlighted the falling fatality rate – currently at 1.79 per cent of all cases – as well as the present recovery rate of 76.61 per cent to defend their handling of the situation.

An Agence France-Presse report has said that a million additional cases have been detected globally roughly every four days since the middle of last month, with countries such as New Zealand and South Korea that had brought their outbreaks largely under control now battling new clusters.

The report added that masks will be mandatory from today on public transport and flights in New Zealand.

While the number of daily new cases in South Korea fell below 300 yesterday for the first time in five days, the Yonhap news agency said the number of daily virus cases has remained in the triple digits for more than two weeks, and may rise again as new clusters have been emerging in recent days.

Tougher social distancing measures have been extended in the greater Seoul area for one more week and curbs imposed on restaurants, bakeries and franchise coffee chains in the region.

Meanwhile, today marks the cut-off date for countries to submit their expression of interest to participate in the World Health Organisation’s global Covax initiative that seeks to ensure a Covid-19 vaccine is available worldwide to both higher-income and lower-income countries.

It aims to offer two billion vaccine doses by the end of next year equally to all participating countries. But it has struggled to find full support from some of the more wealthy countries. The US, Britain, Japan and the European Union have struck their own deals to secure access to a vaccine.