Israel responds to explosive balloons with tank fire on Gaza 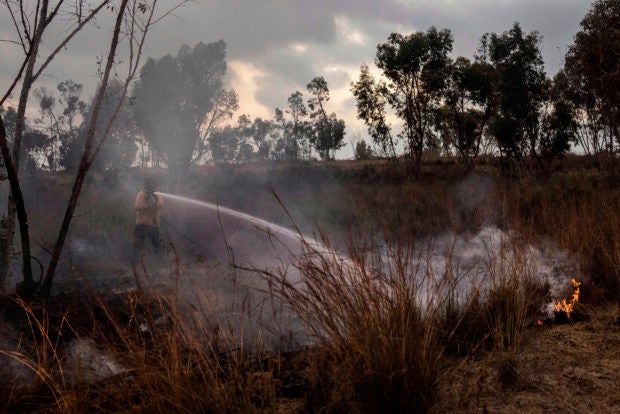 An Israeli firefighter attempts to extinguish a fire caused by an incendiary balloon on the Israeli side of the border between Israel and Gaza Strip, Sunday, Aug. 30, 2020. (AP Photo/Tsafrir Abayov)

JERUSALEM — The Israeli military said it struck militant targets in Gaza early on Sunday in response to continued launches of explosives-laden balloons out of the Hamas-run territory.

There were no immediate reports of casualties on either side. But the violence comes at a time when Gaza is struggling with a worsening economic crisis and a new outbreak of the coronavirus.

Hamas-linked groups have launched a wave of incendiary balloons into Israel in recent weeks, torching wide swaths of farmland. Israel has responded with airstrikes and other attacks. The army said Sunday’s tank fire struck Hamas “military posts” in southern Gaza, without elaborating.

In response to the recent attacks, Israel closed Gaza’s sole commercial crossing, forcing its only power station to shut down for lack of fuel and leaving Gazans with just a few hours of electricity a day. Israel has also closed the coastal territory’s fishing zone.

Hamas is pressing Israel to ease its blockade on Gaza and allow large-scale development projects. Egypt and Qatar are trying to shore up an informal cease-fire.

Those efforts have grown more urgent in recent days as authorities in Gaza have detected the first cases of local transmission of the coronavirus.

Hamas has imposed a lockdown in the coastal territory bordering Israel and Egypt, which is home to 2 million Palestinians.

Israel and Egypt imposed a blockade on Gaza after Hamas seized power from rival Palestinian forces in 2007. Israel says the blockade is needed to keep Hamas from building up its arsenal, but critics view it as a form of collective punishment.

Israel and Hamas have fought three wars and several smaller battles since the closure was imposed.

The restrictions have pushed the local economy to the brink of collapse, and years of war and isolation have left the health care system ill-equipped to cope with a major outbreak.

Read Next
United says it will drop widely scorned ticket-change fees
EDITORS' PICK
Joe Biden sworn in as 46th U.S. president
New Year, New Rediscoveries
Biden’s inaugural address: Democracy, truth and Covid
Is your company a growth champion? Stand up and be recognized!
Dacera case: Sinas orders relief of Makati’s top cop, medicolegal officer
Acer Philippines welcomes you to its first flagship store
MOST READ
Makati Shangri-La to close its doors temporarily starting Feb. 1
A shade at Roque? Vice asserts being a comedian, not a clown
Merger of BPI, BPI Family set in motion
Graft complaint filed vs Diokno, other BSP execs for P1.75-B contract for IDs
Don't miss out on the latest news and information.