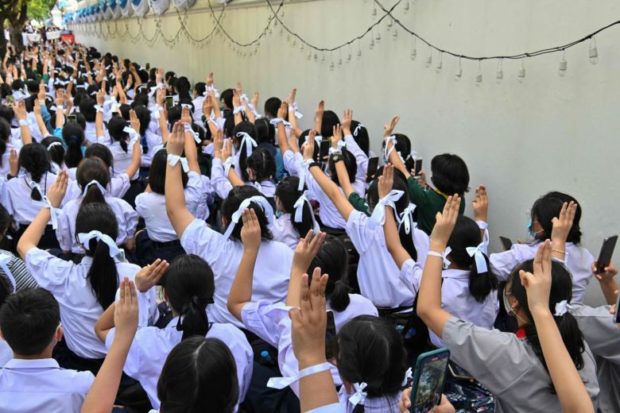 Students salute and wear knotted white ribbons as they take part in a protest in front of Bangkok’s Education Ministry on Aug 19, 2020. AFP via The Straits Times/Asia News Network

Holding a cordless microphone connected to a loudspeaker, he serenaded a row of mask-wearing policemen who were keeping protesters away from 15 activists who were inside the station hearing charges for their anti-government protests.

The crowd outside kept vigil until those charged were released.

A week before, Bangkok’s skytrain stations went mysteriously silent at 6pm, when all commuters usually stand at attention for the national anthem. That was the day a tweet surfaced asking commuters to flash a three-finger salute during the anthem – a trademark of the nationwide youth-driven protests.

Alarmed at the wave of students doing this salute during morning assemblies, the director of a private school in Bangkok banned political expression on campus. The girls turned up anyway with schoolbags knotted with white ribbons – another symbol of the movement.

The defiance has been contagious. One year after an election re-installed leaders of the 2014 military coup, Thailand is seeing a swell of protests from people demanding the democracy they felt robbed of.

At least 60 protests have sprung up since May after restrictions to curb the pandemic were eased, according to the monitoring website Mob Data Thailand. They were held mostly in Bangkok but also as far as Chiang Mai, Pattani, Khon Kaen and Kanchanaburi provinces.

Loosely structured, mobilized swiftly with trending hashtags and often livestreamed, the protests have latched onto public disillusion about an economy projected to shrink by 8.1 per cent this year.

Protesters have mustered both flash mobs and hours-long extravaganzas, but stayed away from the protracted sit-ins that paralyzed Bangkok in Thailand’s turbulent past. Along the way, groups allied with the movement have injected their causes in its slipstream: Labor and gay rights, school reform and – more contentiously – monarchy reform.

Prime Minister Prayut Chan-o-cha warned on Wednesday that the nation would be “engulfed in flames” if the students go too far.

But government spokesman Anucha Burapachaisri says it is not dismissing their demands. “We are thinking of doing something but we want to do it the proper way,” he told The Straits Times. “Because there are so many groups, we have to identify what each is asking for.”

Ask Mr Tattep Ruangprapaikitseree, the 23-year-old secretary-general of the main protest organising group Free People, and he would say it’s all quite simple.

Free People demands the government stop harassing its critics, amend the military-backed Constitution and dissolve the House of Representatives for fresh elections. It also has what it calls a “dream” of a democracy with the monarch under the Constitution.

The carefully worded statement has put the spotlight on King Maha Vajiralongkorn, who since ascending the throne in 2016 has taken personal control of the multi-billion-dollar assets of the Crown Property Bureau and two army units.

Groups allied with Free People support its three basic demands, said the baby-faced Mr Tattep. “You can demand many things, but whatever problems you have – be they related to the environment, the military or the monarchy – they can only be solved by first unlocking the Constitution.”

“I initially wanted to live the midde-class dream, find a good job and have a good life,” he told ST in between sips of chocolate frappe at a Bangkok cafe.

“But my partner said we can hardly achieve this dream under the current power structure,” he said, shifting closer to his partner and fellow protest organiser Panumas Singprom in the next chair.

Generation Z, having come of age under a royalist military government that leaned on the country’s oligopolistic conglomerates, blame their bleak future on the state of Thai politics.

They are frustrated about the longstanding political and economic suppression, said Mr Tattep. “They cannot see what their future will be like. That’s why they have come out.”

Amid the pandemic-induced austerity, which forced the government to cut each agency’s budget by 10 per cent, even once taboo subjects have gained traction.

On Aug 10, before a crowd of thousands at Thammasat University in Pathum Thani province, 22-year-old sociology and anthropology student Panusaya Sithijirawattanakul read out a list of 10 demands for monarchy reform. It included reducing the budget allocated to the palace according to economic conditions and ceasing publicity that praised the monarchy excessively.

The uproar it caused among royalists forced the deputy rector of Thammasat University to apologise. But it proved impossible to put the genie back in the bottle.

A week or so later, 21-year-old Jutatip Sirikhan, president of the Student Union of Thailand, went on stage at a labour rights event in Pathum Thani to try to suggest that the budget for the palace should be redirected to social security. Guards hired by the protest organizers themselves tried to bundle her off stage.

Not everybody agrees: Outgoing army chief Apirat Kongsompong has alluded to the protesters as “nation haters”.

Mr Anucha says legislators are drafting amendments to the Constitution which will be forwarded to the Speaker this coming week. But he declined to comment when asked about monarchy reform: “We have to be very careful about how to proceed.”

Thailand has a lese majeste law which punishes those who insult or defame the monarchy with up to 15 years in jail. While this has not been used against the protesters yet, several activists, including Mr Arnon, Mr Tattep and popular underground rapper Dechathorn Bamrungmuang, have been charged with sedition and other offences.

Anti-monarchy activists in recent years have met grimmer fates. Last year, the bodies of two such exiles washed up on the banks of the Mekong River. They had been disembowelled and stuffed with concrete.

Asked about the possible dangers ahead, Ms Panusaya, the leader of a group called United Front of Thammasat and Demonstration, told the ST: “I’m prepared. I’ve told my colleagues what to do if I die, and how they can contact my family.”

Critics allege the protests are backed by a third party. Students say they are funded by huge sales of T-shirts and public donations.

Free People will disband when Thailand achieves true democracy, says Mr Tattep. But the journey will likely be long.

In the meantime, activists have been briefing foreign diplomats.

A viral anti-dictatorship rap released in 2018 called Prathet Ku Mee, roughly translated to “My country’s got”, has become an anthem of sorts for the disaffected. According to Mr Dechathorn, a new rap will soon be introduced.

Ms Panusaya says she will not leave politics: “I have been talking to my friends, and we may start a political party. Regardless of whether we are inside the political system or outside it, we will fight.”

Her group will hold another rally at the Bangkok campus of Thammasat University on Sept 19 while a high school group called Bad Student, which shared the stage at a recent Free People protest, will hold a demonstration at the Ministry of Education in Bangkok on Sept 5.