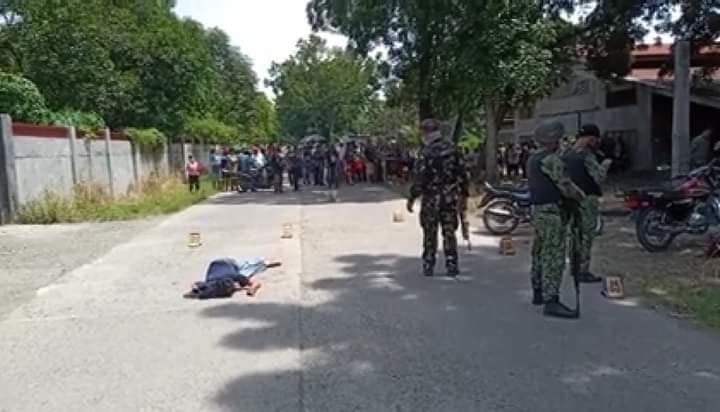 A shooting victim is sprawled on the road in Kabacan town of Cotabato province. Photo courtesy of Radio DXND-AM in Kidapawan City

The victims, all males, were standing on the side of the Aringgay Road near University of Southern Mindanao compound when gunmen on a motorbike drove by and opened fire.

Another victim was critically injured and is now confined in a hospital.

Citing witnesses, Saratao said one of the victims managed to return fire but was overpowered.

Police are looking at the possibility the shooting was triggered by a rido or family feud.

Read Next
Duque: Going back to stricter lockdown will ‘damage PH economy beyond repair’
EDITORS' PICK
New Year, New Rediscoveries
Acer Philippines welcomes you to its first flagship store
Is your company a growth champion? Stand up and be recognized!
4 senators want military, cops off UP campuses
PUP accord with DND also faces termination
Joe Biden sworn in as 46th U.S. president, urges end to ‘uncivil war’
MOST READ
Trump’s parting gifts to Biden: Roaring stocks, a weaker dollar, tons of debt
Biden says Trump wrote him ‘very generous letter’
A shade at Roque? Vice asserts being a comedian, not a clown
Dacera case: Sinas orders relief of Makati’s top cop, medicolegal officer
Don't miss out on the latest news and information.