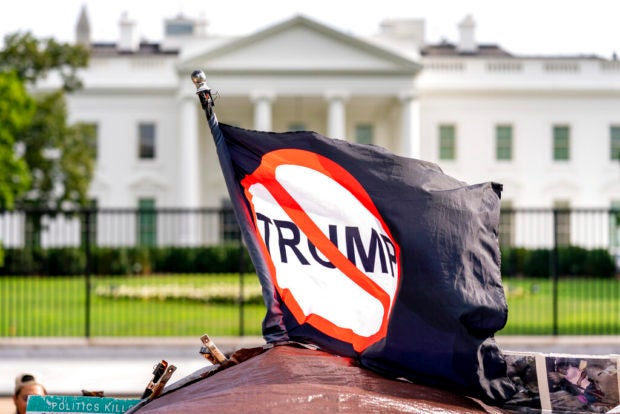 An anti President Donald Trump flag is visible in Lafayette Square outside the White House on the fourth night of the Republican National Convention, Thursday, Aug. 27, 2020, in Washington. (AP)

NEW YORK ss— MSNBC is making its final night of Republican convention coverage a family occasion for President Donald Trump, but not in a way that he’s likely to enjoy.

The left-leaning cable network says it will feature Trump’s niece Mary as a guest, on the night Trump brings the convention to a close by accepting the Republican nomination for another four years in the White House.

Mary Trump authored the summer bestseller, “Too Much and Never Enough: How My Family Created the World’s Most Dangerous Man.”

The Nielsen company estimated that 17.3 million people watched television coverage of the convention’s third night on Wednesday, where Vice President Mike Pence was the featured speaker.

Democrats have outdrawn Republicans on two of the three nights of the conventions.

TAGS: Book, Donald Trump, Mary Trump, msnbc, Too Much and Never Enough: How My Family Created the World's Most Dangerous Man, US Politics