Strong typhoon causes damage but no deaths in S. Korea 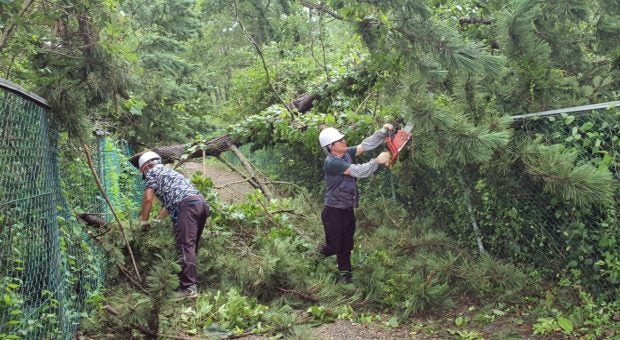 SEOUL — Damage was reported in South Korea’s southern region on Thursday after the season’s eighth Typhoon Bavi swept through the area, causing power disruptions and destroying facilities. But there was no human loss reported.

The tropical storm arrived on the Korean peninsula on Wednesday and passed through the Yellow Sea before moving northward to North Korea earlier in the day. It was moving at a speed of 46 kph over land some 50 kilometers northwest of Pyongyang at 9 a.m., according to the Korea Meteorological Administration (KMA).

The weather agency said its maximum wind speed was 32 meters per second and that its power had weakened compared with Wednesday.

Most of the damage was reported in the southern coastal area.

More than 100 facilities were destroyed, and 29 people in Gokseong, South Jeolla Province, evacuated to nearby facilities on concerns over landslides, according to the Central Disaster and Safety Countermeasure Headquarters.

Power disruptions were reported at more than 1,600 houses in the southern region, including Jeju and South Chungcheong Province.

One fish farm in the coastal town of Taean, South Chungcheong Province, reported mass deaths of flatfish due to the disruption.

Flights, ferries and trains were suspended across the country.

On Wednesday, 438 flights at 11 airports were canceled, while the runway at Incheon International Airport was suspended from 2 a.m. to 7 a.m. on Thursday.

Some 160 ferries operating on 99 routes were suspended, while trains connecting the country’s southern regions were also put on hold in precautionary measure.

More than 1,400 rescue and fire workers were mobilized to fix damage and take safety measures.

Typhoon advisories that had been issued across the country have all been lifted.

But the KMA forecast showers in Seoul and the provinces of Gyeonggi and Gangwon during the day and heavy rains, accompanied by thunder and lightning, in parts of South and North Gyeongsang provinces.