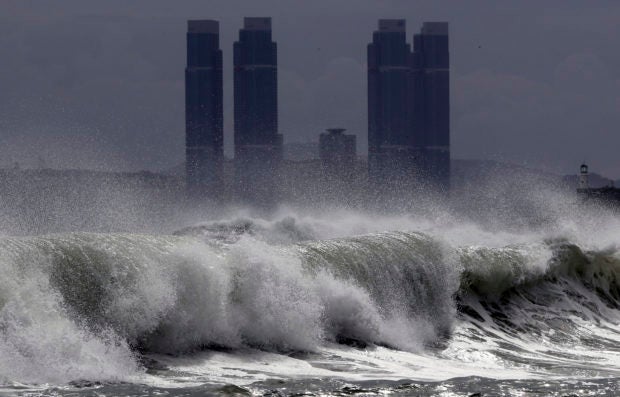 High waves crash onto Haeundae Beach in Busan, South Korea, Wednesday, Aug. 26, 2020, as Typhoon Bavi approaches the Korean Peninsula. Hundreds of flights were canceled in South Korea while North Korea’s leader expressed concern about a potential loss of lives and crops as the countries braced for a fast-approaching typhoon forecast as one of the strongest to hit their peninsula this year.(Jo Jong-ho/Yonhap via AP)

SEOUL, South Korea  — A typhoon that grazed South Korea, ripping off roofs and knocking out power to more than 1,600 households, made landfall in North Korea early Thursday.

South Korean authorities said there were no immediate reports of casualties, and North Korea has not reported any damages.

South Korea’s Ministry of the Interior and Safety said there was no immediate reports of casualties, despite damage to buildings, walls, roads and other structures. The Korea Meteorological Administration warned that strong winds will continue in the Seoul capital area and the country’s central region through the morning.

Power was knocked out in 1,633 South Korean homes, including 887 on the southern resort island of Jeju, which was the first part of the country to be hit by the typhoon on Wednesday, and more than 600 in mainland regions. By 6 a.m., power had been restored to most of the homes, but at least 96 households in the island county of Sinan remained without electricity.

More than 430 domestic flights in and out of Jeju and the southern mainland city of Busan were canceled as of Thursday morning. South Korean authorities also halted some railroad services, shut down public parks and sea bridges and moved hundreds of fishing boats and passenger vessels to safety.

Dozens of makeshift coronavirus testing stations had been dismantled in the capital Seoul and other major cities out of concerns the tents and booths would not withstand the strong winds.

North Korea’s state media did not immediately report of any damage caused by the typhoon.

The North’s official Korean Central News Agency said earlier this week that leader Kim Jong Un had called for thorough preparations to minimize casualties and damages from the typhoon.

State media said a typhoon warning was issued in most areas of North Korea, with officials moving fishing boats and applying protective measures to buildings, farms and railroads.