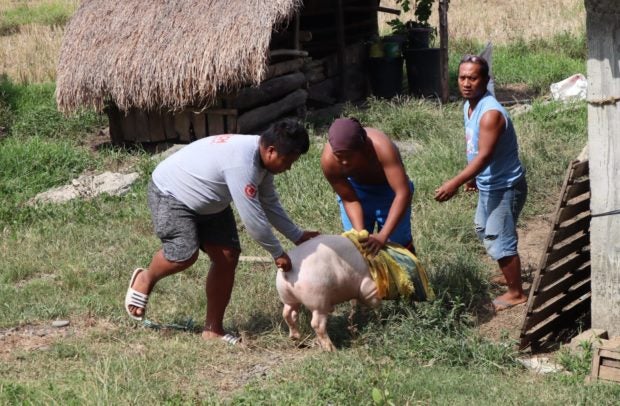 HOG TRADE A pig is prepared for weighing as traders turn to a backyard raiser in Gamu, Isabela, for their meat supply. Hog growers in Isabela have lost at least P10 million due to the African swine fever that struck farms in at least six towns starting the last week of July. —VILLAMOR VISAYA JR.

CAUAYAN CITY, Isabela, Philippines — New cases of the African swine fever (ASF) have been detected in hog farms in six towns in Isabela province since the last week of July, prompting the provincial veterinary office to order the culling of more than 1,000 pigs to contain the infestation.

Close to 180 hog raisers in the towns of Quezon, Roxas, Aurora, Luna, Ramon and San Mateo have been affected by the outbreak, according to Dr. Angelo Naui, provincial veterinarian.

In Luna alone, at least 600 hogs were culled in five villages, Naui said.

“The [swine fever] has a big effect on hog raisers but we have been continuously working to prevent the spread,” he said. Naui estimated losses of pig farms at P10 million since the outbreak.

The local government said it would provide financial assistance to the hog raisers, who were also asked to ensure biosecurity to avoid the entry of the virus causing ASF into their farms.

Checkpoints were again installed at the borders to prevent the entry of infected pigs and tainted pork products, said Gov. Rodolfo Albano III.

In February, contamination was detected in the towns of Quirino, Mallig, Roxas, San Manuel, Gamu, Cordon and Jones. Except for Cordon and Jones, these towns are near Tabuk City in Kalinga province where swine fever cases were recorded in January.

Read Next
Masbate earthquake: They saw it coming
EDITORS' PICK
52 new COVID-19 cases: Baguio’s single day record so far
Gabby’s resignation from ABS-CBN paves way for next generation Lopezes to take up new challenge
What’s happening to the ICT Industry and its role in helping businesses today
Comelec exploring possibility of holding 2022 elections for 2-3 days
Water remains our saving grace right now
More Cebu schools are now powered by Smart
MOST READ
ABS-CBN chairman Gabby Lopez resigns from network, other Lopez-owned firms
US Congress bill seeks to halt assistance to PH police, military
WATCH: Liza Soberano joins Mimiyuuuh’s ‘It Really Hurts’ dance challenge
Suspension of US security aid to PH ‘not only our loss but theirs as well’ — Lacson
Don't miss out on the latest news and information.