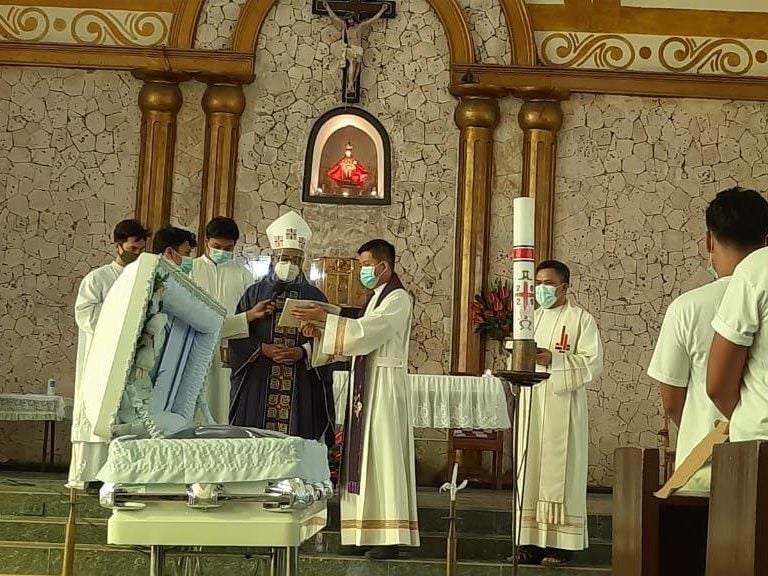 ILOILO CITY—Human rights worker Zara Alvarez was buried in her hometown Cadiz City in Negros Occidental on Wednesday, with hundreds of mourners pouring their grief into cries for justice.

It was a funeral scene becoming all too common as activists had now become targets of an increasingly indiscriminate counterinsurgency campaign.

“Your death will not be in vain. We promise Zara that we will continue what she started,” said San Carlos Bishop Gerardo Alminaza in his homily during the funeral Mass streamed live on Facebook.

More than 500 mourners, including Alvarez’s family, fellow activists and friends, attended the Mass at the Santo Niño Parish Church and the funeral march to the Cadiz City public cemetery.

They wore face masks and shields while carrying posters and streamers calling for justice for the killing of Alvarez and other activists, peasant organizers and labor leaders who had fallen in the anti-Left version of Oplan Tokhang, the controversial anti-drug strategy of the government.

A lone gunman repeatedly shot Alvarez last Aug. 17 as she was about to go home to her boarding house at the village of Mandalagan in Bacolod City.

Alvarez, 39, and an education graduate, died of multiple gunshot wounds, some in the back. The identities of her killers remained unknown and no arrest has been made nine days after her murder.

Alvarez was the research and advocacy officer of the non-government organization Negros Island Health Integrated Program and a paralegal worker of the human rights group Karapatan.

She helped document and monitor the killings of farmers, lawyers, activists and drug suspects and other human rights violations on Negros Island.

Alminaza, in his homily, recalled discussing with Alvarez last June the growing concern over the series of killings, mostly of drug suspects, in Negros just as the COVID-19 pandemic stalked communities on lockdowns.

“These systemic killings of human rights defenders and activists must be condemned and must stop,” said Alimanaza. “Our responsible agencies must pursue justice and accountability on those responsible and should never allow impunity of criminals doing senseless executions of Filipinos,” he said.

Karapatan, a human rights group that had fallen victim to Red-tagging, is investigating the killing of Alvarez.

The group said investigators “should first look into state forces and their complicity and involvement—precisely because of the pattern of threats and vilification she and other slain human rights workers had been subjected to by the police and the military.”

“Today, we bury and honor Zara, a fierce and determined human rights defender, with strong indignation,” said Cristina Palabay, Karapatan secretary general, in a statement released to honor Alvarez during her burial.

“As we grieve the loss of one of our colleagues, we do not relent in our calls for justice and an independent and impartial probe on her killing,” Palabay said.

“Over the years, Zara had been at the receiving end of harassment from state forces—from trumped-up charges and imprisonment to death threats and even judicial terror-tagging—and there could be no other culprits behind this brutal and cowardly act than the fascist butchers of the state,” Palabay said.

Alvarez was also among those tagged as “terrorist” in a proscription case filed by the Department of Justice in 2018. Her name and that of several others were later removed from the list but she reported continuing to receive death threats.

Palabay said an impartial investigation should be conducted on the killing of Alvarez by “credible institutions and personalities, with known track records of support for victims of human rights violations.”

“It should ensure the participation and confidence of relatives of victims and human rights defenders,” Palabay said.

“It should provide regular public reports on the status of the investigation. Most importantly, it should remain independent from the influence of agencies or individuals who are seen as beneficiaries of such dastardly crimes,” she said.