COVID-19 castaways: Family recalls being stranded in Seychelles for 6 months

Yang Zhouhu (right) and his mother pose with their host in Seychelles. The Chinese family enjoyed a half-year bittersweet adventure in the country following the COVID-19 pandemic. [Photo by Yang Zhouhu/China Daily]

BEIJING — Yang Zhouhu’s family was eager to enjoy a relaxing Spring Festival holiday in Seychelles when they boarded a plane from Beijing in January.

He’d booked air tickets and hotels for the two-week island vacation in the Indian Ocean three months in advance.

But the 34-year-old, his mother, elder sister and 3-year-old nephew ended up stranded in Seychelles for half a year following the COVID-19 pandemic.

The outbreak in Hubei province’s capital, Wuhan, the epicenter of the epidemic in China, had just hit headlines when they left.

Days after they arrived, Chinese travel agencies suspended outbound trips, and individual travelers were encouraged to refund their bookings free of charge.

Yang’s family members are among many Chinese who got stuck overseas during the period.

Their bittersweet adventure played out on La Digue Island, which is inhabited by about 3,000 people. It’s about two hours by boat from the country’s largest island, Mahe, which hosts the capital city, Victoria.

They finally arrived in Shanghai on June 30. After a fortnight’s quarantine there, they flew to Chengdu, Sichuan province, where they have relatives, and self-isolated for a week.

Yang poses with a fish caught by the locals. Away from the hustle and bustle of the city, the Chinese family lived simple lives and cooked fresh seafood and visited beautiful beaches. [Photo by Yang Zhouhu/China Daily]

“It was a rare opportunity to be with my family 24/7 for half a year,” Yang says.

“We’ve been through all the difficulties and setbacks together, and understand one another better.”

He used to work for an internet company in Beijing but quit in 2018 to travel the world.

“My pace of life was suddenly slow, and I had to integrate into local life. It offered a new perspective. I suddenly realized that life can be so simple.”

He also took the time to learn French, and film and edit short videos of his experiences during the journey.

His mother, Zhou Subi, who celebrated her 70th birthday on the island, says she’s grateful for the help they received from the Chinese embassy, the Seychelles Tourism Board and locals.

“I’ve learned that it’s essential to keep your mind vibrant and love life deeply just like the people of Seychelles,” she says.

However, they enjoyed simple and satisfying lives away from the hustle and bustle of the city.

They cooked fresh seafood and visited beautiful beaches, where they could see giant tortoises. The rare reptiles are some of the longest-living animals on Earth. Some are believed to be over 200 years old.

Yang enjoyed water sports like diving and surfing, played with his nephew, hung out with locals and enjoyed sunsets.

At night, he gazed at starry skies, cycled or read books.

Yang’s family were the only Chinese among the over 20 inbound tourists held up on La Digue Island. Most others were from Africa and Europe.

Yang often went rock climbing and barbecued with them. He brushed up on his French by talking with people from France.

“We were in the same boat and became good friends. Now, we’re all back in our homelands,” he says. 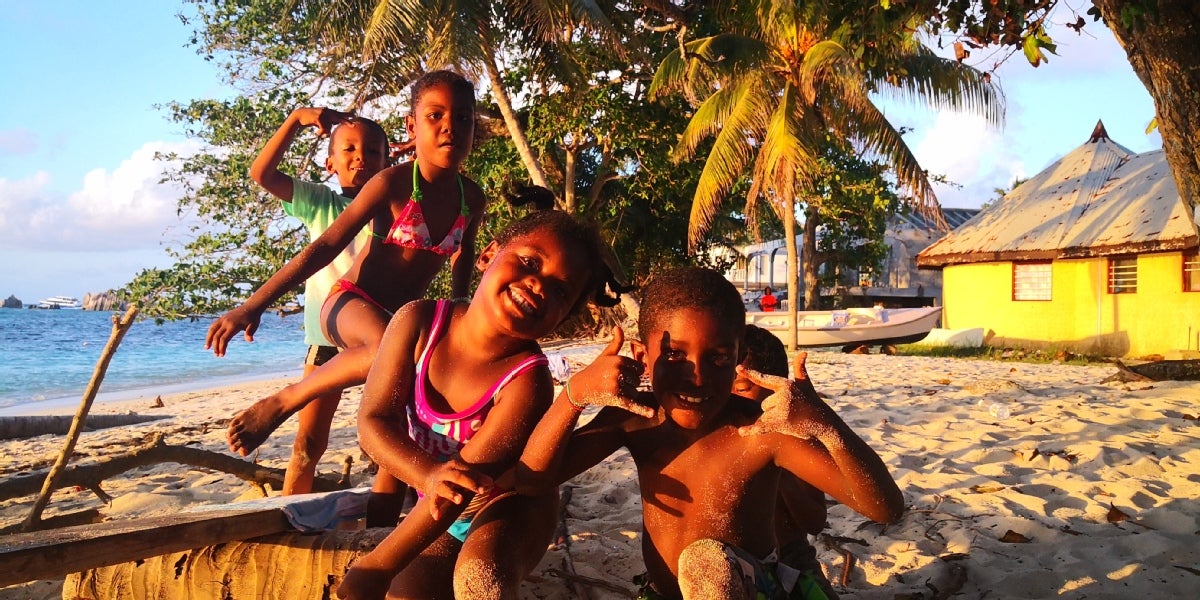 Children on a beach of La Digue Island smile at Yang while he’s taking this photo. [Photo by Yang Zhouhu/China Daily]

“La Digue Island didn’t have any COVID-19 cases. But locals knew very well that people shouldn’t lower their guard. They followed all the rules like social distancing.”

He recalled that the strictest measures were taken in April, when no more than five people were allowed inside supermarkets. A 7 pm curfew was put in place. And police patrolled the streets to ensure everyone wore face masks.

He became a local celebrity overnight after local media interviewed him about his lockdown story. Residents took photos with him, and some even gave him fruit as gifts.

“The locals are kind, optimistic and friendly. They comforted us when we were held up in the early days,” Yang says.

When his sister’s mobile phone fell in the ocean, a local made a trip to Mahe Island just to purchase a new one. And residents gave them a chicken to make soup and other food when his mother fell ill.

The Seychelles Tourism Board also invited him to livestream on the Chinese tourism website, Mafengwo, to introduce the island’s sceneries, Seychelles’ culture and his life on the island

“La Digue Island is my favorite island in Seychelles. It has various beaches to explore. It’s also good for diving, bird-watching and photography,” he says.

He says tourism is a pillar industry of the country, which is a novel destination for most Chinese. The tourism bureau plans to continue cooperating with him after his return to China.

Chinese family recalls being stranded for half a year in the island nation of Seychelles during the pandemic. The bittersweet experience changed their outlooks on life. [Photo by Yang Zhouhu/China Daily]

Yang says it was an emotional challenge, especially for his mother and elder sister, who’d never stayed overseas for such a long time. They also felt homesick occasionally and especially missed their hometown’s spicy food.

“We and our family in China were worried about one another’s safety. We felt unsettled. It was an emotional roller coaster, since we didn’t know if we could fly back to China.”

He says the Chinese embassy in Seychelles rendered timely assistance. The staff members gave them ingredients for Chinese cuisine and enough masks, and contacted them several times a week for updates on their situation.

“They collected information about all the possible flights and offered protective clothes and chocolate for our return flight,” he says.

In February, Yang was worried about his mother’s health and the risk of infection during such a long return flight. So, he got the tickets endorsed for the following month.

However, that flight was then canceled, and he was forced to bide his time.

Yang didn’t expect the pandemic would spread around the world so quickly.

Seychelles’ airport closed during the full lockdown in April. It reopened in June for noncommercial flights, such as cargo operations and passenger repatriation. That rekindled his faint hope of flying home.

Chinese family recalls being stranded for half a year in the island nation of Seychelles during the pandemic. The bittersweet experience changed their outlooks on life. [Photo by Yang Zhouhu/China Daily]

Starting from March 29, the Civil Aviation Administration of China announced that every foreign and domestic airline would maintain only one air route to China and operate no more than one flight a week.

“It was very hard to buy tickets from Ethiopia to China, as Ethiopia is an important stopover for flights from Africa, North America and Europe to China. It’s often overbooked. We were on the waiting list,” he says.

One day, he received a phone call at 3 pm, telling them that they had to catch a flight that would take off for Ethiopia two and a half hours later.

“It was incredible! We hurriedly packed all our belongings and rushed to the airport,” he recalls.

Once they disembarked, they were asked to self-isolate in a hotel while waiting for their flight to Shanghai three days later, as required by Ethiopian quarantine rules.

His mother and elder sister burst into tears of joy when the plane landed in Shanghai. And his eyes glistened, too.