Bali, closed off to foreign tourists until next year due to COVID-19, misses its 'bule' | Inquirer News
Close
menu
search

Bali, closed off to foreign tourists until next year due to COVID-19, misses its ‘bule’ 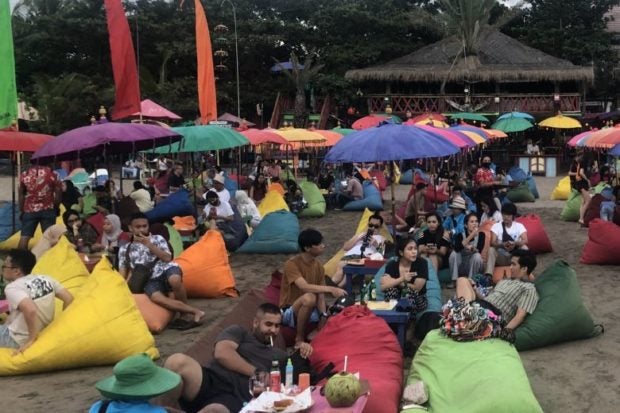 SEMINYAK, BALI — At the La Plancha restaurant, manager Evelyn Vargas has made the most of the sunset. Roughly 250 bean bag recliners are arrayed outside on a stretch of Bali’s Legian Beach – half of what she would have set up before the pandemic hit in March.

Once, the restaurant was frequented by mostly foreign clientele who would down about 300 bottles of icy Bintang at sunset alone.

But on a recent weekday evening an almost entirely domestic crowd from the rest of Muslim-majority Indonesia were toasting the end of another day in paradise with decidedly less pricey non-alcoholic beer and fruit juice.

After months of no customers at all, Ms Vargas isn’t complaining.

“You adapt or die!” the Peruvian native said.

With Covid 19 still wreaking havoc on international travel and infections still on the rise, the authorities have pushed back plans to allow foreign visitors until next year.

Last Saturday, Bali Governor Wayang Koster said in a statement that traveling to Bali is “not yet safe” for overseas visitors.

“The government is still prohibiting citizens from traveling abroad,” said Mr Wayang, who had hoped to start welcoming overseas travellers from Sept 11.

“We also cannot open the gate to international travellers until the end of 2020 as the situation in Indonesia, including Bali, is not yet safe to welcome them.”

Bali’s economy has already contracted more than 12 per cent in the three months to June, according to government data. Shutting off foreign visitors for the rest of the year will hurt like a sunburn.

Overseas travelers stay twice as long on average and spend four times as much as their Indonesian counterparts – US$145 (S$200) a day over eight days, according to Bali government data.

To be sure, foreign travelers were wary about coming to Bali before the announcement.

Mr Ketut Ardana, vice-chair of the Bali Tourism Board, who operates package tours to Bali from Asian markets under brands like “Bali Bagus” or “Namaste Bali” for Indian holidaymakers, has had no inquiries for the rest of the year.

By comparison, his business last year was shepherding a dozen or so groups each month to make the rounds of the Monkey Forest in Ubud or Uluwatu in the south.

“The pandemic is killing us,” he added.

Mr Ketut was speaking metaphorically, but Indonesia’s missteps containing the virus have weighed on Bali’s image. With roughly 4,600 cases and more than 50 deaths, Bali has the second-highest number of infections east of Java – the epicenter of the outbreak.

The virus is spreading faster in places like Jakarta, which is averaging 600 new cases a day, up from around 400 or so at the beginning of the month on a seven-day moving average.

Cruelly, the pandemic hit Bali just when hotels and restaurants were stocking up for peak season in July and August.

Ms Corryn Queenan, 28, co-owner and founder of vegan eatery Kynd was in the process of locking down her restaurant in late March for six weeks when a delivery truck pulled up to drop off 1,000 cookbooks and collect $7,000.

Subsequent online sales helped but her inventory of coffee has ballooned from one month to four owing to fewer coffee drinkers.

“September was a glimmer of light at the end of the tunnel and now that’s been taken away,” the Australian native said.

“We come here expecting to see bule,” said Mr Muhammad Fajar, 51, referring to the Indonesian term for foreigners, and pronounced as “boo-lay”. “It feels weird.”

He was holidaying from Indonesia’s second city of Surabaya and holding his five-month-old granddaughter on the beach in front of the now fenced off W Hotel.

With hotel occupancy below 10 per cent, it will be months before Bali regains that something-for-everyone vibe that has made it unique, said Mr I Made Darmika Putra, chairman of the Bali Hotel Association.

“Bali is a little UN,” Mr Ricky said, referring to the United Nations.

“The foreigners aren’t here. We feel like we lost something. We miss them.”