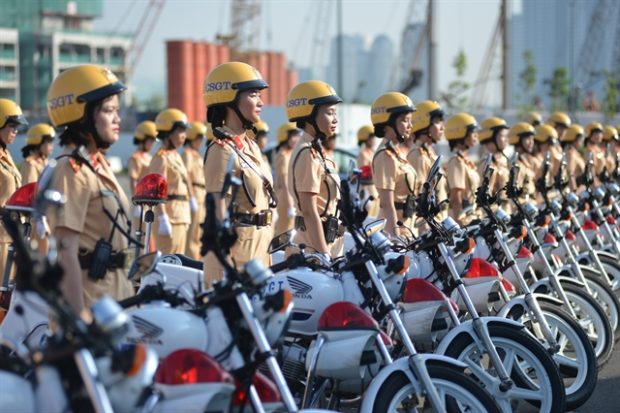 HCM CITY — Ho Chi Minh City on Tuesday debuted its first all-female police escort team, whose main mission is to lead the motorcades of the important dignitaries, domestic or foreign, through the city’s bustling traffic.

According to HCM City’s police department, the officers participating in the motorcade had undergone a stringent selection process from the leaders of their respective units, and must possess necessary moral attributes, strong political will and a high level of discipline, as well as the ability to improvise quickly according to the situation.

Fifty eight team members have received over a month of training on operating specialized vehicles, practiced simulated scenarios regarding leading motorcades, honed their observational skills and working under high pressure.

“The image of female traffic police officers on duty on the roads has demonstrated their commitment to fulfill their missions and contributed to raising law abidance among the members of the public,” Senior Lieutenant Colonel Huỳnh Trung Phong, head of HCM City’s road and rail traffic police unit, said.

Their most recent duty was leading the motorcade escorting the delegations of the Prime Minister Nguyễn Xuân Phúc and Vice Chairwoman of National Assembly Tòng Thị Phòng on August 16, and their next immediate task is to accompany the delegations participating in the city’s upcoming Party Congress.

Afterwards, other than leading and aiding in the transportation of the delegations of important Party, State leaders as well as foreign visitors visiting and working HCM City, the team will be maintained to also carry out routine inspections on the city’s roads.