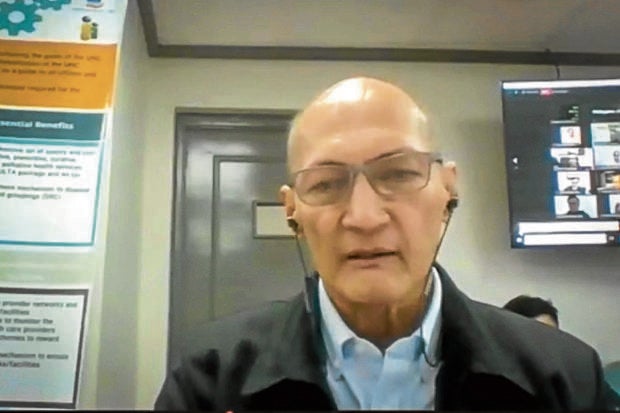 Ricardo Morales, president and CEO of PhilHealth (Photo from the Senate Public Relations and Information Bureau)

“The President took note last night of Morales’s on-and-off health situation, and stated that it would be best for the latter and for PhilHealth to give up his post during these critical times for the agency,” Guevarra said.

He said Executive Secretary Salvador Medialdea “had talked earlier to Morales, and that the latter said he would understand if he had to be replaced.”

There was no immediate comment from Morales, who had informed the Senate that he was under treatment for cancer.

The President’s move came after the Senate had concluded its latest inquiry into alleged corruption in PhilHealth, particularly those involving funds for a P2-billion information technology project and a P30-billion interim reimbursement mechanism (IRM) to hospitals that had not treated COVID-19 patients, which the emergency measure was intended for.

In a televised speech on Tuesday, the President said he would spend the rest of his years in office to prosecuting and punishing those involved in irregularities in PhilHealth.

“All must be prosecuted and jailed,” he said.

Duterte said all of the company’s procurement must be published “even if it’s just a paper clip.”

“Put it out in the newspaper for people to read. So I hope that I have made myself clear on this. More measures will come,” the President said.

Guevarra, who heads a task force probing irregularities in PhilHealth, recommended to the President to place the state-run health insurance company under an “interim management committee” because its “apparent systemic problems” would be difficult to resolve “if the people who have an interest to keep the present structure and systems will remain in their present positions.”

He said his task force had created teams composed of the National Bureau of Investigation, Commission on Audit, Anti-Money Laundering Council and the Presidential Anti-Corruption Commission to conduct lifestyle checks on certain key PhilHealth officials.

Sen. Francis Pangilinan said Duterte could show he was serious in cleaning up the agency by firing Health Secretary Francisco Duque III, PhilHealth’s chair, and jailing those behind the irresponsible use of the agency’s funds.

“While Duque is there, it is hard to believe the President is serious in eliminating corruption,” Pangilinan said.

Asked if he was hoping the President would be able to jail corrupt PhilHealth officials as promised, Sen. Richard Gordon said “the proof of the pudding is in the eating.”

On Tuesday, Gordon recommended filing corruption charges against former Aquino administration officials and several PhilHealth regional vice presidents who had been recently praised for uncovering alleged fraud in the company.

The chair of the Senate blue ribbon committee said PhilHealth’s “Mindanao Group” of regional vice presidents was the real “mafia” that had pocketed 20 percent in kickbacks from multibillion-peso rackets.

Gordon said this was among the findings of his committee’s investigation last year of the “ghost” dialysis scam and other fraudulent PhilHealth transactions, which was triggered by the Inquirer’s exposé on alleged irregularities that cost the company P154 billion since 2013.

He said the corrupt practices had turned PhilHealth into “FailHealth” as its “economic life has become fragile.”

“All these [fraud] could not have been perpetrated without their cooperation or maybe even principal leadership. There existed sufficient safeguards in the system that could have caught these criminal schemes had they performed their jobs faithfully and honestly,” Gordon said.

Except for Pamonag and Galicto, these officials temporarily stepped down last week in deference to Guevarra’s call as his task force’s investigation gathered momentum.

Gordon’s conclusions contradicted the testimonies of PhilHealth board member Alejandro Cabading and resigned antifraud legal officer Thorrsson Montes Keith, who told the recent probe of the Senate committee of the whole that the PhilHealth executive committee members operated like a syndicate.

Adre insisted that they were the ones who initiated reforms and consistently fought against “illegal orders” issued by past PhilHealth chiefs.

“We are the good mafia. We were never charged due to corruption,” Adre said in a phone interview. He said Gordon’s claims “are all false.”

Adre said he had helped Keith and former Marine Col. Etrobal Laborte, who also blew the whistle on irregularities in PhilHealth, in investigating the overpriced supply contracts and other corruption issues in PhilHealth that Morales allegedly failed to solve.

In their testimony during the Senate hearing on Aug. 11, Cabading and Keith both rejected claims that Perez, Hollero, Alonto, Macabato, Adre and Chavez were responsible for the massive corruption in PhilHealth.

“They were [called] the mafia, but in my definition they are the … modern-day heroes,” Cabading said.

Gordon proposed the immediate replacement of all PhilHealth regional vice presidents and a reorganization through a law that would ensure lasting reforms in the state insurer.

In a text message, Padilla denied Gordon’s allegations that he had diverted PhilHealth funds.

“That never happened. There was no such fund and therefore no fund diversion,” he said in a text message.

Abad said the allegations against him were “baseless,” pointing out that he was never invited by Gordon’s panel or asked to submit his position paper on the issue.

“I can only conclude that the release of this report is maliciously timed to confuse the public and distract them from the real PhilHealth scandal that Gordon should be investigating: the current PhilHealth scam that reeks of anomaly and unabashed corruption,” Abad said in a statement.

—With a report from Melvin Gascon