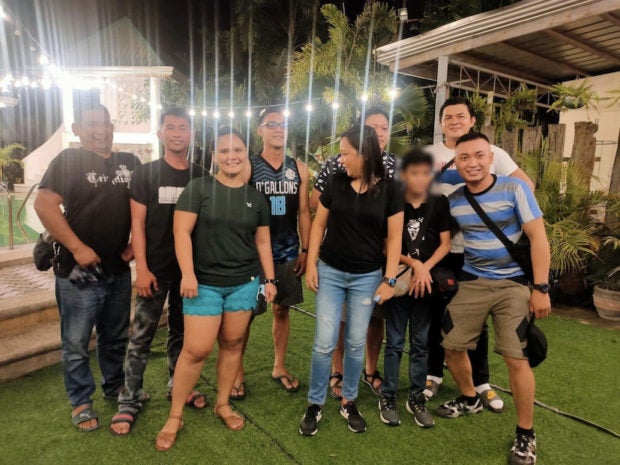 Chief Insp. Elaine Evangelista (center in black shirt and blue jeans) during what she said was a “despedida” for her.

The sender noted that the participants were not wearing face masks nor maintaining physical distancing — breaching quarantine protocols.

But Evangelista clarified in a phone interview with INQUIRER.net that the event was not a party but a “despedida,” or send-off gathering, insisting that they followed all minimum health standards and had actually asked permission from the city government to hold a small get-together.

According to her, all of those in the gathering had all tested negative for the coronavirus and they all complied with safety standards, including the provision of personal protective equipment.

“I asked permission from the monitoring team and [promised that] we will observe minimum health standards,” she added.

“And about pictures, I don’t know. We did not have any uploads or what. So I don’t know what purpose was for sending such texts to reporters,” she said.

Two sets of photos sent to reporters showed Evangelista, wearing a black shirt, standing beside several individuals who were supposedly not wearing face masks and were too close to each other.

At least two photos showed different individuals holding on to their face masks — removed before photos by the poolside.

Evangelista said they could not wear face masks all the time.

“We had face masks. But then how would we eat? We were going to eat. It wouldn’t be possible if we were still wearing face masks,” she said. “And we observed social distancing. Even in the pool area, there were chairs that really separated all of us.”

“We follow rules, especially since we are the most active government agency here in Batangas City. The monitoring team knows that every day we go out to reprimand people not following protocols,” she went on.

Batangas City, as part of the Batangas province, is currently under a general community quarantine (GCQ), the second-to-the-lowest form of quarantine restriction placed by the national government.

Guidelines released by the Inter-agency Task Force on Emerging Infectious Diseases (IATF) showed that mass gatherings — including, but not limited to, “movie screenings, concerts, sporting events, and other entertainment activities, community assemblies, religious gatherings, and non-essential work gatherings” are prohibited under GCQ.

INQUIRER.net contacted various officials of the BFP and Department of the Interior and Local Government for their comments on the issue, but they had not replied as of this writing.

Previously, netizens also condemned a supposed birthday party thrown for Maj. Gen. Debold Sinas, the chief of the National Capital Region Police Office (NCRPO). Sinas insisted that there was going to be a gathering for him. He also noted that it was a “mañanit” and not a party.